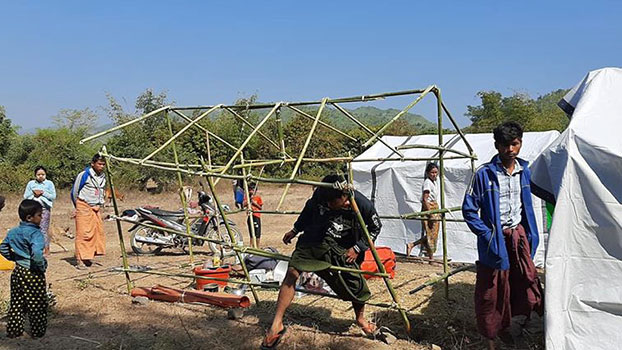 A man sets up a tent at an IDP camp in Sanyin village, Myebon township, western Myanmar's Rakhine state in an undated photo. Myanmar soldiers destroyed the camp on Jan. 25, 2020.
Photo courtesy of Thabawa Nadi/Facebook

Government troops arrived in Myebon’s Sanyin village at about 10 p.m. local time Sunday, firing guns in the air and pushing village authorities to close down the refugee camp situated on a community soccer field, said Ar Rakha, a monk who is in charge of the internally displaced persons (IDP) camp.

He said the soldiers physically destroyed the camp.

“They entered the village firing shots in the air,” he said. “The Myanmar military came into the refugee camp, took down the camp roof and walls, and burned them by the road. They said they didn’t want to see the refugees the next day.”

The troops did not give a credible reason for demanding the camp’s closure, Ar Rakha said.

The Sanyin Pin camp was opened on Jan. 17 to provide shelter to 375 local Rakhines who fled their homes when Myanmar troops moved into the area.

Buddhist monk Ashin Thabawa Nadi, who is helping the IDPs, said more than 50 soldiers and military officers from Light Infantry Battalion No. 66 are now stationed at what remains of the camp and have warned that they don’t want an IDP facility near their military camp.

“The military troops arrived at the village this afternoon,” he told RFA Monday. “This time, they didn’t carry out any physical destruction of the camp or engage in rude dialogues. It was not like yesterday.”

The soldiers told the monk that they wanted to review the list of IDPs staying there because the camp was not permitted by the regional security minister, the monk said.

“As we saw from their arm insignias, they are from Light Infantry Battalion No. 66,” he said.

“We have requested to see the official letter ordering the removal of the IDP camp with suggestions as to where to relocate it,” he said.

An order from the top?

Zaw Zaw Tun, secretary of the Rakhine Ethnics Congress (REC), a Sittwe-based organization that promotes ethnic rights in the state, also confirmed the soldiers’ presence in the village and their demand to close the camp.

“I am currently in Sittwe, but this news has been confirmed as true,” he told RFA.

“We are now contacting our sources to learn the details of the situation,” he added.

Pe Than, a lawmaker from Myebon township, said it is unknown which military official ordered the soldiers to remove the IDP camp.

“I don’t know whose orders they are executing, that of the regional commander or [other] top leaders,” he said. “We don’t know their intention either.”

Pe Than also pointed out that the troops did not question the camp’s IDPs.

“They didn’t do any investigations of the IDPs who have taken shelter there, so I think it might not be an order from the top.”

“We are observing the situation,” he added. “At the same time, we are helping the IDPs.”

‘Only some women left’

Colonel Win Zaw Oo, spokesman for the Myanmar’s military’s Western Command responsible for Rakhine state, said he had no information on the report.

“I don’t know about it,” he told RFA’s Myanmar Service. “I know there were battles in that area. It has been three days since the armed conflicts occurred in the area northeast of Sanyin village.”

Residents of communities near Sanyin village have fled to various IDP camps since Jan. 24 due to fighting between Myanmar forces and the rebel Arakan Army (AA), a predominantly ethnic Rakhine military, which have been engaged in intensified hostilities in northern Rakhine state for more than a year.

A resident of nearby Yaypoke village, who requested anonymity for security reasons, said only a few women stayed behind in his community when the soldiers moved into the area.

“In Yaypoke village, there are only some women left,” he said. “All males have fled the village. The military hasn’t threatened us yet, [but] they have come to live in the monastery and schools and are camping out in the village.”

The REC, which has been tallying numbers of dead and wounded during the past year of the armed conflict, put the number of IDPs at more than 100,000 as of early January.

Government officials have issued a lower estimate of 40,000 as of early 2020, because they only count those in IDP camps and not civilians who have gone to live with relatives or friends, according to the REC.

More than 100 civilians have died and 252 have been injured in the clashes as of Jan. 4, the REC told RFA in a previous report.