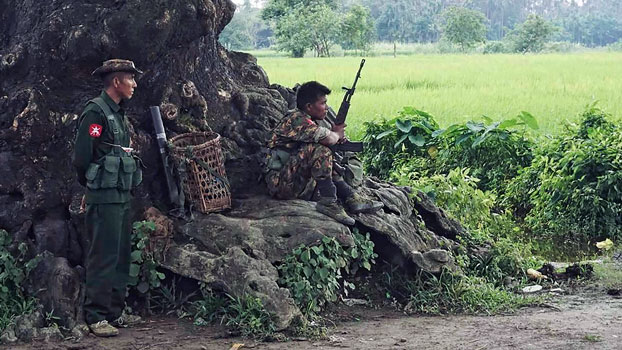 The Myanmar military has denied community leaders and NGOs access to civilians in war-torn Rakhine state’s Minbya township, who have been  displaced by local clashes between government soldiers and the rebel Arakan Army, a regional lawmaker said Friday.

The fighting, which began in the area on July 28, forced about 5,000 people from 10 of the township's villages to flee and seek shelter in internally displaced persons (IDP) camps, while trapping others in the conflict zone.

Humanitarian aids group estimate that more than 3,000 people who live in 30 villages located along Phongthar Creek in Minbya township are now trapped by the hostilities.

Rakhine state lawmaker Hla Thein Aung from Minbya township told RFA’s Myanmar Service that he tried to visit communities where villagers are trapped on Wednesday, but Myanmar troops refused to let him enter the areas.

Solders prevented a second attempt by him to reach the communities on Friday, he said.

“I tried to visit the villages again today, with other members of parliament, local authorities, and three Buddhist monks,” Hla Thein Aung said. “We traveled by motorboat.”

Hla Thein Aung said he saw a news report that military authorities had denied humanitarian aid groups access to villages in the conflict zone after his first failed attempt to visit the area was reported by the media.

“This time they didn’t give any specific reason for preventing us,” he said. “I overheard that the top authorities ordered them to stop us.”

The lawmaker said that while he did not hear any gunshots at the time, he and the others heard the sounds of heavy artillery being fired between 2 p.m. and 3 p.m., though they had been told that there was no more fighting in the area.

A separate team led by a Buddhist abbot from Rakhine’s Mrauk-U township tried to transport food supplies and relief aid to the villages in the area on an earlier date but was also prevented from going there, Hla Thein Aung said.

‘For their own safety’

“There is constant fighting and the firing of heavy artillery,” he said. “They were prevented for their own safety.”

The displaced and trapped civilians must rely on local NGOs to provide food and necessary living supplies.

“Neither state nor township-level authorities are able to visit the villages in the conflict area,” said Hla Maung, a humanitarian aid volunteer from Minbya town.

“They said the government cannot do anything for the people in the area since they are in the military operations zone,” he said.

Fighting between Myanmar forces and the AA, an ethnic Rakhine military group seeking greater autonomy in Rakhine state, escalated in the state in late 2018 and has displaced roughly 35,000 civilians, according to an estimate by the United Nations humanitarian affairs office.