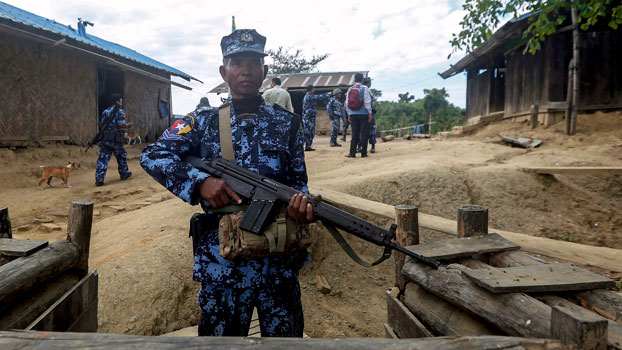 Five ethnic Rakhine villagers, including a schoolteacher, arrested last week have been charged under Myanmar’s Counter-Terrorism Law and were remanded in custody Tuesday at Buthidaung Township Court in war-ravaged Rakhine state, a military spokesman said.

Myanmar military spokesman Brigadier General Zaw Min Tun said they are being charged under the 2014 law because of credible evidence pointing to connections with the Arakan Army (AA), an ethnic Rakhine military that is fighting government forces in a quest for greater autonomy in Rakhine state and has widespread support from locals.

If found guilty, the five face sentences of 10 years to life in prison.

But AA spokesman Khine Thukha denied that the men have links to Arakan forces.

“This is completely wrong,” he said.

“The military has been holding a grudge against the Rakhine people and committing arbitrary arrests, torture, and killings,” he said.

Ba Than Maung, the father of Naing Aung Tun, went to the courthouse to see his son and later said the young man’s face showed signs of possible torture while in detention.

“We were not allowed to meet him,” he told RFA’s Myanmar Service. “I got a glance of him in the [police] van, and he has many bruises on his face. His face is pretty swollen. I think he has been beaten and tortured.”

Aung Thaung Shwe, a member of Myanmar's parliament from Buthidaung township, expressed concern for the safety of the detainees.

“I am deeply concerned that those detained might die from torture during the investigations,” he said. “We have seen similar incidents in other townships. We want it to be done properly in accordance with the law and with human rights regulations.”

“I am not aware of that,” he said. “We have handled the case according to the legal procedures.”

An announcement Monday by the military commander-in-chief’s office said the armed forces had investigated the detainees on Aug. 9 for unusual activities and found evidence of them communicating with the AA on their mobile phones.

The same day, Zaw Min Tun confirmed that Naing Aung Htun and San Maung from Kyaukyan village were being detained for questioning.

“There have been many mine explosions at the Kinchaung Bridge on the road that connects Buthidaung and Rathedaung townships,” he said. “The site is very close to Kyaukyan village.”

“The police are involved in the detentions,” he said. “We are investigating them and will release them if they are found innocent.”

‘No one informed us’

On Aug. 5, Myanmar troops arrested another primary school teacher, Nay Zaw Lin, who had been teaching children displaced by the armed conflict in Kyarnyobyin village, and charged him under the Counter-Terrorism Law after finding suspicious information about the military’s movements in the area on the his mobile phone.

Than Pe from Buthidaung township’s Education Department said authorities who arrested the teachers did not follow established procedures.

“Some of our employees have been arrested in the past for minor crimes like drug abuse,” he said. “They [authorities] always inform us by giving us a formal letter. But in this case, no one informed us in any way.”

“As a department head, I should have been informed about the arrests,” he said, adding that the lack of any formal notification means that his department cannot provide details to staff members or to higher management.

“Now all other education staff members feel unsafe, believing they could be arrested anytime,” Than Pe said. “Many are now talking about resigning from their posts.”

Zaw Min Tun said the military has the authority to arrest those who have connections to insurgent groups, without having to inform ministries other bodies.

The next court hearing for the five remanded detainees is scheduled for Aug. 27.