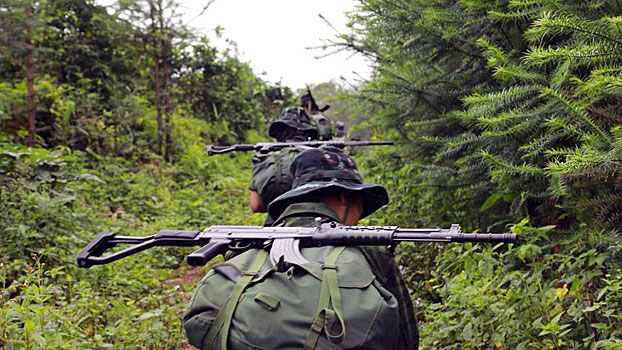 Myanmar on Monday designated the Arakan Army, an ethnic force engaged in a yearlong armed fight against the government, and affiliates as unlawful organizations and terrorist groups, state television reported.

An announcement broadcast on state owned MRTV and signed by Minister of Home Affairs Soe Htut said that Myanmar President Win Myint had decided to apply the Unlawful Associations Act to the AA and subsidiaries, including the United League of Arakan, for activities that disrupt the peace and stability of the state and public.

Earlier on Monday the AA had attacked a regional military training school in western Myanmar’s Rakhine state, sparking fighting in nearby areas that left casualties on both sides, spokesmen from the two armies and a local lawmaker said, in the latest deadly skirmish in a conflict that has killed dozens of civilians and displaced 140,000 villagers since the beginning of 2019.

"We want to say their classification does not affect our missions much," he added.

"We don't need the Burmese government's blessing to survive. As long as Rakhine people support us, we are a legal organization in Rakhine state," Khine Thukha said.

Monday morning's AA assault on the No. 9 military training school in Rakhine’s Minbya township prompted fighting between the two armies in at least three nearby locations with fatalities on both sides, said Myanmar military spokesman Brigadier General Zaw Min Tun.

“The AA attacked the military training school at 6 a.m.,” he told RFA’s Myanmar Service. “They have attacked us at at least three locations.”

Myanmar forces regained control of the areas around 11 a.m., he said, adding that there were casualties on both sides and that government soldiers seized the bodies of dead AA troops and some of their weapons.

Zaw Min Tun did not provide the numbers of deaths and injuries among Myanmar soldiers and said that the military training facility is not strategically important.

Khine Thukha confirmed the attack on the training facility, but did not state the number of dead and injured among the ethnic army’s ranks.

The clashes took place in an area about a 15-minute drive away from Kanni village tract on the Yangon-Sittwe highway, a major thoroughfare in the region, and occurred as a result of a military airstrike, said Rakhine state lawmaker Hla Thein Aung of Minbya township.

“I can confirm that this armed fighting occurred in response to the military’s airstrike on the nearby area,” he told RFA.

“A villager from Oakpho Taung village told me there were heavy artillery attacks near their villages,” he added. “When I call him again, I lost the phone connection.”

Zaw Tun, secretary of Rakhine Ethnics Congress (REC), a local relief group assisting some of the tens of thousands of civilians displaced by the conflict, said the military is increasingly using aircraft in its battles with the AA which have intensified since late 2018.

“Local villagers said the military has used fighter jets in some places,” he said. “They said it was three fighter jets that came one by one. They are also using the helicopters. In some places, the aircraft arrived in a group of as many as seven or eight.”

Zaw Tun predicted a further escalation of hostilities given the situation on the ground, including recent intense fighting between the AA and government troops in Paletwa township of neighboring Chin state.

A government-ordered internet service shutdown in eight townships in northern Rakhine and in Chin’s Paletwa township has kept residents in the dark about developments concerning the hostilities and the coronavirus pandemic as well as prevented them from conducting business, local people said on the nine-month anniversary of the web blackout.

"We cannot know what is happening in these villages. There are delays in sending injured patients to the hospital because of the information blackout," said Oo Tun Win, a lawmaker from Rakhine's Kyauktaw township.

"The internet shutdown has severely affected the people on the ground," he said. "As we speak, I heard some villages are on fire, but we can no longer get the latest information on the situation of the village and who is responding to the fire in real time."

"The armed groups' right violations have become more aggressive during the internet blackout," he added.

Soe Kyaw Myint, a school teacher in Rathedaung township, said she believes the internet shutdown is part of the reason that "as many as 95 percent of people here never heard of the coronavirus."

"The majority of people don't know about the coronavirus and are not interested in how to protect themselves," she said. "I think they don't have an awareness because of the information blackout caused by the internet shutdown."