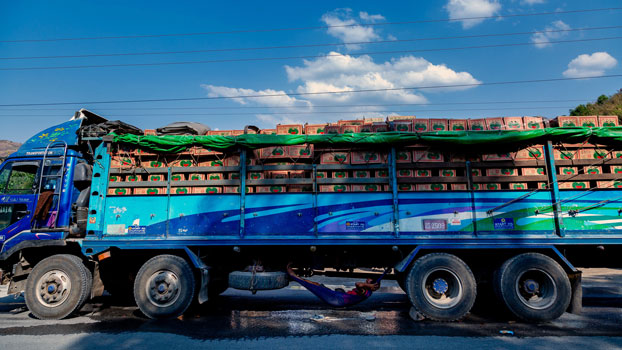 A driver rests under his truck as he waits in line with others to enter China near Muse in Myanmar's northern Shan state, April 20, 2020, after China reduced the number of trucks allowed to enter per day to contain the spread of the coronavirus.
AFP

Myanmar farmers serving the China market have lost their entire seasonal crops of melons, corn, and tomatoes as cross-border produce trade has dried up amid the coronavirus outbreak, with some growers piling up debts to Chinese lenders, they told RFA on Thursday.

Chinese traders loaned money to Myanmar farmers to grow watermelons, corn, and other produce for export to China, but the COVID-19 outbreak and countermeasures in both countries to contain it have halted the flow of buyers to land borders, where truck traffic is allowed but with cumbersome restrictions.

With fruit and vegetables rotting or being intentionally destroyed, some growers say they have fallen into heavy debt and are unsure whether they can repay what they owe to their lenders without income from this season’s harvest.

“This year we had to let the watermelons rot due to financial problems,” said Lay Maung, a farmer from Salingyi township in northwestern Myanmar’s Sagaing region.

“But there were no buyers,” Lay Maung said. “Now, I am in debt to the government’s agricultural bank and to fertilizer companies.”

Farmers export watermelons and muskmelons to China between October and the end of May, before the harvest season in China begins in June.

Naing Win, chairman of the Myanmar Melon Growers, Producers, and Exporters Association, told the Myanmar Times in March that the seasonal loss of melon exports was estimated to reach about 90 billion kyats (U.S. $63.2 million) due to the COVID-19 outbreak.

Myanmar corn growers in northern Shan state say they have had to throw tons of produce into the Shweli River that forms part of the boundary between Myanmar and China because of a lack of buyers from across the border.

Corn is not usually sold to China through official channels, so Myanmar farmers export it though the black market, they said.

“We will be in debt to the traders if China doesn’t buy our corn,” said Sai Maung Oim, a corn grower in the trading hub Muse in northern Shan state.

“For all the cornfields in Muse and Namhkam townships, there will be billions of kyats lost,” he added.

Tomato growers report that they are also facing the same problem.

“This year, our usual customers are not coming to buy tomatoes,” grower Mya Lay said.

“While we were waiting for our buyers, a lot of tomatoes had to be destroyed,” he said. “Even when we tried to sell them to nearby villages, we were not allowed to enter.”

Chinese authorities have restricted drivers from China from entering Myanmar and have limited the number of trucks from Myanmar that can cross the border each day to prevent the spread of the coronavirus.

Since April 1, Chinese authorities have required Myanmar traders in abutting northern Shan and Kachin states to pay Chinese drivers to transport truckloads of rice and produce from border crossings to local cargo facilities.