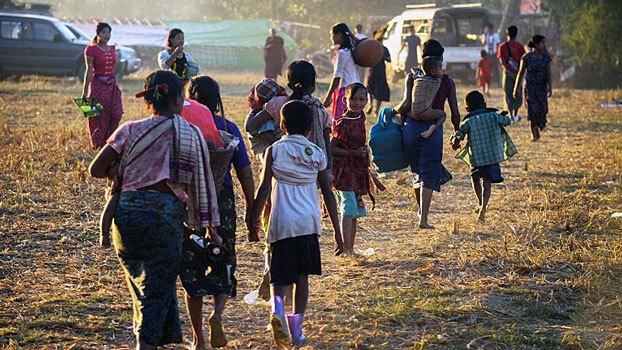 More than 92,500 civilians have been displaced by armed conflict in Myanmar’s Rakhine state, where hostilities between government forces and the rebel Arakan Army have raged for a year, according to a tally issued Wednesday by a relief group documenting the number of villagers who have fled their homes.

Zaw Zaw Tun, secretary of the Rakhine Ethnics Congress (REC) and a relief volunteer in the region, said his organization has been surveying the number of ethnic Rakhine civilians who have fled their homes because of armed clashes.

“We are trying to survey the IDPs [internally displaced persons] as accurately as possible,” he told RFA’s Myanmar Service. “So far, we’ve recorded more than 92,500 IDPs.”

But he added that a true estimate would be difficult to state because of a shortage of people on the ground to count the number of IDPs.

After fighting intensified in northern Rakhine state in late November, tens of thousands of residents from villages in Rathedaung, Buthidaung, and Myebon townships left their communities to seek safety elsewhere, he said.

Tens of thousands of civilians from other townships in northern Rakhine also fled the fighting during the past year.

Most of the displaced residents are now staying with friends or relatives because the township has no designated IDP camp, they said.

Entire villages have abandoned Rathedaung communities on account of nearby artillery blasts and skirmishes, lawmakers said.

“The villagers fled when the shelling blasts hit the villages or when military troops arrived or when there was armed fighting near their village,” said Khin Maung Latt, a lawmaker who represents the Rathedaung township constituency in Myanmar’s upper house of parliament.

When Myanmar soldiers arrive in communities, they detain and interrogate villagers to determine if they have connections to the Arakan Army (AA), which is fighting for greater autonomy in the state.

“Sometimes they have taken some of the villagers, so the villagers are scared and flee whenever they come,” Khin Maung Latt said.

The most intense battles so far have occurred in Rathedaung, with navy ships and Myanmar soldiers in neighboring Buthidaung firing artillery to assist ground troops, he said.

“Only a meager amount of support comes from the government,” he said. “The rest comes from private donors.”

“The IDPs certainly have problems making ends meet,” he said. “This is not enough to cover their living costs.”

In addition, humanitarian groups said donors are sometimes stymied by local bureaucracies because they must obtain permission from township administrators before they can make donations.

Win Myint, Rakhine state’s minister of municipal affairs, said the government provides aid to IDPs based on lists it receives from township administrators.

“We are providing rice rations to IDPs,” he said. “When the number of IDPs surged, there were delays in reporting the new IDP population. I think these are only temporary shortages. ”

AA spokesman Khine Thukha said attacks by the Myanmar military with the heavy shelling of villages are responsible for the growing number of IDPs.

“There are specific reasons why the villagers are too scared to live in their homes,” he said. “When the Myanmar military takes over strategic locations, they continually fire artillery shells into nearby villages. Their indiscriminate firing has caused villagers to flee.”

In response, Colonel Win Zaw Oo, spokesman for the Myanmar military’s Western Command, said the AA should avoid starting skirmishes near villages so civilians will not be in the line of fire.

“The AA shouldn’t initiate fighting near villages,” he said. “If they start firing, we have to fire back, and local villagers will pay the price. It depends only on the AA. Don’t start an armed fight using the villages as cover.”

The AA should rethink about its policy and strategy. The AA does not favor Rakhine people and other ethnics living in the Rakhine State and Chine State. The AA was doing Rakhine peoples and other ethnic minority peoples’ lives miserable and sending them to the hell. The AA cannot blackmail the Burmese military by kidnapping public servant, politician and off duty servicemen.
The Guerrilla warfare against the Burmese military is okay, but it should be in the forest and not near the villages as currently the AA was doing. The AA should not use civilians as a shield and should not go to hide among villagers after attack on Burmese army. The Burmese soldiers will be looking for the AA soldiers among the villagers. There will be innocent men will be rounded up by Burmese soldiers and interrogating them by torture methods.
Who will suffer most by the AA’s guerrilla warfare against Burmese Military near the village?
The AA must release all kidnap victims and let reunite with their family. These kidnap victims were not POW and so, they must release at once.
If the AA leaders think they are wining the war over Burmese Army and then they are absolutely wrong. The AA leaders should also think about cost of lives and peoples who becoming refugees and miserable. Their lives may not be perfect, but better condition than what they are facing an uncertain future.
The AA will never win the war over Burmese Military and never achieved its goal by any kind of warfare.
Now, nearly 100,000 civilians were homeless, miserable and no prospect of going home near the future. They cannot work and no income, and no hope.
The AA leaders must accept the reality and truth. Only peace will give you win.