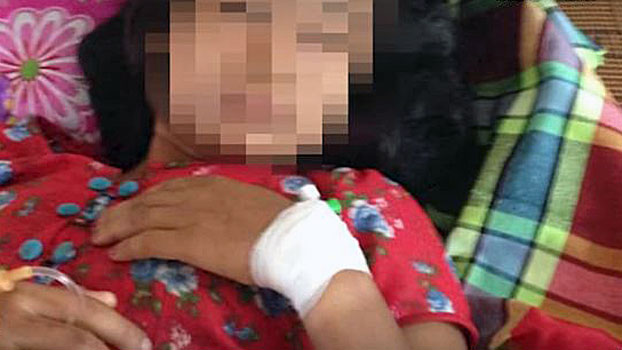 A teenager injured during a clash between government soldiers and the Arakan Army near Kyauktaw town in western Myanmar's Rakhine state is transferred to Sittwe General Hospital, April 2, 2020.
RFA video screenshot

Five civilians have been killed and eight others injured amid fighting between Myanmar soldiers and the rebel Arakan Army near Kyauktaw town in war-ravaged Rakhine state, residents and members of humanitarian groups said Thursday.

The battle on Wednesday, which flared up as the U.S. State Department called on the warring sides to end hostilities and for Myanmar to permit deliveries of international humanitarian aid, lasted 30 to 45 minutes, with reports of government soldiers firing indiscriminately at areas where civilians reside, they said.

Five people have died so far — four yesterday and one this morning,” said Nyi Pu, chairman of the local humanitarian organization Phyu Sin Myittar. “Eight others were injured.”

Among the five who died were a 14-year-old girl, three elderly men, and woman who either was middle-age or a senior citizen, he said.

Two members of the same family were killed by an artillery blast while they were inside their home in Anae Chaung village, Nyi Pu said. The other three who died were laborers from Ywama Pyin village who worked at a brick-making firm in Pyitaw Thar village.

The eight injured civilians were admitted to Kyauktaw Hospital. A 17-year-old girl among them was transferred Thursday morning to Sittwe General Hospital for emergency treatment, he said.

Tun Khin, a senior citizen from Kyauktaw, said Myanmar soldiers entered the area and fired at random, aiming at the upper levels of houses in town.

“They fired their guns at random from their military vehicles as well while they were walking through the neighborhood,” he said. “The military troops stationed in the Kyauktaw mountains also fired heavy artillery as naval vessels were stationed in the Kaladan River.”

“They fired from 5:15 p.m. until 6 p.m.,” he said. “At least 20 houses in the town were hit by the artillery blasts. Another military regiment waiting at the bridge also fired its guns endlessly.”

“We assumed it was mutual firing between the military and AA troops,” Tun Khin added. “We were not able to go and see the area to confirm what happened.”

Another local resident who requested anonymity for security reasons said the fighting started after AA soldiers ambushed a military battalion moving in from Thayat Oak village in an area about two miles from Kyauktaw town.

“Yesterday, a military battalion was mobilizing away from the Thayak Oak village area,” he said. “At that time, AA soldiers ambushed them.”

“After we heard the gunfire from the fighting, other military troops from the Kyauktaw mountains started firing their rocket launchers.”

Kyauktaw township has been the scene of some of the most intense fighting between the two armies in the past 15 months and is one of nine townships in northern Rakhine and neighboring Chin states where the Myanmar government has blocked internet service as a security measure.

At least 63 civilians have been killed and more than 160 people have been injured during clashes between government and AA troops in northern Rakhine and in Chin’s Paletwa township between Feb. 26 and Apr. 1, according to an RFA tally.

Fighting since the beginning of 2019 has displaced about 157,000 in Rakhine state, with significant increases in the number of civilians who have fled their homes in Kyauktaw, Minbya, and Ratheduang townships in March, according to the latest figures from the Rakhine Ethnics Congress (REC), a local humanitarian relief group.

“There were 128,000 IDPs [internally displaced persons] in the state by the end of February,” said REC secretary Zaw Zaw Tun. “By the end of March, there were nearly 160,000 with an increase of 30,000 IDPs. Kyauktaw township has seen largest increase, by tens of thousands. There also have been increasing IDP numbers in Minbya and Rathedaung.”

Maung Hla Kyaw, a Rakhine state lawmaker from Kyauktaw township, said about 10,000 IDPs have taken shelter in camps in Kyauktaw town, while others are in villages.

“All IDP camps, the primary school, city hall, Kangyi Shin Pagoda, and Buddhist monasteries are full of IDPs,” he added.

Zaw Zaw Tun said concerns about the spread of the coronavirus have caused delays in receiving humanitarian assistance from international NGOs.

“We have requested more assistance for these townships from the International Committee of the Red Cross, World Food Programme, Agriculture Organization of the United Nations, and other relevant international NGOs,” he said.

Ann Thargyi, a civilian who is helping IDPs in Minbya township, emphasized the need for preventive gear against the spread of the coronavirus.

“The IDPs are in urgent need of coronavirus protection kits, guidelines, and education as to how they can protect themselves,” he said. “So far, none of the international NGOs or humanitarian groups has come to the IDP camps to conduct this kind of training or to provide protective gear.”

The government’s mobile internet service ban in northern Rakhine has prevented the dissemination of information about the spread of the coronavirus, which has infected 20 people and killed one as of Thursday.

A civilian told RFA Thursday that mobile internet service has been unavailable in Ann township, which has not been affected by the fighting, since March 31.

A group of ambassadors from Western countries in Myanmar, including the United States, issued a statement Wednesday calling for a global cease-fire and the free flow of information amid the spread of the coronavirus, also known as COVID-19.

“We are deeply concerned about the high level of fighting, casualties, and civilian displacement occurring in Rakhine and Chin states, and the threat of further conflict in other areas,” they said.

“The free flow of information through the internet and the media is also essential,” the statement said. “For the sake of families across Myanmar we support all calls for a cessation of hostilities between the Myanmar military and armed organizations, resolution of grievances through dialogue, and a lifting of any internet and media restrictions as well.”

“COVID-19 does not discriminate on the basis of ethnicity, nationality, religion, or social status,” it said.

The U.S. State Department issued a separate statement the same day, expressing deep concern over the escalating violence in northern Rakhine and Chin states. The country called on the warring sides to end their hostilities and on the Myanmar government to restore internet access and permit deliveries of international humanitarian aid.

“The current situation is exacerbated by ongoing restrictions on humanitarian and media access, and the prolonged internet blackout, which cut communities off from lifesaving assistance and vital information,” the statement said.

“Access to humanitarian assistance and information are all the more important during the COVID-19 pandemic,” it said.

The U.S. has provided more than U.S. $820 million in humanitarian aid to Myanmar following the onset of the brutal military crackdown on Rohingya Muslims in northern Rakhine state in 2017 that left thousands dead and drove more than 740,000 others to Bangladesh, the statement said.

The Myanmar military declared a unilateral cease-fire for nine months in 2019 in some parts of the country, excluding Rakhine state, but the truce was broken and fighting has continued.