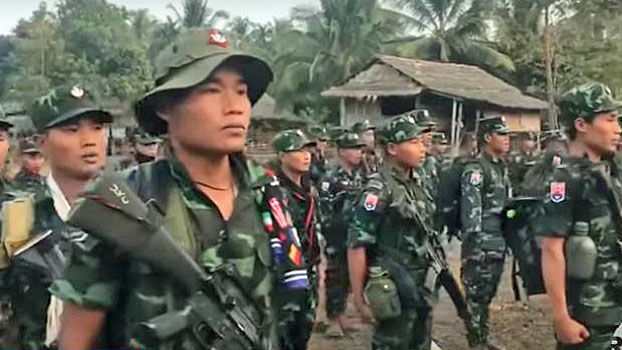 About 300 ethnic Karens have been displaced by armed conflict in Hpapun district of southeastern Myanmar’s Kayin state following hostilities in early February between government forces and rebel soldiers, an official from an ethnic armed group said Monday.

Padoh Saw Tar Doh Moo, secretary of the Karen National Union (KNU), whose soldiers are engaged in combat with Myanmar forces despite a cease-fire pact, said hundreds of villagers fled because of heavy artillery fire by the government army into KNU-controlled areas during the first week of February.

“They fired heavy shelling indiscriminately, and the people were terrified and fled,” he said. “It happened more than three times. It’s even happened despite the cease-fire agreement.”

“In some places, they have burned farms,” he said of Myanmar forces. “In a way, they are launching an operation similar to that of the four-cuts strategy.”

He said the displaced civilians are now at risk of a food shortage.

Myanmar military spokesperson Brigadier General Zaw Min Tun confirmed the armed fighting in the region but denied the KNU's accusation that government soldiers had fired mortars into villages without provocation.

“We didn’t fire heavy artillery or burn property,” he said. “There has been no such thing. We only fired into areas where [rebels] fired at us first.”

Relations between the KNU, Myanmar’s oldest ethnic rebel group, and a Myanmar military front-line battalion suffered a blow after the killing of a Myanmar officer by a landmine explosion in late January in an area where the KNU’s 5th Brigade is active.

Myanmar accused the KNU of targeting government soldiers tasked with road construction activities in territory controlled by the 5th Brigade, which the rebel force agreed to allow.

After the landmine explosion, the military blamed the officer's death on KNU, which in turn said that the blast could have occurred because the soldiers did not adhere to the agreed upon route for the roadwork.

The KNU then accused Myanmar forces of surveilling its headquarters with drones, though Zaw Min Tun said the unmanned aerial devices were being used for ground surveys for the road construction work.

Myanmar political analyst Maung Maung Soe said the two sides must focus on ending the fighting and get back on track with the nationwide cease-fire agreement (NCA) they signed in 2015.

The NCA prevents military deployment, surveillance activities, reinforcements, armed fighting, the use of landmines and violence, and the damage of physical properties in all cease-fire territories.

“For now, both sides refuse to compromise,” Maung Maung Soe said. “Mainly, they can’t settle on the construction of a new road, which has led to armed fighting.”

“A commanding officer from the military has already been killed,” he added. “They are still firing artillery, and hundreds of displaced people have fled. Those who are responsible for the NCA should be more flexible.”

The Karen Women’s Organization (KWO), a civic group with more than 60,000 members, has meanwhile called for a boycott of Myanmar companies with connections to the military, saying that the army uses profits from the businesses to buy weapons and to finance government army operations.

“The military’s duty is to protect the country, but the military is engaging in business and purchasing weapons with money earned from the businesses,” said KWO vice chairwoman Naw Alice. “Their businesses are financing armed conflict in ethnic areas, so we would like to urge a boycott of the products from the military-owned businesses.”

A statement issued by the KWO warned international aid agencies and embassies to avoid financing or doing business with military-owned companies.

Myanmar military spokesman Brigadier General Zaw Min Tun said profits from such companies are used for the benefit of service members and their families.

“Military-owned businesses like the Union of Myanmar Economic Holdings Ltd. and the Myanmar Economic Corporation are intended only for the well-being of military members,” he said. “They are not intended to finance weapons purchases.” 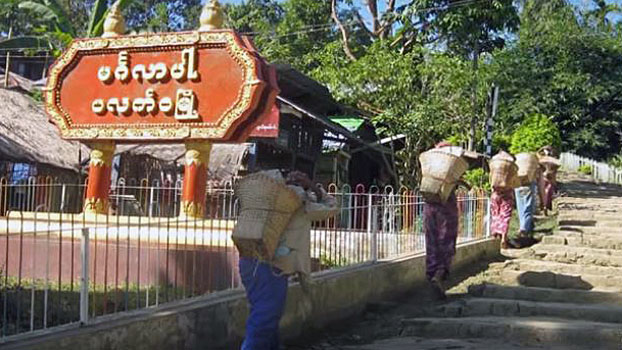 Ethnic Chin villagers carry food supplies in baskets to their homes in a village in western Myanmar's Chin state in an undated photo. RFA video screenshot

Ethnic minority civilians displaced by a spillover of armed conflict from western Myanmar’s Rakhine state meanwhile are feeling the pinch of dwindling food supplies amid ongoing clashes between Myanmar troops and the rebel Arakan Army (AA).

The fighting, which has spread into neighboring Chin state, has affected residents of Paletwa township, where the government army has imposed restrictions on the transport of rice in an effort to cut off food supplies to AA forces based there.

Fighting occurs on an almost daily basis along the Kaladan River between Rakhine’s Kyauktaw township and Paletwa, for which the government recently rationed 1,000 bags of rice for displaced civilians, said Salai Aikzet Khin, a former Chin state government minister.

“We will have a shortage of rice if no more rice supplies arrive in Paletwa in the next four or five days,” he said. “Rice is the most important staple food, and the government needs to act urgently to supply it through a secure channel.”

Local ferries stopped operating along the Kaladan River in early February, while the main motorway has been closed since the last monsoon and during nearly two weeks of fighting along the stretch between Kyauktaw and Paletwa, limiting the movement of people and goods to and from the area.

At the same time, scores of travelers and visitors are stranded in both Paletwa and Kyauktaw townships.

“I heard that over 100 people from Paletwa are stranded in Kyauktaw, including government staffers and nurses,” said Paletwa resident Peter Lwel Luu who is currently in Yangon. “There are also 100 people from Rakhine state and other parts of Myanmar stranded in Paletwa.”

“The military isn’t preventing them from transporting rice,” he said. “AA troops inspect every motorboat going upstream. They steal the rice bags and cash from the passengers.”

“We don’t steal the property of civilians, but we do confiscate property and food supplies belonging to the Myanmar military,” he said. “We do so only when we can confirm they are indeed military property.”

Paletwa is also one of five townships in the region where internet access has been reblocked since Feb. 3 on account of the armed conflict, and landline phones only operate in the main town.

The internet shutdown was first imposed by the Myanmar government in June 2019 for “security requirements and the public interest,” but was lifted in September during peace discussions between the Myanmar military and ethnic armed groups.

On Monday, independent experts appointed by the U.N.’s Human Rights Council expressed serious concerns about the killing and displacement of civilians during fighting between the military and the AA amid the information blackout in northern Rakhine and Chin states.

“We are especially fearful for them as violence has increased in the areas where an internet shutdown was recently reimposed,” they said in a statement. “It is well known that human rights violations and abuses occur during security operations in Myanmar.”

Reports out of the region indicate that in the last 10 days up to 1,100 people have been displaced, including 600 civilians from We Ma Kya village in Kyauktaw, they said.

The statement also said that at least seven civilians had been killed, including three Rohingya in Buthidaung township, and up to 50 injured, including 21 ethnic Khami children hit by gunfire in a village in Buithdaung on Feb. 13.

It also cited the death of a Rohingya boy from Kyauktaw township who died of injuries sustained during shelling, and seven civilians who were reportedly wounded.

“We are gravely concerned that children are being killed and injured, and that reports suggest weapons are being used indiscriminately, and precautions are not being taken to protect civilians and civilian objects such as schools and monasteries, in violation of international humanitarian law,” the experts said.