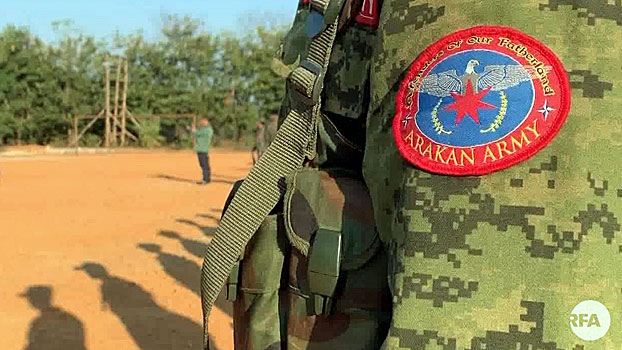 The Arakan Army's insignia is seen on the uniform of a soldier at an undisclosed location in an undated photo.
RFA

A fierce clash between the Myanmar military and Arakan Army (AA) has prompted thousands of civilians to flee their homes in 10 villages during exchanges of gunfire in war-stricken Rakhine state, leaving some trapped in the conflict zone, a regional lawmaker, military spokesman, and humanitarian workers said Monday.

About 5,000 people who have fled their villages in Minbya township since July 27, when military units entered their communities, are now living in internally displaced persons (IDP) camps. Others are staying with relatives or have camped out in forests, they said.

The fighting began July 28 and has continued until now, they said. It was not immediately clear if there have been any casualties.

“Almost everyone from these villages has fled,” said Rakhine state lawmaker Hla Thein Aung from Minbya township. “Some villagers are still trapped. Some are staying at their relatives’ houses. About 5,000 are taking refuge in nearby IDP camps.”

A resident of Minbya’s Kalama Taung village who declined to give his name fearing retribution said his neighbors ran away as soon as government soldiers entered the community.

“We have to run out of fear of death by heavy weapons whenever we have fighting in our area,” he told RFA’s Myanmar Service. “We also have to run when the government army comes into the villages and arrests us on suspicion of supporting the AA.”

Myanmar soldiers have rounded up and detained villagers in other areas of the region to interrogate them about possible connections to the AA, an ethnic Rakhine military group seeking greater autonomy in Rakhine state. About 15 villagers have died while in military custody or after being released.

State lawmakers have urged the government to address and resolve the IDP issue by submitting proposals during parliamentary sessions, but their efforts have fallen on deaf ears, Hla Thein Aung said.

“When we talk to regional authorities, they can’t protect people,” he said. “We don’t know what to do.”

The number of civilians displaced by an escalation of hostilities between Myanmar forces and the AA since late 2018 in Rakhine and in neighboring Chin state stood at about 35,000 before the latest round of fighting.

With most of the conflict zone off limits to nearly all humanitarian groups, many IDPs staying in temporary camps must get by on scarce amounts of relief supplies.

Zaw Win Oo, however, said that the Myanmar military is not preventing aid workers from entering conflict areas.

“We don’t restrict anybody from traveling to help IDPs,” he said. “Any NGO can go and help them if the state government allows them.”

Ann Thargyi, a civilian who is helping a group of about 1,500 IDPs, said the latest clash in the ongoing hostilities between the two sides could not have come at a worse time of the year for the villagers, most of whom are farmers.

Ye Min Oo, an administrative officer from Rakhine state's Disaster Management Department, said officials planned to provide rice to Minbya township’s IDPs for one month, but they now face difficulties in doing so because of an ongoing internet blackout.

The Myanmar government ordered in June that internet service be suspended in eight townships in Rakhine, including Minyba, and in one township in adjacent Chin state for security purposes during the armed conflict.

“Because we have no internet in the region, it is very difficult to do anything, including withdrawing money from the bank,” Ye Min Oo said. “Our fax machine doesn’t work now.” 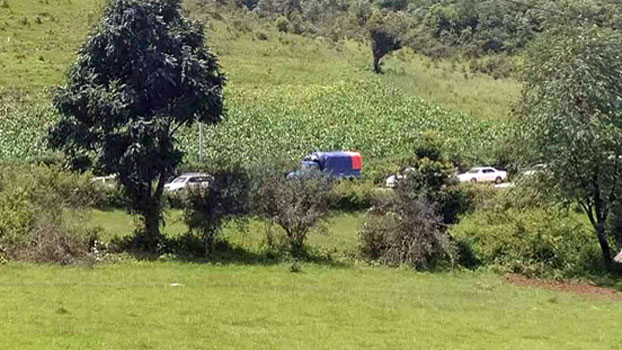 Vehicles are backed up along a road in Kutkai township in Myanmar's northern Shan state, during an armed clash between government forces and the Ta’ang National Liberation Army, Aug. 5, 2019. Credit: Photo courtesy of a commuter

On Monday, the Ta’ang National Liberation Army (TNLA) forced about 200 people traveling along a road between Tarmoenye and Kutkai in northern Shan state to stop for several hours until intense fighting with Myanmar troops subsided, a commuter and spokesmen from both militaries said.

“The TNLA closed Tarmoenye Road at about 8:30 a.m. because of nearby fighting with the Tatmadaw [Myanmar military],” said the commuter who declined to be named fearing retribution.

“All the traffic was stopped before it could reach Mawhan village, and we could hear [the firing of] heavy weapons exploding in the distance,” he told RFA.

The road was reopened in the afternoon when the clash ended. It was the third such skirmish to occur between the two armies in the area between Tarmoenye and Kutkai near the Thanlwin (Salween) River since Sunday, sources said.

TNLA spokesman Major Mai Aik Kyaw, said one half-hour skirmish occurred near Namkyon village at 6:25 a.m., and another raged near Tarmoenye Road from 7 a.m. to 10 a.m.

“So we stopped the travelers for their safety,” he said. “There are currently about three military columns from the Myanmar military’s Light Infantry Division 99 in the region.”

Military spokesman Brigadier General Zaw Min Tun confirmed two of the clashes — one near Mohan village in Tarmoenye subtownship and the other east of Tarmoenye.

“It was all because of the TNLA trying to expand their territory to the west,” he said. “They have their own self-administrative area, and yet there have been about 200 such incursions during the past two months.”

“We haven't got details about this morning’s clash,” he added.

The TNLA is one of four ethnic armed groups that comprise the Northern Alliance with which the Myanmar government is trying to reach a peace agreement, but the parties have yet to agree on a date and a venue for the talks.

Fighting has ensued despite a temporary unilateral cease-fire declared by Myanmar forces in five regional command areas, including Shan state. The cease-fire will end on Aug. 31.