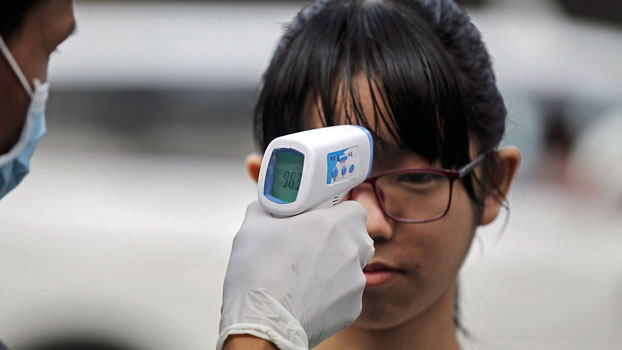 A member of the Yangon City Development Committee takes the temperature of a girl during a public awareness campaign for the prevention of the coronavirus at a market in Myanmar's commercial capital Yangon, March 21, 2020.
AFP

In the era of the coronavirus in Myanmar, online recordings of voices claiming to be those of government officials warn listeners that residents in the commercial hub Yangon have been infected by the contagious pathogen.

Online posts advise people to drink hot water or alcohol to cure the virus or to keep it at bay. Other recordings tell people to hang their clothes outside so passing helicopters can douse them with germ-killing pesticides.

They all have circulated on Facebook, the social media platform of choice for most of Myanmar’s estimated 54 million people, about 90 percent of whom use mobile phones to get news and other information.

Misinformation and fake news about the spread of the coronavirus, officially known as COVID-19, has quickly proliferated on Facebook despite a pledge by the government to fight it amid Monday’s revelation of the country’s first confirmed cases of the viral infection.

The government announcement came after weeks of officials downplaying COVID-19's risk to the country, and as neighboring nations saw their infection counts spike and braced for the return of thousands of migrant workers.

Dr. Htoo Myint Swe, assistant director of Myanmar’s Ministry of Health and Sports (MOHS), who is responsible for a public awareness information team that provides updates about the coronavirus pandemic, has urged people to check the ministry’s website for reliable information.

“The most important thing is that when you hear a rumor, you must check the MOHS official website and Facebook page,” he told the online journal The Irrawaddy in a March 20 interview.

“When it comes to fighting fake news, our team has a responsibility to give the public real information,” he was quoted as saying. “We have to act as a watchdog for all information related to COVID-19 on social media among Myanmar users.”

As of Friday, Myanmar reported five confirmed COVID-19 cases, with 21 people suspected of having the disease undergoing diagnostic testing in hospitals, according to the ministry.

Myanmar authorities will investigate and prosecute those who spread false news about the coronavirus to cause fear and panic among the public, said government spokesman Zaw Htay on March 13.

Yet, the warnings appear to have had little effect either on the general public or on businesspeople who are uploading photos they claim to be related to the pathogen’s spread and posting misleading information and advice, observers say.

“News of viral infections such as pictures and videos are being spread among the people,” said Zayar Hlaing, secretary of the Media Ethics and Development Committee of the Myanmar Press Council, prior to the government's announcement Monday of the first two confirmed COVID-19 cases.

“Female and male voice files are being released, saying that there are confirmed cases of coronavirus infections and telling people to hang their clothes outside so that helicopters can spray pesticides on them at midnight,” he said.

Sellers of sanitizing products are also posting fake news online to increase their sales, he said.

“To instill additional fear, some have even used old photos of people running and of deaths in hospitals, claiming that the virus has caused the events in the photos,” Zayar Hlaing said.

“Authorities have stated that they have notified the responsible parties to stop releasing fake news,” he added.

No details on punishment

Activists have encouraged authorities to crack down on those who intentionally spread phony reports and rumors, but not to target those with poor social media literacy.

Htet Htet Aung, a member of the Myanmar Information Development Organization, said she requested that people who unintentionally share fake news be exempted from punishment.

The government has not yet released further details on punishments, though it has discussed prosecuting offenders.

Myanmar rights attorney Robert San Aung said those who spread fake reports about the coronavirus could be criminally prosecuted under laws on communication and electronic transmissions.

Myanmar has had well-documented trouble with disinformation on Facebook, in particular with anti-Muslim reports and hate speech directed at the persecuted Rohingya minority group that contributed to violence targeting them in recent years.