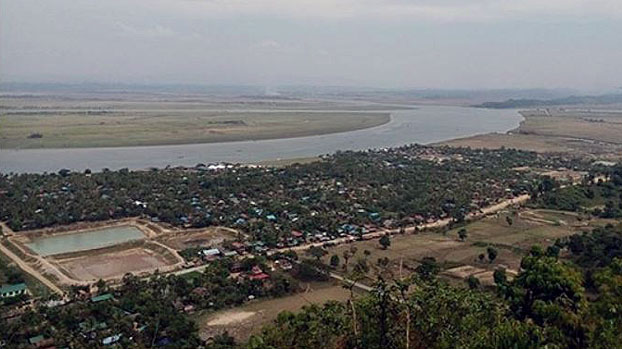 An aerial view of Minbya township in western Myanmar's Rakhine state in an undated photo.
RFA

More than 1,000 civilians in Minbya township have been displaced by fighting between Myanmar forces and the rebel Arakan Army in the latest flare-up in a conflict that has raged in Rakhine state for more than a year and uprooted 140,000 people, local villagers said Wednesday.

Villagers from five communities in the township fled when Myanmar soldiers open fire in their areas, they said.

“People from Kyautmaw, Phone Thar Paletaung, Kwa Sone, Taung Pauk Kay and Sattara villages fled from their homes to other villages” said an area resident who declined to give his name out of fear for his safety.

“We don’t want the military to open fire on villages,” he said. “The villagers are worried about getting into trouble, [but] people don’t know anything.”

Both the AA and Myanmar soldiers have apprehended villagers they believe may be abetting the enemy. Civilians have reported that government troops have interrogated and at times tortured villagers in an effort to find people who are helping the AA.

Myanmar soldiers “opened fire on Kyautmaw and Taung Pauk Kay villages, and the villagers ran away,” said a resident of Kyautmaw who also declined to give his name out of fear for his safety.

“A military convoy is near Phone Thar Kwa Sone village,” he added. “We don’t know where they were shooting, but bullets landed on our house in Kyautmaw village. We didn’t leave when we heard that the military convoy was coming, but we fled when they opened fire on the villages.”

Thursday marks the second time that residents of the villages have been forced to flee their homes amid the 15-month-old conflict. They also left their homes in June 2019, local residents said.

Myanmar military spokesman Brigadier General Zaw Min Tun said that the government army was not engaged in any battles in Minbya township.

“There is no fighting in that area. We had fighting in the Paletwa area,” he told RFA’s Myanmar Service, referring to hostilities in a township in neighboring Chin state.

On Monday, a Myanmar military airstrike following fierce fighting killed a child and wounded 15 people in a village in Minbya township, hours after the government formally branded the AA an unlawful association and a terrorist group.

The Myanmar military confirmed the use of helicopters to return fire against the AA, which conducted an attack on a military training school, but denied that soldiers bombed the village.

Armed conflict intensified in late 2018 as the AA ramped up its efforts to gain greater autonomy for the ethnic Rakhine people in the state.

Clashes between Myanmar and Arakan forces have recently increased in other areas of the state and in Chin’s Paletwa township, said Zaw Zaw Tun, secretary of the Rakhine Ethnics Congress (REC), a Sittwe-based NGO that tracks the number of displaced civilians.

“There has been more fighting along the river road from Kyauktaw township to Paletwa and in villages in Rathedaung, Buthidaung, Myebon, and Minbya townships,” he said.

“Many villagers have been fleeing because of the fighting and the government army’s use of Air Force and Navy units,” he added.

More than 50 people have been killed amid the fighting between Feb. 26 and March 24, and more than 150 others have been injured, according to the REC.

The REC puts the number of displaced civilians at more than 140,000, counting people who are in displacement camps as well as those who have taken shelter in Buddhist monasteries or in the homes of friends and relatives.

The Rakhine state government list says there are about 60,000 displaced civilians living temporarily in 131 camps in the northern part of the state.

Kyaw Min, director of Rakhine state’s Disaster Management Department, said his team is doing the best it can to assist displaced civilians despite obstacles.

“We have many difficulties and challenges in our department,” he said. “We are doing our best, although transportation is bad and the security situation is not safe.”

Kyaw Min also said his department has asked the state’s General Administration Department to distribute aid to locals who show up at its offices.