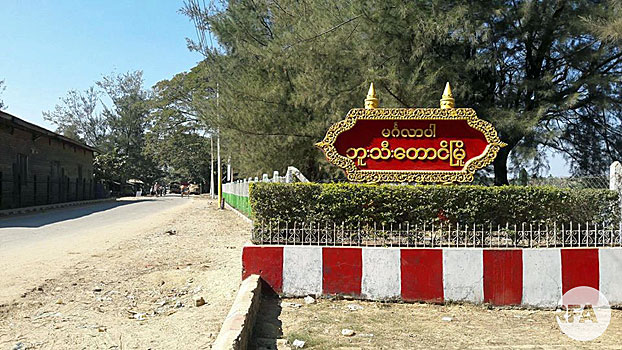 A sign marks the entrance to Buthidaung township in western Myanmar's Rakhine state in an undated photo.
RFA

Intensified fighting between an ethnic armed group and Myanmar forces in northern Rakhine state has driven more than 300 villagers in Buthidaung district to flee to safety, causing further upheaval in one of the areas affected by a violent crackdown on Rohingya Muslims, a local village head said Friday.

The latest round of clashes between the Arakan Army and national military in the region forced 330 residents from Thabyu Chaung and Kyautse villages in Buthdaung's Ponnagyun township to seek safety in Thinpone Tan village on Thursday night, said village head Than Win.

The group, which includes more than 90 children under the age of 12, joined more than 40 others from Phetwon Chaung village who also fled the hostilities, he said.

The displaced villagers have been placed in temporary tents, and village authorities have informed Ponnagyun township’s administrator that they need food and health care, he added.

Earlier this week, more than 200 people from Buthidaung's Kan Pyin village fled to Setaung village when they heard blasts from heavy weapons, but they returned home on Thursday, sources said.

Residents of Nwayone Taung, Uyin Thar, Chacharr Taung, Myoma Chaung, and Pyin Chaung villages cannot go to their farms because of the fighting, they said.

Aung Thaung Shwe, a lawmaker from the Arakan National Party (ANP) who represents the Buthidaung constituency, told RFA’s Myanmar Service that although fighting has subsided in these villages, government army soldiers recently came back to Uyin Thar village to check the area.

Earlier this week, Buthidaung authorities extended a night-to-dawn curfew in the area by another two months on account of the fighting.

The curfew has been in place since August 2017, when deadly attacks by a Muslim militant group on police outposts sparked a brutal military crackdown on Rohingya communities in northern Rakhine state.

Clashes between the AA and Myanmar forces escalated between Nov. 26 and Dec. 6 in remote hilly areas of Buthidaung near Myanmar’s border with Bangladesh, and spilled over into adjacent Rathedaung township.

AA spokesman Khine Thukha told RFA that the fighting began after the Myanmar Army intruded into an AA-controlled area of Buthidaung, where the Arakan troops maintain their border strongholds.

Four AA soldiers were killed during that week of hostilities, while officers and other ranks from the Myanmar Army also lost their lives, Myawady said, but gave no further details.

A statement issued on Dec. 7 by the Myanmar military said the AA engaged in the skirmishes to disrupt fencing work for the Kaladan Multi-Modal Transit Transport Project near Myanmar’s borders with India and Bangladesh, according to a report issued Dec. 11 by the Myanmar Times.

Many Rakhine residents oppose the project — a transportation corridor for shipping cargo from India's eastern ports to Sittwe seaport in Rakhine state and then on to northeast India via river and highway routes through Myanmar — saying they are being excluded from its potential benefits.

A step toward peace

The AA is one of several armed ethnic organizations that have not signed the government’s nationwide cease-fire agreement (NCA), which 10 other ethnic armies have inked.

The Myanmar military has refused to allow the AA, along with the Myanmar National Democratic Alliance Army (MNDAA) and the Ta’ang National Liberation Army (TNLA), to participate in formal peace negotiations until they agree to lay down their arms.

The AA, MNDAA, and TNLA, which together comprise a group of rebel armies known as the Northern Alliance, said Wednesday that they would cooperate with the government to advance the peace process, despite not having signed the NCA, the Myanmar Times reported.

The groups also called for an end to military activity in the areas they control as a trust-building measure to work towards peace, according to a statement they released after a meeting with government peace negotiators in Kunming, capital of southwestern China’s Yunnan province.