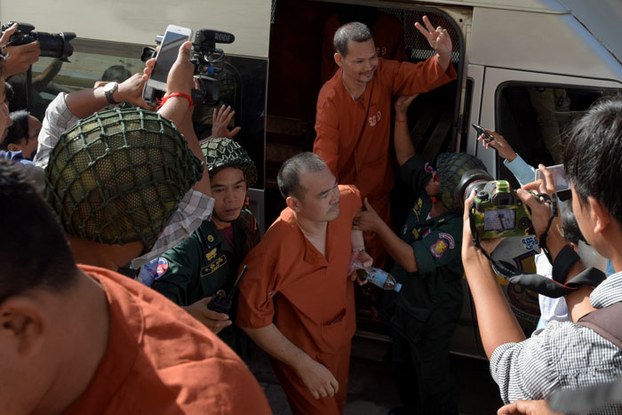 Meach Sovannara knows his chances of winning a reprieve in Cambodia’s court system that could spring him from that country’s notorious Prey Sar prison anytime soon are slim.

The Cambodian-American is serving a 20-year prison term for allegedly fomenting insurrection against a Cambodian government that has been dominated for more than three decades by Prime Minister Hun Sen.

While Meach Sovannara, the media director for the opposition Cambodia National Rescue Party, has dual U.S. and Cambodian citizenship and his family still lives in Long Beach, Calif., he has been locked away in Phnom Penh since July.

“Our hope is very slim,” he told RFA’s Khmer Service after a recent hearing on his case in Cambodia’s appellate court. “As of yesterday [Prime Minister] Hun Sen sent a political message purporting to have threatened the court just a day before the court heard our appeal.”

Meach Sovannara and 10 other opposition figures were sentenced to prison terms of up to 20 years on insurrection charges after a demonstration in July 2014 that resulted in violent clashes between protesters and security forces in Phnom Penh’s Freedom Park.

Although Meach Sovannara and the other opposition activists received stiff sentences, rights groups say that none of the defendants was identified as having committed an act of violence during the event.

Hun Sen announced on Aug. 22 that he would refuse to ask King Norodom Sihmoni to pardon any of the activists.

“As a former fighter, peace finder and national reconciliater, I will not sign a letter to set anyone free,” he said during a forum in Phnom Penh. “Anyone who is found guilty by the court must go to jail.”

Meach Sovannara says the remarks from the Cambodian strongman were, in effect, orders to the court.

“The court is surely a political tool,” he said.

Even though Meach Sovannara says his hopes of getting relief from the Phnom Penh are thin, he isn’t showing any signs of backing down.

“It should be time now that Mr. Hun Sen should know that enough is enough for him if he wants his children to do politics in the future,” he said.

Looking to the United States

While the Cambodian court system is an unfriendly place for opponents of Hun Sen, Meach Sovannara is hoping that a novel argument in U.S. courts may help free him from Prey Sar.

The first hearings in the suit are scheduled for Sept. 1 in federal district court in Los Angeles.

Foreign government officials are generally protected by sovereignty from being brought to trial. But the Foreign Sovereign Immunity Act recognizes exceptions that include violent acts again U.S. citizens abroad, and Meach Sovannara’s case may be the first in the U.S. to test those exceptions, his attorney Morton Sklar told RFA.

“Our underlying lawsuit is based on some special U.S. statutes that allow the U.S. courts to deal with tort [compensation for damages] claims against foreign governments that engage in acts of torture and violent attacks against U.S. citizens abroad,” Sklar said.

The suit contends that Cambodian Lieutenant General Hun Manet, Hun Sen’s son,  plays a “major role” in the Cambodian security apparatus that confronted protesters in Freedom Park in 2014 by virtue of his rank, family connections and position within the leadership’s “inner circle”.

The suit accuses Hun Manet of wrongfully imprisoning and torturing Meach Sovannara. The suit also names the Cambodian government as a defendant.

It alleges that Hun Manet’s family connections and leadership role within Cambodia’s security forces make him liable for the emotional and financial damage borne by Sovannara’s family.

Hun Manet heads the Cambodian military’s anti-terror unit, is deputy chairman joint staff of the Royal Cambodian Armed Forces and is the deputy commander of the Prime Minister's Bodyguard Unit – an elite unit that has often been at the center of complaints about rights abuses.

Hun Manet is widely viewed as his father’s successor to the country’s highest office.

“His involvement is pretty substantial all around,” Sklar said. “Hun Manet is his father’s right-hand person. He gets involved in a lot of stuff.”

It’s not the first time the Hun family has been sued in the U.S. In 2005, opposition leader Sam Rainsy and U.S. rights worker Ron Abney and others filed a similar suit alleging that Hun Sen was involved in 1997 grenade attack that killed at least 16 people and wounded at least 120. Abney was one of those wounded.

That suit was withdrawn in a political deal, but not before the U.S. courts entered a default judgment against Hun Sen, who had ignored the legal action. Sklar says Hun Manet learned from that case.

“Hun Manet learned that lesson,” Sklar said. “That’s why he has a lawyer. That’s why he’s offering a defense to the case.”

RFA could not reach either Hun Manet or defense ministry spokesperson, Chhum Socheat for comments, but Hun Manet’s attorney, John Purcell, told RFA that the accusations made in Meach Sovannara’s complaint are “groundless.”

Even before the opening arguments have been presented, the case has already taken a strange but violent twist.

As process server Paul Hayes was attempting to serve Hun Manet with a subpoena in the case during a visit the Cambodian general made to Long Beach in April, he was involved in an altercation with Hun Manet’s security detail.

Online videos appear to show Long Beach police spraying tear gas at Hun Manet’s bodyguards and protesters after Hayes was allegedly assaulted by the bodyguards while serving him with the subpoena in the Meach Sovannara lawsuit.

According to Sklar, the Long Beach Police Department has opened a criminal probe into the event.

The incident at Long Beach’s La Lune restaurant put Hayes in the hospital, and may have opened up a can of worms for Hun Manet.

One of the key claims in the early stages of the case concerns whether or not Hun Manet was actually served with the documents.

“The reason it didn’t get into his hands, is that the process server, Paul Hayes, was about to do that,” Sklar said. “He was about to deliver the documents when Hun Manet’s bodyguards grabbed him, pulled him off his feet and threw him to the ground head first with very serious injury.”

One of the questions the court will have to answer is whether the bodyguards illegally interfered with the service of the court papers.

“We have to get the full facts of what happened at La Lune restaurant related to the service and the attack on Paul Hayes in order for the court to answer the question as to whether service was adequate,” Sklar said.