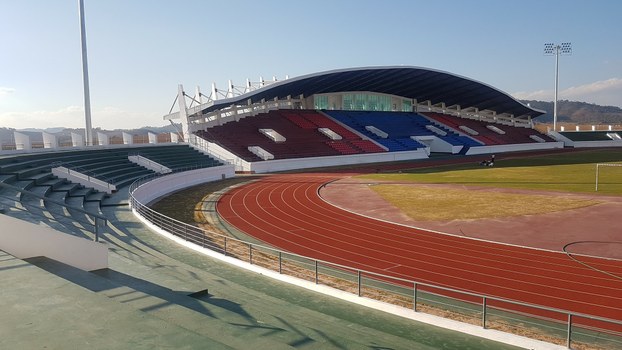 File photo of a stadium in Xieng Khouang Province ready for the 11th National Games.

The Lao government is postponing a major national sporting event that has been postponed twice before, and suspending flights to China and South Korea, in measures to prevent the novel coronavirus, which so far has spared the landlocked Southeast Asian country.

Laos’ Minister of Education and Sports, Sengdeuane Lachanthaboun, told local media Saturday that the government decided to indefinitely cancel the 2020 Lao National Games on the recommendation of the Ministry of Health. The games have been held roughly every three years since 1985.

The 11th games were slated to be held in Xieng Khouang province and had already been postponed twice before. The event was originally planned for November 2018, but was suspended on corruption concerns until 2019, but flooding in mid-2019 required another postponement to March 22, 2020.

“We sympathize with the athletes who have been training hard and preparing for the games, and also with the businesses that will be affected [by yet another postponement],” she added.

The suspension comes even as Xieng Khouang Governor Bounton Chanthaphone announced last week that the province was ready for the games.

“My athletes have been in training for so long, so they’re also very disappointed,” the coach added.

An athlete told RFA that he and his peers regret the decision.

“We’re not going,” the athlete said.

“We’ve been training in preparation for this event for more than a month.”

A member of the games’ organizing committee told RFA that the cancellation of the event was going to result in a waste of money.

“So much has already been allocated and spent. I’m sure some of it will be lost [to corruption],” the organizer said.

The suspension of the event is also hard on businesses. A hotel employee from Xieng Khouang’s Pek district told RFA that the cancellation will lead to hardship for the hotel.

“Well, we have to return the deposits for the rooms to the guests, but we already spent a lot of that money to improve our facilities and services. Now the whole thing is cancelled.”

A guesthouse receptionist in the same district voiced similar concerns.

“We were expecting to earn some money from the games [being held here], but now everything’s been cancelled and we’re suffering big losses,” the receptionist said.

Lao Airlines Sunday suspended its nine remaining routes to China and South Korea, the two countries with the largest outbreaks of COVID-19 in the world.

RFA reported in late January that the state enterprise had cancelled several direct routes to China, leaving a few open, but with Sunday’s flight suspensions, no direct route to China or South Korea remains open. The airline also laid off half of its work force of about 1,000.

“There are no flights, so at least half of the workers have been told to stay home without pay,” a Lao Airlines employee told RFA Monday.

Another employee at the Luangprabang airport told RFA that the suspension was because flights to China or South Korea were flying at only 20 or 30 percent capacity. The company is still operating routes to Bangkok and Chiang Mai in Thailand, and Ho Chi Minh City, Vietnam and Siem Reap, Cambodia.

“We’re told that we will not be paid until the situation returns to normal,” the airport worker said.

“If we keep working we’ll only get 30 percent of our full salary because the airline isn’t making any money right now.”

The owner of a hotel in Vang Vieng, Vientiane province told RFA that the suspension has decimated the hotel business there.

“Many hotels are affected by this suspension. Today only two rooms in my hotel are occupied.  Vang Vieng is unusually quiet. The hotel is usually packed with Korean guests.”

As of Tuesday afternoon, There were 80,151 confirmed cases of COVID-19 on the Chinese mainland, and 5,186 in South Korea.

Dr. Leeber Leebouapao, acting director of the Lao National Economic Research Institute estimated that the Lao government will lose revenue of between U.S. $250 million and $300 million due the coronavirus outbreak.