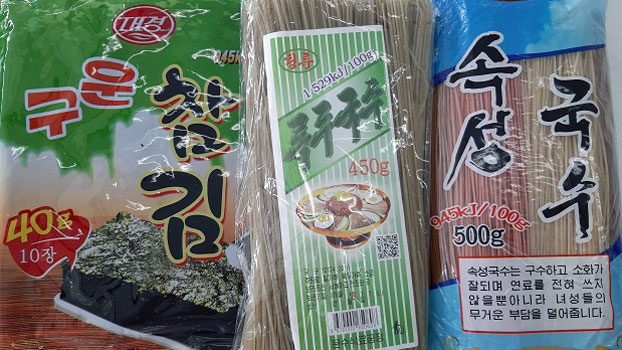 Packages of noodles manufactured by North Korea food companies are sold at a market in Hong Kong in an undated photo.
RFA

North Korea appears to be exporting processed food to its main trading partner China amid requests to international donor nations to provide aid for its own food shortages, raising suspicions that the isolated country is selling products made from donated inputs to earn much-needed foreign currency for its sanctions-hit regime, sources involved in trade say.

Flour and other grains, much of which are provided by international organizations, are the primary ingredients in North Korean processed food sold in markets in Hong Kong and mainland China, they said.

“It seems like flour imported from Russia and other foreign countries is not distributed to residents, but instead is reprocessed and exported abroad to earn foreign cash,” he said. “I thought it was strange to hear that the price of flour continued to rise in markets in North Korea even though Russia has provided a large amount of flour since early this year.”

Among the most popular processed wheat flour-based foods that North Korea exports are tricolor soksung (instant) noodles produced by the Guksabong Food Company and rokdu (green bean) noodles made by the Munsu Food Company, the source said. Both factories are located in North Korea's capital Pyongyang.

“They are gaining attention because you can eat them instantly anywhere if you pour water on them,” he said, adding that packages of the noodles are being snapped up by curious international tourists who visit Hong Kong and buy them at Korean markets and shops.

“If you look around the North Korean market in Hong Kong, there are all kinds of foods, [so] it’s questionable whether North Korea is actually suffering from food shortages,” the source said.

A Chinese trader in Dandong, the largest Chinese border city facing Sinuiju, North Korea, across the Yalu River, said that not only wheat flour from Russia, but also starch, cornmeal, and buckwheat powder — all of which North Korea must import — are main ingredients in food exports.

“Some experts on North Korea suspect that flour provided by China and Russia may have been reprocessed as an export product without supplying it to North Korean residents,” he said.

“There are also many stores around Dandong Customs that sell North Korean products,” said the source who declined to be named. “Among the North Korean food products sold to Chinese tourists, various kinds of noodles, drinks, and snacks are gaining popularity.”

Though most North Korean food products have marks indicating that they have been manufactured by food companies in Pyongyang, the main ingredients for noodles, snacks, candies, and jelly are flour, butter, and powdered sugar that must come from abroad, he said.

“It raises suspicions about how such food ingredients entered North Korea and through which channels,” the source said.

Because such a wide variety of processed foods from North Korea are sold in markets in China, it is “hard to believe they were made in a country where the population is malnourished due to food shortages,” he said.

“North Korea should not beg the international community for help with its food shortages, but should first supply the food that it exports abroad to its people,” he said.

Tons of wheat from Russia

To alleviate the food shortage, Russia has delivered thousands of tons of wheat to North Korea via the World Food Programme (WFP) since earlier this year.

The U.S. and the United Nations have imposed various rounds of sanctions on North Korea for its missile tests and nuclear program, though sanctions aimed at depriving the regime of resources generally have not restricted food imports.

North Korea’s diplomatic mission to the U.N. warned in an undated memo that the country was on the cusp of a food shortage of about 1.4 million tons this year, citing high temperatures, droughts, floods, and U.N. sanctions as the causes, Reuters reported in February.

But sources inside North Korea told RFA that the regime’s request for food aid from U.N. agencies was based on exaggerated claims of an ongoing food shortage, which occurs annually usually between May and June just prior to the barley and potato harvest, when stored food supplies are at their lowest.

During this period, food prices rise to their highest point, colloquially known as the barley hump, though sources said this year’s situation was not as severe as the regime claimed.

Meanwhile, WFP Executive Director David Beasley, who visited South Korea in May, said the agency has a distribution monitoring system for food aid to North Korea.

The WFP will ensure that food and other assistance meet the goals of donor countries, and that the agency has enough surveillance capacity to determine whether the food distribution is transparent, he said.