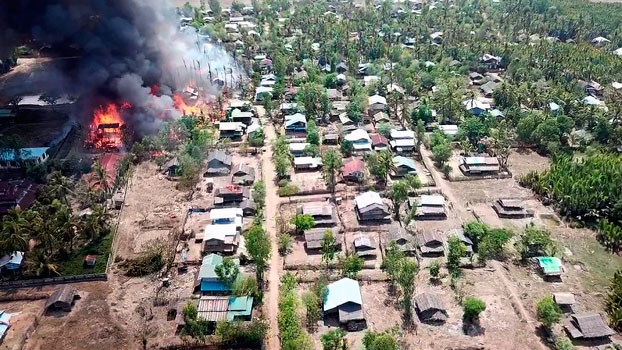 Myanmar’s army has shelled villages and burned homes in Rakhine state in recent months, killing and displacing civilians in “attacks that amount to war crimes” that should be tried by the International Criminal Court, Amnesty International said Wednesday.

The coronavirus pandemic brought no pause in the 19-month conflict between Myanmar forces and the rebel Arakan Army (AA) in the western states of Rakhine and Chin, where civilians have suffered indiscriminate air strikes, arbitrary detentions, and torture, the London-based human rights group said in a new report.

“While Myanmar authorities were urging people to stay at home to help stop COVID-19, in Rakhine and Chin states its military was burning down homes and killing civilians in indiscriminate attacks that amount to war crimes,” said Nicholas Bequelin, Amnesty’s Asia-Pacific regional director.

“The atrocities have not stopped — in fact, the Myanmar military’s cruelty is only getting more sophisticated,” Bequelin said.

“This relentless pattern of violations is clearly a matter for the ICC. The Security Council must act,” he said, referring to the International Criminal Court, an independent agency based in the Dutch city of The Hague which receives referrals from the Council.

In November 2019, the ICC authorized an investigation into alleged crimes against humanity perpetrated by Myanmar soldiers in Rakhine state against Rohingya Muslims in 2017 during a crackdown that left thousands dead and drove more than 740,000 others into neighboring Bangladesh.

In January, the International Court of Justice, a sister court that settles disputes between nations, ordered Myanmar to protect the Rohingya from genocidal acts and refrain from destroying evidence of alleged crimes —  a ruling in a case brought by the West African country of Gambia.

Amnesty’s report is based on remote interviews in May and June with more than two dozen ethnic Rakhines and Chins affected by military operations, including air strikes and shelling.

The report presents new satellite imagery of burned down villages and verifies video footage of rights violations carried out by the Myanmar military.

It also calls attention to the Myanmar military’s arbitrary detention of civilians in northern Rakhine state on perceived connections with the AA, and the use of torture and other forms of ill-treatment during interrogations. RFA has previously reported numerous accounts of such mistreatment.

A yearlong internet service cutoff in the conflict zone, imposed to thwart AA communications, has left residents uninformed about COVID-19, the report said.

The fighting in northern Rakhine and in Paletwa township of adjacent Chin state has killed 266 civilians and injured 576 others between December 2018 and June 29 of this year, according to figures compiled by RFA’s Myanmar Service. Rights groups say as many as 200,000 people have been displaced by the fighting.

Responding to Amnesty’s report, Myanmar military spokesman Brigadier General Zaw Min Tun said that the government army has acted transparently by issuing  announcements whenever civilians are killed during the fighting and whenever it detains civilians for questioning.

“When we conduct military operations, we need to use appropriate force and air strikes, but we have been trying to identify those who are civilians and those who are insurgents,” he told RFA.

Civilians tend to get caught up in the fighting when the AA moves into villages and uses them as human shields when firing on Myanmar soldiers or detonating explosive devices, he added.

“The government army is working as much as it can not to harm civilians,” Zaw Min Tun said. 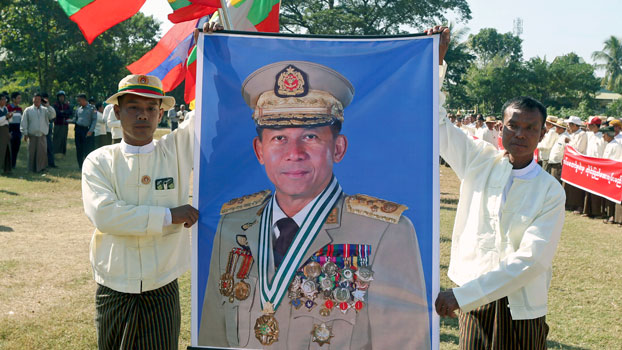 Amnesty said it was unable to document operations and abuses by the AA because of COVID-19 travel restrictions and limited access to conflict-affected areas and witnesses.

But the rights group added that reports suggest the AA has continued a pattern of abuses Amnesty previously documented — “endangering the lives of civilians during attacks, intimidation of local communities, and arbitrary deprivation of liberty.”

AA spokesman Khine Thukha said that his force’s soldiers had not committed any abuses against civilians amid the hostilities.

“If an AA member does something like this, then we are ready to conduct an inquiry and take action against him,” he said.

In response to the report, Pe Than, a lawmaker from Rakhine’s Myebon township, said there have been many instances of villages being burned by artillery fire and bombs from fighter jets.

“The military has stated its reasons for these actions, so I don’t want to say whether it is right or wrong,” he told RFA. “We Rakhines have been having these problems since the conflict began.”

The Amnesty report came in the wake of an announcement by Britain on Monday that it was imposing immediate sanctions on two high-raking Myanmar military officers deemed responsible for “notorious” human rights abuses in recent years, freezing their assets and banning them from traveling to the UK.

The list issued by the UK’s Office of Financial Sanctions Implementation (OFSI) now includes Senior General Min Aung Hlaing, commander-in-chief of Myanmar’s armed forces, and Senior Vice General Soe Win, deputy commander-in-chief of the military, for their involvement in rights violations against the Rohingya in Rakhine state in 2017 and 2019.

The OFSI said they were responsible for commanding troops who committed unlawful killings, burnings of Rohingya homes, torture, forced labor, and systematic rape and other forms of targeted sexual violence.

Soe Win was also cited for his involvement in financing the Myanmar military’s operations in Rakhine state during the time that the violations occurred and was deemed responsible for other rights violations in connection with the army’s business interests in Myanmar’s extractive industries.

Ten other Myanmar officers sanctioned by the UK government in 2018 remain on the list.

Brigadier General Zaw Min Tun, the army spokesman, said that Myanmar soldiers operate according to rules and regulations and that the move by the UK was politically motivated.

“When the military is performing its duties, such as working on securing and protecting the country, we follow the [military] rules of engagement,” he told RFA.

“The military has been addressing the Rakhine problem and human rights abuses with full accountability and responsibility,” he added.

Zaw Min Tun said the military is also conducting its own investigations into incidents in which soldiers have been accused of extrajudicial killings and rights abuses during the army-led crackdown on the Rohingya in 2017, and has been transparent with its findings.

“Despite that we are working on these cases, we were hit with sanctions,” he said. “We have nothing to say about it because it is what they [Western countries] usually do.”

“We welcome the sanctions against the Myanmar generals, but it is not enough,” said Tun Khin, president of the London-based Burmese Rohingya Organisation UK.

The British government still needs to pressure Myanmar to implement the recommendations of the U.N. fact-finding mission and to impose sanctions on companies that work with the Myanmar military, he added.

The 2018 U.N.-mandated investigation found that Myanmar had acted with “genocidal intent” against the Rohingya, though the government denied the accusation, saying that the military conducted a “clearance operation” in northern Rakhine in response to terrorist attacks by a Muslim militant group.

The mission urged the international community to cut its ties to Myanmar’s military, saying that revenues the armed forces earned from domestic and foreign business deals enhanced its ability to carry out gross violations of human rights with impunity.

“The whole world is paying attention to human rights violations in Myanmar, especially in Rakhine state, so there could be more sanctions against these two top generals,” he told RFA.

U.S. Secretary of State Mike Pompeo said in a statement on Monday that the move “will give the UK a powerful new economic tool to promote accountability for human rights abuse on a global scale.”

“The UK’s new powers will complement the efforts of the United States and Canada, further enhancing our ability to act together,” he said.