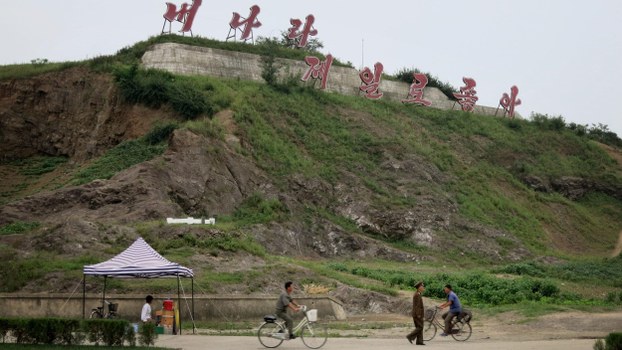 This file photo shows a roadside kiosk and passers-by below a sign saying "My country is the best" on the main road into Sinuiju, a North Korean city on the border with China

North Korean authorities are quarantining suspected COVID-19 patients in overpriced accommodations and then passing the bill on to them, demanding that patients pay for their quarantine in full before they are allowed to return to their homes, sources in the country told RFA.

As of Tuesday afternoon, Pyongyang has still not reported a single confirmed case of the disease, but outside experts believe it to be extremely unlikely that the virus is not spreading there. The country has taken extreme measures to limit its spread over the past month, including cancelling large events and locking down entire counties near the Chinese border.

Sources say that the people are grumbling, as they see the government’s quarantine terms as yet another government tactic to extract money from vulnerable people.

A resident of Dandong, China, just across the Yalu river border from Sinuiju, told RFA’s Korean Service Saturday, “I talk to my relatives living in Sinuiju and hear local news every day from them.”

“Sinuiju is currently quarantining suspected coronavirus patients in rural areas outside of the city, serving them three meals a day of just rice mixed with corn and soup,” said the source.

He added that one of his relatives was also under quarantine.

“We have to pay for the cost of room and board during the whole quarantine period, and they’re only giving them rice soup. They charge us five Chinese yuan (U.S. $0.72) a day and it must be paid to the authorities after they are released from isolation,” said the source.

North Korea’s local currency is the won (KPW), not to be confused with the South Korean won (KRW), but for all intents and purposes it is nearly worthless, so most commerce is conducted in U.S. dollars or Chinese yuan. The average monthly salary supplied by the communist government in won amounts to less than $5.00.

“Five yuan is enough to buy two kilograms (4.4 lbs) of rice in local markets. Residents are furious at the authorities because they aren’t helping us out. They are just trying to exploit us,” the source said.

According to the source, some of the people in quarantine have been there for nearly two months, and could be bankrupted since they expected to have to pay for their entire stay.

“The Sinuiju municipal government began quarantining people who had been to China and those who had been in contact with them or their family members starting on Jan. 20,” the source said.

“They say none of the people quarantined then were released yet. But they should start trickling out on the 11th of this month,” said the source.

“When the quarantine first began, they said the isolation would be 15 days, but soon after, they increased it to 30 days, thenagain to 40 days. If the person who was put under isolation on January 20th is released on March 11th, the isolation period will have been 50 days,” the source said.

Another source, also in Dandong described to RFA the conditions of squalor that the people in quarantine are subjected to.

“The quarantine location has no electricity, so they light candles and go to bed right after dinner. This routine is repeated day after day and it’s not much different from being in a correctional camp.”

Correctional camps are a common fixture in North Korea. Convicted criminals of even minor offenses are routinely given hard labor sentences to be served in these facilities.

The second source said that the coronavirus has rendered Sinuiju little more than a ghost town.

“My relatives say there aren’t many people on the streets these days. It’s eerily quiet, as there are not many people in the local market and in other places that are usually bustling with humanity,”

Despite Pyongyang’s apparent unwillingness to acknowledge the virus’ likely presence inside North Korea, state media Tuesday reported for the first time that the government’s efforts to prevent the spread of COVID-19 was putting the nation at risk for heavy economic losses.

According to South Korea-based experts, the report, published on the propaganda website Uriminzokkiri, reveals that North Korea is ill-equipped to handle a potential outbreak.

“So far, North Korea has been hiding facts out of fear that theregime might be shaken, but now it’s telling the truth,” Cho Han Bum of the Korea Institute of National Unification told RFA Tuesday.

“This is because it’s hard to get foreign aid if they hid the facts. In addition it could be that the government is releasing information gradually to ease the severity of the shock, because the public’s discontent and agitation might explode if they keep [the truth] hidden,” he added.

Cho Bong Hyun, the director of the IBK Economic Research Institute, told RFA that the revelation shows that the economy of North Korea has deteriorated to a point where the people are having a hard time making a living.

Late last month, North Korea first disclosed the existence of about 7,000 “people under medical” observation’ within its borders.