Taiwanese jetliners and cargo ships leave for China, kicking off a new era of direct air and shipping services across the Taiwan Strait, and formally ending a nearly six-decade ban on regular links between the rivals.
2008-12-15
Tweet 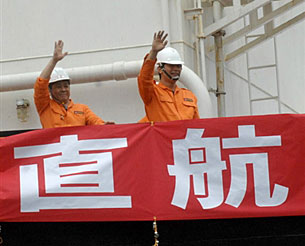 TAIPEI--Rivals Taiwan and mainland China kicked off direct air and sea transportation links for the first time in 60 years Monday with inaugural flights taking off on both sides of the Taiwan Straits--a move which leaders said signaled improved ties.

In Shenzhen, direct flights began with the take-off of mainland-based Shenzhen Airlines flight at 7.20 a.m. local time. It was swiftly followed by a Taiwan-based TransAsia Airways jetliner which departed Taipei for Shanghai.

Planes and cargo vessels had previously been required to transit through a third location before arriving in Taiwan from China, to alleviate political sensitivities and security concerns on the island, which has been governed separately from China since the end of the civil war between Kuomintang (KMT) nationalists and Mao Zedong's communists in 1949.

Ma, who took office in May on a pledge to improve cooperation with Beijing, told a ceremony amid shipping containers and tankers at Taiwan's busy Kaohsiung container port that the new links had both political and economic significance.

"One aspect is that the two sides are reconciling and not going back to the animosity and conflicts of the past," he told reporters.

"The other is the economy -- sea and air cargo links can greatly reduce time and expenses."

Under the agreement, China will open 63 ports to Taiwan ships while Taiwan will open 11. The two sides might increase the number of ports based on a "developing situation," according to the agreement. Direct postal services also began Monday.

Flights from Shanghai to Taipei now take just 80 minutes, cutting out more than an hour's flight time caused by the need previously to detour through Hong Kong. Cargo vessels previously detoured via Japan.

"Given the global financial crisis, cross-Straits direct flights started at exactly the right time," Zheng said at a ceremony in Shanghai. Direct links "will help the mainland and Taiwan jointly overcome the current difficulties," he added.

Signed in early November, the agreement provides for 60 charter cargo flights a month between two mainland terminals, Pudong in Shanghai and Guangzhou airports, and two Taiwan terminals, Taoyuan and Kaohsiung, split equally between carriers on both sides of the Strait.

There is also provision for 108 passenger charter flights a month, evenly divided, expanding passenger services from weekends and the four major traditional festivals.

Also on Monday, a China Shipping Group cargo freighter left Tianjin port for the northern Taiwan port of Keelung, closely followed by a second cargo ship which departed Taicang port in the eastern province of Jiangsu, bound for Taiwan.

"The distance and time from Taicang to a Taiwan port will be shortened by 200 nautical miles and 36 hours," Mei told the official Chinese news agency Xinhua. "It will reduce fuel and visa costs by U.S.$10,000 per trip."

Mail between Taiwan and China will now be sent directly, instead of being diverted through Hong Kong or Macau, cutting average delivery times by one or two days.

China-Taiwan trade was worth U.S.$90 billion in 2007, according to official Taiwanese data, while there are 750,000 Taiwanese investors in the mainland.

China's ruling Communist Party has claimed sovereignty over self-ruled Taiwan since it came to power on the mainland in 1949, threatening to bring the island under its rule by force should Taipei declare formal independence.

Tensions have flared intermittently in the past six decades, sparking fears of a potential regional security flashpoint.