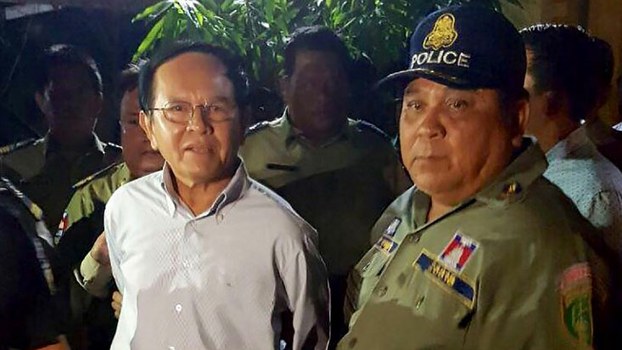 Cambodia’s Appeal Court on Tuesday refused bail to opposition Cambodia National Rescue Party (CNRP) President Kem Sokha, who has been held in pre-trial detention since September on charges of treason widely dismissed as politically motivated ahead of next month’s general election.

Judge Sous Sam upheld the Phnom Penh Municipal Court’s decision to deny Kem Sokha bail because an investigation into his case is ongoing, court spokesman Touch Tharith told reporters after the hour-long closed-door hearing, which the defendant was prevented from attending.

Meng Sopheary, one of Kem Sokha’s lawyers, called the ruling “unjust” because her client had satisfied all requirements for bail.

She said that the court had based its decision on “the so-called seriousness of the alleged crime of treason and that the case is within the investigation phase,” and claimed to have acted in the interest of “preventing such crime from reoccurring, preserving public order, preventing collusion with witnesses and ensuring the accused person appears during the trial proceedings.”

Meng Sopheary also suggested that the court had “violated the presumption of innocence principle” by denying Kem Sokha the right to appear at his bail appeal hearing, adding that her client’s rights have been “severely restricted [during his detention], as if he had already been convicted.”

She did not indicate whether the defense was considering another appeal.

Kem Sokha has been accused of conspiring to overthrow Cambodia’s government—charges that led the Supreme Court to dissolve his CNRP and bar it from taking part in the country’s July 29 general election. He has been denied bail four times since his arrest in September and faces up to 30 years in prison if convicted.

Several CNRP officials and activists have fled Cambodia since the party was banned and are currently living in self-imposed exile to avoid facing cases widely seen as politically motivated and tried in a court system beholden to Prime Minister Hun Sen’s ruling Cambodian People’s Party (CPP).

In addition to targeting the opposition, Cambodia’s government has also cracked down on critical voices within the country’s NGO community and independent media in recent months, in what is seen as part of a bid by Hun Sen to ensure that he remains in power after the vote.

According to a report by the Khmer Times, Hun Sen reiterated a pledge to rule Cambodia for two additional terms while speaking at a graduation ceremony in Phnom Penh on Tuesday, saying that “when the treasonous group emerged, I decided to extend my office to 10 more years” to prevent them from “destroying Cambodia.”

Hun Sen is Southeast Asia’s longest ruling strongman, having first come to power in 1985 after serving as Cambodia’s foreign minister.

The denial of Kem Sokha’s bail appeal came as Cambodia’s King Norodom Sihamoni officially endorsed the upcoming vote as “free and fair” and urged his citizens to exercise their rights by heading to the polls on July 29 to elect leaders who will develop the country.

In a letter dated May 18, but released to local media on Tuesday, the king said that Cambodia’s election process is in keeping with the principles of pluralism and called on voters to ignore “warnings and threats” from any individual or political party that might prevent them from casting their ballot next month.

The royal endorsement followed repeated threats by Cambodia’s government to prosecute anyone calling for a boycott of the election, after the CNRP told supporters to avoid the polls because it had been banned from participating.

Hun Sen has repeatedly urged Cambodians to show up for the ballot and, in early May, senior CPP official and National AIDS Authority chairman Ieng Mouly was quoted by government-aligned Fresh News media as saying that non-voters “love dictators,” adding that those whose fingers are not stained with voting ink at the end of the election will be easily identified as “guerillas” and “traitors.”

Late last month, former CNRP President Sam Rainsy wrote an open letter to King Sihamoni from self-imposed exile, urging him to refrain from endorsing the election and bending to the will of the CPP in calling on the public to vote, given the country’s political situation.

CNRP deputy president Eng Chhay Eang on Tuesday told RFA’s Khmer Service that the king’s endorsement is “routine” and is expected ahead of every election, but he suggested that his party’s supporters are now “better informed” and would choose to boycott the ballot because they “know right from wrong.”

“Without a doubt, the upcoming election will be neither free nor fair—it will not reflect the will of the people as they have been deprived of their right to choose the leaders and political party they want following the current regime’s persecution of the opposition,” he said.

“I believe the people will not be persuaded by any appeal for them to vote under such circumstances. Instead, they will stay home to exercise their rights.”

The monarchy has come under considerable pressure from the CPP during Hun Sen’s rule, and the prime minister once threatened to change the country’s form of government to a republic if the current king’s late father, King Norodom Sihanouk, refused to sign a supplemental treaty administering Cambodia’s border with Vietnam.