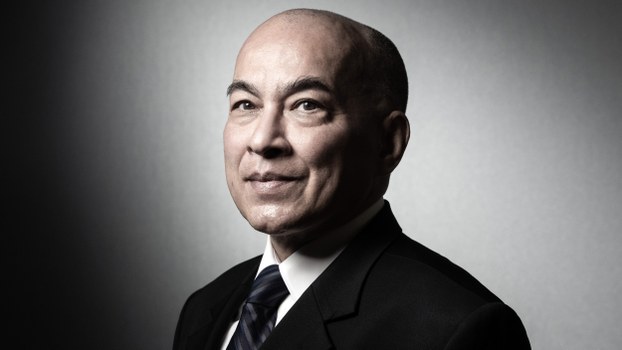 Cambodian King Norodom Sihamoni poses during a photo session in his workshop at the Institut de France in Paris, May 24, 2019.

A member of Cambodia’s opposition party marked the 67th birthday of King Norodom Sihamoni on Thursday by urging him to stop “ignoring” the country’s political stalemate, prompting the ruling party to dismiss the widely held view that it exerts pressure on him to harden its grip on power.

Prum Lyda, an activist with the banned opposition Cambodia National Rescue Party (CNRP) who lives in Thailand to avoid politically motivated harassment, did not mince words while calling out Sihamoni’s inaction, despite the threat of stiff penalties under Cambodia’s lèse-majesté law used to punish those who “insult” the monarch.

She said that Sihamoni should exercise his powers enshrined in the constitution, and follow in the footsteps of his late father King Norodom Sihanouk to resolve Cambodia’s political crisis and “end the suffering” of the people under Prime Minister Hun Sen’s leadership.

“With the late king, we felt confident [as a nation],” she told RFA’s Khmer Service, noting that when the country was embroiled in conflict, Sihanouk had “invited all parties to sit down and talk to find a solution and shake hands.”

“But King Sihamoni is a study in contrast. He has ignored [the political crisis]. It seems he does not pay much attention to the people and he is under pressure from the government.”

Sihanouk, who secured Cambodia’s independence from French colonial rule in 1953, died at the age of 89 in October 2012 after suffering a heart attack at a hospital in Beijing, prompting an outpouring of grief for the former ruler, who was beloved by his Cambodian subjects.

Sihamoni, on the other hand, has largely been abroad or operated in a rubber stamp capacity when controversial bills pushed through by the country’s one-party legislature are ready to be signed into law, often to the dismay of democracy and human rights watchdogs.

Last month, while the king was in Beijing for an annual medical checkup, the head of the Senate enacted a law authorizing a state of emergency to contain the spread of the coronavirus that a United Nations expert had said could be used to unnecessarily increase already heavy restrictions on freedoms of expression, association, and peaceful assembly.

Merely four months after a November 2017 Supreme Court ruling dissolved the CNRP for its alleged role in a plot to topple the government, Cambodia’s National Assembly unanimously passed the country’s lèse-majesté law, which forbids insulting the king and punishes those deemed guilty of such an offense with up to five years in prison and up to U.S. $2,500 in fines.

The move prompted rights groups to warn that the law could be used to silence critics of the government and came amid a larger crackdown on the political opposition, NGOs, and the independent media that paved the way for Hun Sen’s ruling Cambodian People’s Party (CPP) to win all 125 seats in parliament in the country’s July 2018 general election.

Another CNRP activist named Kong Mas, who is serving an 18-month jail sentence for posts he made on Facebook in early 2019 criticizing government policies, also urged Sihamoni on his birthday to help bring an end to Cambodia’s political impasse—albeit in a more diplomatic manner.

His wife, Kol Sat, said Kong Mas sent a letter to the king asking him to mediate between the two parties, as well as to issue a decree releasing the country’s political prisoners.

“His intention is simply to request that the king resolve the political crisis and to wish him well on his birthday,” she said.

In March, a Cambodian appeals court upheld the Oct. 18, 2019 sentencing of Kong Mas for “insulting the government” and “incitement to commit a crime” based on a Facebook post, which contained comments critical of Hun Sen’s government and predicted—correctly—that Cambodia would be the target of European Union trade sanctions.

Responding to calls for Sihamoni to intervene on Thursday, CPP spokesman Sok Ey San said Cambodia “has no political crisis” and that the government “can’t interfere in the rule of the king.”

“What evidence does the opposition party have to show that the CPP is pressuring the king?” he asked.

Sok Ey San said such “false allegations” are the reason members of the opposition have faced arrest and jail.

“They are insulting the constitution and the king’s reputation,” he said.

In September, a court in Cambodia charged acting president of the CNRP Sam Rainsy with “insulting the king,” a day after he gave an interview in which he called Sihamoni a “puppet” of Hun Sen, while last month, Sok Chenda, a former member of the CNRP’s Prey Veng Provincial Council was charged with inciting the public against the king, days after his arrest him over a “debt to a microfinance institution.”

Speaking to RFA on Thursday, social and political analyst Meas Nee said the CPP is “losing” by refusing to return to the negotiating table.

He said that within the context of the coronavirus outbreak and its economic impact, any attempt to prevent a national reconciliation will benefit the opposition while the public grows increasingly frustrated with the ruling party’s inability to improve living standards.

“Avoiding dealing with social crisis leads to revolt—there should be a national reconciliation and then the people will continue to support the government,” he said.

Meas Nee’s comments come a week after Hun Sen held a 50-minute meeting with former CNRP President Kem Sokha, now on trial for treason, after he sent condolences over the death of Hun Sen’s mother-in-law and attended her funeral in the capital Phnom Penh.

The meeting led to much speculation about whether the two leaders might resolve their differences stemming from Kem Sokha’s September 2017 arrest, but the CPP quickly set out to quash the rumors, calling the sit-down a matter of formality that does not herald a political reconciliation.

Analyst Seng Sary, however, told RFA on Thursday he expects there will be “a sudden turn” in Cambodia’s political landscape.

“Cambodian politics are in constant flux,” he said, noting that the country’s 2023 elections loom on the horizon.

I really wish he would step up and assert his powers to stop the misery.

Son of the Dragon

Because Sihamoni is nothing but a puppet. His real master is Hun Sen and Hun Sen is the one that is pulling ALL THE STRINGS. THE KING TITLE IS NOTHING BUT A SHAM!!!!!