Exile Cambodian Monk Calls on Cambodians Not to Vote in July 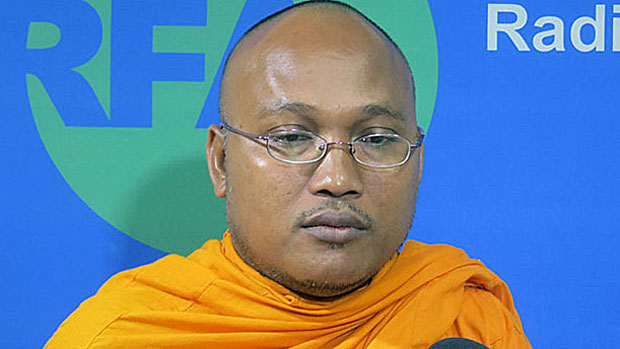 A Cambodian monk living in exile in the U.S. called on Tuesday on Cambodians not to vote in national elections next month, saying that government moves against its political opposition have left voters in the Southeast Asian country with no real choice.

Speaking on an RFA Khmer Service call-in show, Buth Buntenh—who fled Cambodia ahead of a government lawsuit at the end of last year—urged voters on July 29 to openly display a finger “unstained” by the ink typically used to show that a vote has been cast.

“If on July 29, as citizens and compatriots of our country, you see that there is no good choice, please fulfill your obligation by keeping your finger clean,” he said. “The indelible ink that will be used during this election is evil ink.”

Cambodia’s upcoming ballot is widely expected to be neither free nor fair following the dissolution of the country’s main opposition Cambodia National Rescue Party (CNRP) in November over its alleged involvement in a plot to topple the government.

The CNRP received more than 3 million votes—accounting for nearly half of the country’s registered voters—in Cambodia’s 2013 general election, and enjoyed similar success in last year’s commune ballot, making it the only legitimate challenger to Prime Minister Hun Sen’s ruling Cambodian People’s Party (CPP) ahead of July.

In addition to targeting the opposition, Cambodia’s government has also cracked down on critical voices within the country’s NGO community and independent media in recent months, in what is widely seen as part of a bid by Hun Sen to ensure that he remains in power after the vote.

In a statement Tuesday, Southeast Asian lawmakers condemned threats made recently by Hun Sen and other CPP figures to pressure Cambodians to vote and to punish those who stay away from the polls.

“The government’s actions are clearly driven by concerns over the legitimacy of the vote,” Charles Santiago, a member of the Malaysian Parliament and chairperson of the ASEAN Parliamentarians for Human Rights (APHR) rights group, said.

“But coercing voters to pay lip service to democratic principles will not improve the polls’ legitimacy,” Santiago said.

“The inappropriate pressure on voters, in fact, violates their fundamental freedoms, particularly given the government’s denial of a real choice at the ballot box.”

Speaking to RFA on Tuesday, Phay Siphan—spokesperson for Cambodia’s Office of the Council of Ministers—declined to respond in detail, saying that the APHR statement reflected only the rights group’s own view.

“It has no legal force to make Cambodia follow the path they want,” he said.