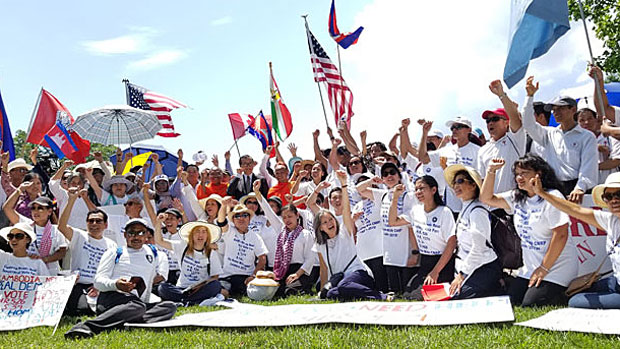 The government of Cambodia this week placed six EU parliamentarians on a list to be refused visas to enter the country, citing the group’s statements of support for the banned Cambodia National Rescue Party (CNRP) and its exiled leader, who has vowed to return to Cambodia to topple long-ruling Prime Minister Hun Sen.

The order by Cambodia’s Foreign Ministry, dated July 15 and sent to Cambodian embassies around the world, includes photos and the names of those to be barred entry, all of whom have pledged to accompany acting CNRP president Sam Rainsy on his promised return from four years in exile sometime later this year.

Phil Bennion, a representative to the EU from the U.K. and one of those placed on the list, said “It does not cast a good light upon the government of Hun Sen in Cambodia, that it seeks to exclude elected European Parliamentarians for speaking up on behalf of the banned opposition.”

“It is more likely to reinforce the views in democratic countries across the world that Cambodia has retreated from multi-party democracy and respect for human rights,” Bennion said, writing in an email to RFA’s Khmer Service.

“[This] will strengthen calls for action to be taken against Cambodia and its government for this unfortunate approach,” Bennion said.

Others named on the list to be refused entry to Cambodia include Ana Gomes, a former EU representative from Portugal, Ilhan Kyuchyuk from Bulgaria, Johannes Cornelis van Baalen of the Netherlands, former EU MP from Sweden Abir Al Sahlani, and Javier Nart from Spain.

Speaking on condition of anonymity, a Cambodian diplomat stationed in the U.K. confirmed his embassy had received the order to deny any visa request made by Bennion, saying “We’ve received the ministry’s instruction. It is true.”

The moves left Prime Minister Hun Sen’s Cambodian People’s Party (CPP) with no viable challenger in a general election in July 2018 that saw the ruling party win all 125 parliamentary seats up for voting.

Meanwhile, the EU announced in February it would launch a six-month monitoring period to determine whether Cambodian exports should continue to enjoy tax-free entry into the European market under the Everything But Arms (EBA) scheme, prompted by the Supreme Court’s ban of the CNRP.

On Wednesday, hundreds of Cambodians based overseas joined Sam Rainsy and other exiled CNRP officials outside the U.S. Capitol Building to call for swift passage in the Senate of a bill levying sanctions against Cambodian officials deemed responsible for undermining democracy in the Southeast Asian nation.

The Cambodia Democracy Act of 2019, passed in the House of Representatives on Tuesday, if enacted into law would block the assets of government, military, or security officials responsible for the crackdown in recent years on political opposition groups, NGOs, and independent media.

Speaking to RFA on Wednesday, acting CNRP president Sam Rainsy voiced strong support for the bill, which he said will strike hard against Hun Sen and his supporters.

Other Cambodians will also be affected, though, Sam Rainsy said, so to avoid sanctions being imposed, Hun Sen must be removed from power.

“I want democracy to survive,” he said.

European Union, do you know to respond in kind ?