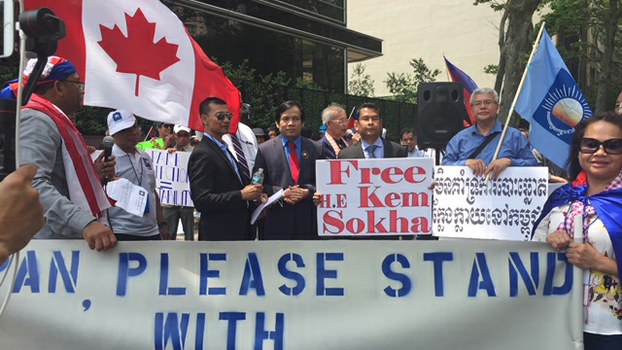 CNRP supporters hold a rally in front of the Japanese Consulate in New York City, June 1, 2018.

Japan’s government on Friday defended its plan to support Cambodia’s general election with only one month to go before the ballot, despite criticism that it cannot be either free or fair without the participation of the main opposition party.

Hironori Suzuki, a counselor with the Embassy of Japan in Phnom Penh, told RFA’s Khmer Service that “there is no change in our position to believe that it is of utmost importance to have the national election scheduled for this July properly reflect the will of the Cambodian people.”

Cambodia’s Supreme Court dissolved the main opposition Cambodia National Rescue Party (CNRP) in November over allegations it was involved in a plot to topple the government, stripping the party’s officials of their posts and banning many from politics for five years.

The dissolution of the CNRP and the arrest of its president Kem Sokha, as well as a crackdown on NGOs and the independent media, are measures widely seen as part of a bid by Prime Minister Hun Sen to ensure that his ruling Cambodian People’s Party (CPP) stays in power in Cambodia following the July 29 vote. Hun Sen marks 33 years in office this year.

Suzuki told RFA that Japan “has monitored the development of the situation closely with strong interest, and has given necessary encouragement for the stakeholders to take constructive action with the aim of paving the best way for their own future and development through the implementation of the election that will reflect the will of Cambodian people.”

According to Suzuki, Japan intends to provide “technical assistance to improve election management,” and has already “contributed to the enhancement of stability and transparency for the election process.”

“We believe that this technical assistance benefits all Cambodian people who support democracy through elections and cast their will on their ballots,” he said.

“We provide electoral reform assistance in order to support the consolidation of democracy in Cambodia for the medium- and long-term through promoting people's trust and confidence in electoral procedures.”

Amid Hun Sen’s crackdown on the political opposition, both the U.S. and EU have withdrawn donor support for Cambodia’s elections, citing government actions seen as limiting democracy in the country.

But Japan, among the largest funders of Cambodia’s 2018 elections, has maintained that it has no intention of pulling its electoral aid ahead of the July vote.

Japan has already provided Cambodia’s National Election Committee (NEC)—the country’s top electoral body—with computers to assist with its ballots and has faced criticism of its continued support from the NGO community, such as New York-based Human Rights Watch.

Japan’s stance also has prompted repeated protests from members of the Cambodian diaspora around the globe, who have urged Tokyo to end its support for the election until Hun Sen “reinstates democracy” in Cambodia and allows the CNRP to register for the ballot.

In addition to electoral support, Japan also provides Cambodia with a variety of aid for projects including infrastructure improvement, humanitarian assistance, and business development.

Attempts to reach CPP spokesperson Sok Eysan for comment went unanswered on Friday, but the ruling party official has been quoted by local media as saying he believes Japan “respects Cambodia’s sovereignty and will not interfere in its internal affairs.”

CNRP deputy president Mu Sochua—who along with several other opposition officials fled Cambodia when her party was dissolved, fearing reprisals—told RFA she hopes that Japan will “choose democracy over dictatorship.”

“We will continue our fight to bring democracy back to Cambodia,” she said, adding that the CNRP would continue to protest until election day.

“We are going to rally everywhere there are CNRP branches. We also continue to call on Cambodians everywhere to join the CNRP in protesting and condemning the unfair election. We cannot accept any election without CNRP participation.”

The party has called on Cambodians to boycott July’s ballot in protest over the CNRP’s dissolution.

Also on Friday, Cambodia’s Supreme Court rejected an appeal to overturn the Phnom Penh Municipal Court’s August 2017 conviction of political commentator Kim Sok on charges of defamation and incitement to cause social disorder.

Kim Sok was jailed on Feb. 17, 2017 after Hun Sen accused him of implying that the CPP had orchestrated the July 2016 murder of popular political pundit Kem Ley, though Kim Sok said that he had only been repeating what many Cambodians believe.

On Friday, head human rights investigator Am Sam Ath of the rights group LICADHO told RFA that Cambodia’s courts should focus on finding justice for Kem Ley, rather than taking action against people critical of the way his case had been handled.

“So far there have been no new developments regarding Kem Ley’s murder—the process has been very slow, and Kem Ley’s family still has not received justice,” Am Sam Ath said.

“However, when it comes to critics of Kem Ley murder case, people have been arrested and placed in jail extremely quickly,” he added.

“The handling of Kim Sok’s case has had a negative impact on freedom of expression. Other people are now worried and too intimidated to speak freely.”

Kem Ley was shot dead in broad daylight on July 10, 2016, when he stopped in a convenience store beside a gas station in Phnom Penh. Though authorities charged a former soldier with the murder, many in Cambodia don’t believe the government’s story that Kem Ley was killed by the man over a debt.

Just days before he was gunned down, Kem Ley had discussed on an RFA Khmer Service call-in show a report by London-based Global Witness detailing the extent of the wealth of the family of Hun Sen.