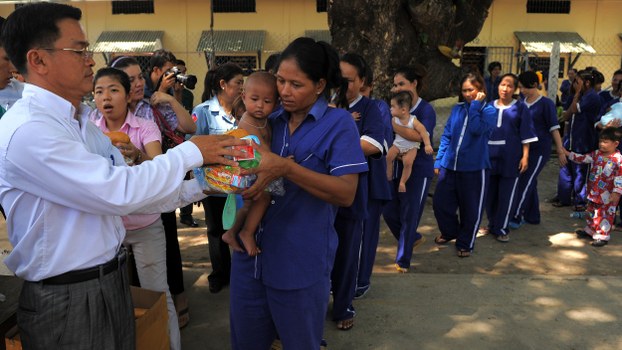 A representative of local rights group LICADHO offers food to a female inmate and her baby at Prey Sar prison in Phnom Penh, in a file photo.

The health of a jailed former official with the banned opposition Cambodia National Rescue Party (CNRP) in Cambodia’s Banteay Meanchey province has rapidly deteriorated since his transfer to Phnom Penh’s notorious Prey Sar Prison to await an appeal of his conviction, his wife said Tuesday.

Chao Veasna, the 55-year-old former council deputy chief for Banteay Meanchey’s Poipet commune, was sentenced to five years in prison in 2018 for “incitement to violence” after a protest four years ago in which transportation workers—angered over import taxes—hurled rocks at the Poipet Customs Department building and were dispersed when military police fired warning shots and beat participants.

He was elected to his position during Cambodia’s 2017 commune elections while in prison awaiting his trial, but was removed after the country’s Supreme Court dissolved the CNRP in November of the same year for the party’s alleged role in a plot to topple the government.

Chao Veasna—who suffers from fevers and other chronic conditions including skin disease, liver problems and stomach ulcers—maintains that he was only observing the protest in an official capacity and did not incite workers, while NGOs have called his conviction “politically motivated.”

On Tuesday, Chao Veasna’s wife Vong Kimhong told RFA’s Khmer Service that his health has seriously deteriorated since he was transferred from Banteay Meanchey Prison to Prey Sar in October 2018.

She said she spoke to him recently by phone, because she cannot afford to travel to see him, and that he had expressed concern over his condition being affected by being held in an overcrowded cell with other inmates who smoked incessantly.

Vong Kimhong also said that prison officials have repeatedly denied her requests that her husband be permitted to receive treatment in a medical facility outside of Prey Sar or be allowed to return to Banteay Meachey Prison.

“The prison doesn’t have enough medication—all they have are painkillers,” she said.

“I want him to be transferred to Banteay Meanchey [Prison], which is close to the family.”

Chao Veasna’s lawyer, Chuong Choungy, told RFA that he filed a formal request for Prey Sar Prison to transfer him back to Banteay Meanchey province last month, but said he had yet to receive a response.

“He wants to be back in Banteay Meanchey and said the court can try him in absentia,” the lawyer said, adding that he plans to follow up with the request.

Sum Chan Kea, Banteay Meanchey provincial coordinator for local rights group Adhoc, said Chao Veasna is innocent of the charges he was convicted under and called his detention “unjust.”

“Meanwhile, he is being detained in an overcrowded cell,” he said.

Prison officials were not immediately available for comment about the case.

Last month, the Supreme Court denied a bail request from Chao Veasna, upholding a previous verdict by the Appeal Court.

Meanwhile, several NGOs expressed concern on Tuesday that a wealthy club owner and businessman is receiving special medical treatment outside of prison because of his ties to powerful people in the government.

Kith Theang, the owner of the Rock Entertainment Center in Phnom Penh and the brother of business tycoon Kith Meng—who has close ties to Prime Minister Hun Sen—was arrested in March after police found drugs during a raid on a party held by a group of people who had rented out his club.

He was being detained while awaiting trial on drug-related charges, but was transferred to a hospital in April for treatment of an undisclosed illness.

Nuth Savna, Cambodia’s general director of prisons, told RFA that Kith Theang is “sick” and cannot be returned to prison because his condition has yet to improve.

“We cannot decide, only the doctors can,” he said, adding that he hopes the club owner will be sent back soon because he has had to deploy several guards to keep watch over him at the hospital where he is staying.

Seung Sengkarona, spokesman for local rights group Adhoc, told RFA that it is common for wealthy inmates and suspects to be allowed to dodge jail time under the pretext of health issues, while others are denied access to medication and treatment outside of the prison system.

He said he suspects that such special treatment is linked to corruption, and warned that this kind of abuse of power will lead to more crime.

“There is no equal punishment [between the rich and the poor],” he said, adding that because of this inequity, wealthier people with good connections “are not afraid to commit crimes.”