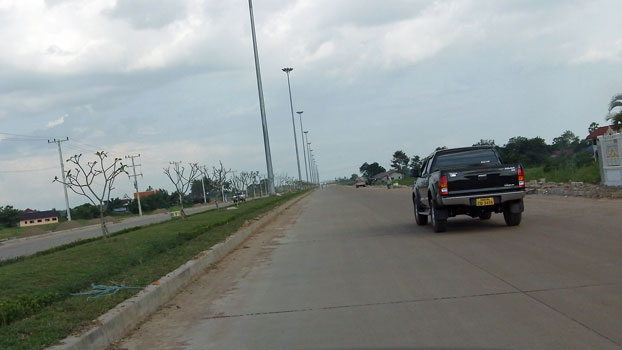 A Lao motorist drives a truck along a stretch of roadway slated to become part of a toll expressway project in Laos' capital Vientiane in an undated photo.
RFA

Police authorities in the Lao capital Vientiane are promising to discipline seven officers who demanded money to “settle” the case of a young man stopped for traffic violations, police and other sources in the country said this week.

The rare pledge by police followed a televised apology by the young man’s mother, who had publicly scolded the police force for corruption in an Oct. 25 Facebook posting, embarrassing the authorities, sources said.

“The police stopped my son on his way home, inspected him and his motorbike, took away his bike key, and then took him behind their police booth,” Vorabout Boualm said in her live Facebook posting. “My son called me and I went there. The police demanded 200,000 kip [U.S. $22], and I gave it to them.”

“To the police who took my money: Go to hell!” she said. “The police are supposed to protect people, not to rob them.”

“They are now considering [a proper] punishment,” the officer said, speaking on condition of anonymity.

“Yes, our officers did break some rules,” he said. “First, they resolved the dispute on the spot and did not report this to their office. Second, they didn’t seek advice from their superiors. So they’ll certainly be punished.”

The young man, who had been stopped by police at about 10:10 on the night of October 24, was found to have committed four violations, the officer said.

“He wasn’t wearing a helmet and he had an incorrect registration for his bike, which was missing rearview mirrors and had a modified exhaust pipe. So we gave him a ticket and he called his mother, who arrived minutes later,” he said.

The officers who stopped the young man shouldn’t have asked for payment of the fine on the spot, a security guard in Tanmixay village in Vientiane’s Xaythany district told RFA.

“They should have just issued a ticket,” he said.

“The police patrols usually begin at midnight, not at 10:00 p.m., since there is usually still a lot of traffic at that time,” added a resident of Nongphaya village near the young man’s home.

Vorabout Boualom was later forced by police to apologize for her online scolding of the police who had stopped her son, saying in a televised appearance in front of a police station on Nov. 6 that she had “overreacted” in making her criticism.

“Because I was tired and angry, I didn’t ask my son or the officers why he had been stopped. I just put the money into their hands and took my motorbike home,” she said. “I apologize for overreacting and promise never to repeat this kind of behavior again.”

At the same time, Police Lieutenant Bounthom Keomanivong—commander of the Capital Vientiane Mobile Police Force—admitted that the seven officers under investigation had broken protocols in their handling of the Oct. 24 traffic stop.

“This has caused a lot of misunderstanding, and resulted in many complaints from the public,” Bounthom said, reading from a prepared statement and promising punishment for the officers involved.

“As their commander, I am offering a sincere public apology,” he said.

Reached by RFA for comment, Vorabout Boualom declined to speak, saying she now wanted to put the matter behind and not get into further trouble.

Corruption has been a widespread and long-term problem in Laos because of the developing country’s weak laws and lack of enforcement by authorities.

Transparency International, a Berlin-based global anticorruption coalition, ranked Laos 130 among 180 countries on its Corruption Perceptions Index for 2019 and gave the country a score of 29 on a scale in which 0 is highly corrupt and 100 is very clean.

Corruption exists at every level of government in Laos and is difficult to uproot because it has become part of the country’s culture, sources familiar with corruption in Laos told RFA in earlier reports.

In late 2016, under the new government of Prime Minister Thongloun Sisoulith, more than 1,300 low-ranking police officers nationwide were fired for corruption including taking bribes from drug traffickers and motorists.