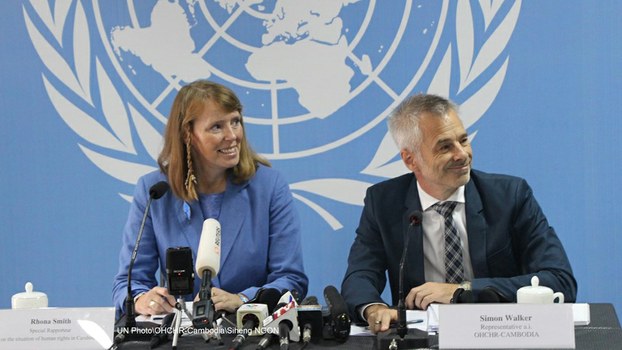 UN Special Rapporteur on Human Rights in Cambodia Rhona Smith (L) speaks to reporters at a press conference in Phnom Penh, May 9, 2019.

The United Nations’ expert on human rights in Cambodia on Wednesday urged the country’s government to protect civil liberties and ensure the right to a fair trial on the eve of a mass court appearance for more than 100 members of the banned opposition party.

The Phnom Penh Municipal Court has summoned at least 113 individuals connected to the opposition Cambodia National Rescue Party (CNRP) to stand trial on Thursday, most of whom face charges of conspiracy and incitement to sow chaos in society—crimes punishable by up to 10 years in prison. Another group of CNRP members are due to appear in court next month.

Rhona Smith, the U.N. Special Rapporteur on the situation of human rights in Cambodia, expressed serious concerns over the imminent mass trial in a statement on Wednesday. She said such actions appear to be “politically motivated, lacking clear legal grounds and constitute a serious violation of the due process rights, firmly established by international human rights law.”

Smith also suggested such mass trials were part of a strategy to intimidate and discredit those who speak out against the government.

“This is not an isolated episode,” she said. “Civic and democratic space in Cambodia has continued to shrink and there remains little evidence of political rapprochement and reconciliation.”

The rapid pace of the proceedings against the many CNRP members stands in stark contrast to those facing the party’s president, Kem Sokha, which the government has delayed under the pretext of the coronavirus pandemic.

Kem Sokha was arrested in September 2017 over an alleged plot to overthrow the government with U.S. help. Cambodia’s Supreme Court banned his party in November that year for its supposed role in the scheme.

Prime Minister Hun Sen has privately mused that Kem Sokha’s treason trial, which was cut short in March this year, may not restart until 2024. Observers say Hun Sen may be pushing ahead with Thursday’s mass trial as part of a bid to undercut Kem Sokha’s support base and entice him into leading one of the country’s various lesser-known opposition parties that stand little chance of winning at the polls.

The move to dissolve the CNRP marked the beginning of a wider crackdown by Hun Sen on the political opposition, NGOs, and the independent media that paved the way for his ruling Cambodian People’s Party (CPP) to win all 125 seats in the country’s July 2018 general election. 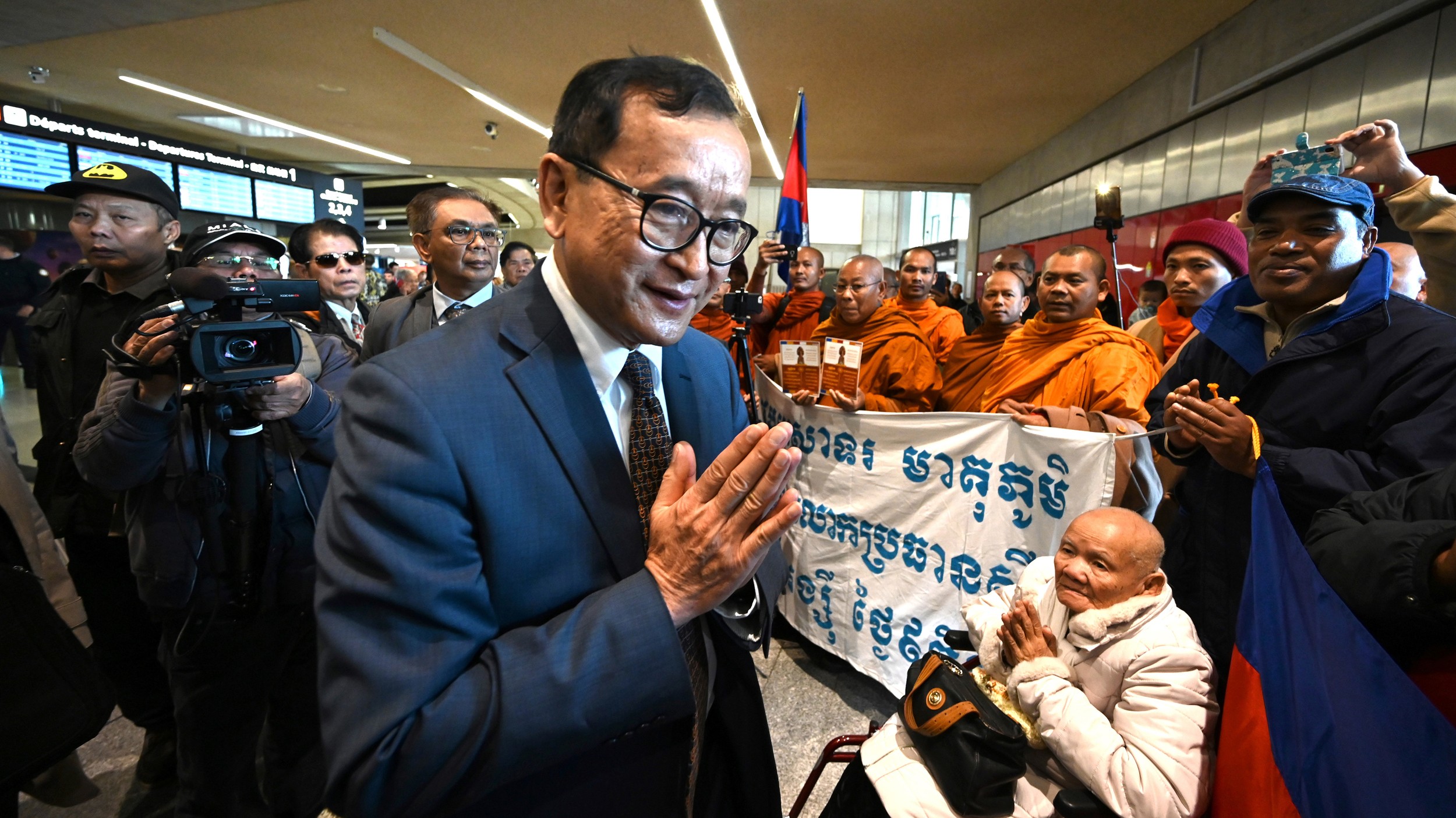 ‘Fair trial for all’

Since June 2019, more than 150 people associated with CNRP have been arrested on various charges, Wednesday’s statement noted. Of them, 31 have been arrested since January 2020, with 30 remaining in detention. An additional 42 individuals have been summoned for questioning and subsequently released under judicial supervision this year, according to Smith.

“Every person must have the right to adequate time and facilities to prepare his or her case,” Smith said.

“As some of the individuals summoned are currently residing outside Cambodia, there are reasonable grounds to believe that the defendants do not have access to relevant materials, including exculpatory material to prepare their defense.”

Among those summoned are members of the CNRP’s top brass, including acting president Sam Rainsy, his wife, deputy CNRP president and Cambodia’s former Minister of Women Affairs Mu Sochua, party parliamentarian Eng Chhai Eang and others. Most have said they would return to Cambodia willingly if the government would lift travel bans against them.

Sam Rainsy had tried to return on Nov. 9, 2019 to lead nonviolent protests against Hun Sen, urging Cambodian migrant workers abroad and members of the military to join him. However, his plan to enter Cambodia from Thailand was thwarted when he was refused permission to board a Thai Airways plane in Paris.

Smith urged Cambodia’s government to end its crackdown on constitutional rights and its courts to adhere to international standards for justice.

“I call on the authorities to open up civic space, protect and promote fundamental freedoms, including the rights to assembly and of expression, and to ensure the right to a fair trial for all, as guaranteed by international human rights norms and standards and Cambodian laws,” she said.

Smith’s statement follows one by the U.S. Embassy in Cambodia, which said that Washington is “closely following a growing number of court cases” targeting NGOs, journalists, and CNRP supporters.

“Freedoms of association and expression, and tolerance of dissenting views, are vital in a genuine democracy,” the embassy said in a post to Facebook.

“We urge authorities to protect these freedoms, as enshrined in Cambodia's constitution, and to take meaningful steps to reopen civic and political space in the lead up to 2022 commune elections and 2023 national elections.”

Also, on Wednesday, Thach Setha, a former senator for the opposition Sam Rainsy Party (SRP), told RFA’s Khmer Service that he does not fear arrest or imprisonment after only recently learning that he was among those summoned to the Phnom Penh Municipal Court to face charges of conspiracy and incitement.

Thach Setha, who is also president of the Khmer Kampuchea Krom Association, said he was surprised after colleagues informed him of his inclusion on the summons—which incorrectly listed his name, date of birth, and address—but vowed to appear to understand why he was charged.

“I have nothing to fear about possible arrest and being sent to jail [after tomorrow’s hearing],” he said.

“I just see it as an injustice that I cannot accept. I say, ‘let the people make the judgement.’ Therefore, I will not flee, for I have committed no treason or conspired with anyone.”

Thach Setha said he had not even been involved in any political activities since the dissolution of the CNRP because he was suffering from an illness.

He added that he hopes to see a political reconciliation in Cambodia, adding that he believes if Sam Rainsy is allowed to return to end the ongoing stalemate, “it would bring pride and harmony to our nation.”

“This is what I have really wanted from my political career,” he said.

“I don’t want to see our country divided as it has seriously damaged our honor, given our past history [of civil war]. I don’t want to see that history repeat itself. Once we reach reconciliation, we can restore our economy and the face of our nation.”