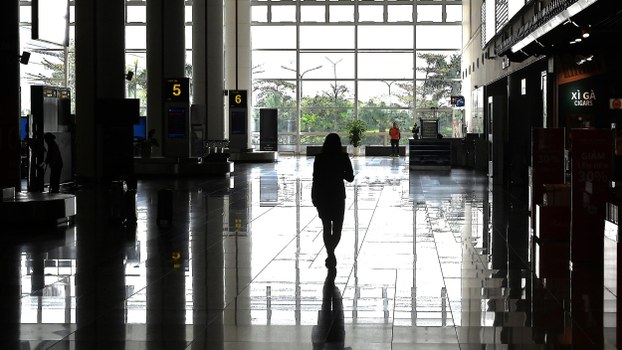 A woman walks in the nearly empty arrival hall of Noi Bai International Airport in Hanoi on February 27, 2020, as the number of air travellers has plummeted amid fears over the spread of the COVID-19 coronavirus.

Vietnam’s textile and electronics industries may soon run out of raw materials because the country has temporarily cut off trade with China due to the novel coronavirus epidemic, industry figures and an economist warned Thursday.

The textile and electronics sectors rely heavily on supplies from China, so sources in Vietnam told RFA’s Vietnamese Service that manufacturers will either need to suspend operations or find creative sourcing solutions to the supply-chain disruptions.

“About 60 to 70 percent of imported materials for [the leather] industry come from China,” Diep Thanh Kiet, the deputy chairman of the Vietnam Leather Footwear and Handbag Association, told RFA Tuesday.

“The COVID-19 outbreak in China has caused many to postpone production, because there’s a disruption in the sourcing of the supplies we need. If this isn’t solved by March, many operations will have to close at least parts of their business,” he said.

Economist Ngo Tri Long of Vietnam’s Finance Ministry told RFA, “Most of the materials imported by Vietnam are from China.”

“Because COVID-19 is spreading there, trade and exchange between Vietnam and China has been limited. So not enough materials have been supplied to satisfy demand. So in the coming weeks, several enterprises will have to temporarily cease production,” Ngo added.

Expert Dinh Trong Thinh told RFA that the time might be right for Vietnam to diversify the countries it imports from and exports to.

Vietnam is party to two major free trade agreements, the CPTPP with countries on both sides of the Pacific Ocean, and the EVFTA with the European Union.

Dinh said that Vietnam needs to leverage these two agreements to find raw materials from countries other than China. He suggested that leather sourced in Thailand or India could easily replace what the industry sources from China.

He also said that materials that Vietnam might try to import from Japan, South Korea or the EU might be more expensive, but would likely be of higher quality.

He said that this might spur an increase in the quality of Vietnamese exports, which would only result in a better performance abroad. Should this occur, Dinh said, Vietnam would be able to export products globally and be less dependent on the Chinese market.

A 68-year-old South Korean who had recently traveled in Vietnam tested positive for coronavirus Sunday in South Korea.

The infected person left Vietnam on Feb. 16, one week before testing positive.

Le Thi Thu Hang, the spokesperson for Vietnam’s Ministry of Foreign Affairs said Wednesday that Vietnam’s Embassy in Seoul asked the Korea Centers for Disease Control and Prevention (KCDC) to provide it with more information about this patient.

Vietnam has temporarily barred entry to all travelers from affected areas of Japan, South Korea, Italy, and Iran, including Vietnamese citizens.

Passengers who enter Vietnam from those four countries must file health questionnaires and be quarantined 14 days.

As of Thursday afternoon, Vietnam currently has no active confirmed cases of coronavirus. It previously had 16 confirmed cases, but all 16 made complete recoveries.