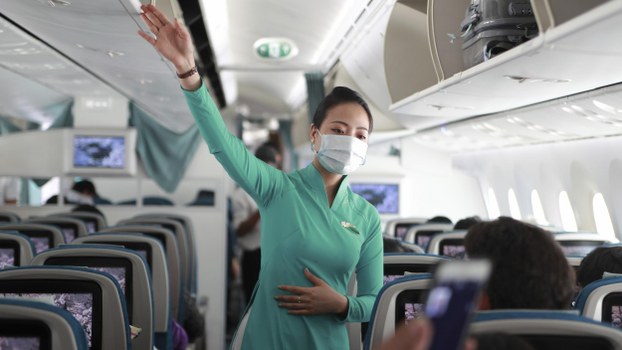 A flight attendant gives instructions to passengers on a plane in Ho Chi Minh City, Vietnam on Monday, March 16, 2020.

Vietnam and Cambodia both saw their totals increase slightly, while Laos, which has still not reported a single case, announced that schools would be closed closed until April 21.

The health ministry in Vietnam updated its total to 75 COVID-19 cases, including seven new cases among people who returned home from countries in Europe. The total as of Tuesday had been 66 cases.

The 67th case is a Vietnamese citizen who attended a 16,000-man Muslim rally at the Sri Petaling mosque near Kuala Lumpur Malaysia. The majority of Malaysia’s 790 cases are connected with the four-day event that included about 1,500 Muslims visiting from abroad.

That citizen returned to Vietnam March 4, and was the second instance of a Vietnamese testing postive after attending the event in Malaysia, both having returned on the same flight from Kuala Lumpur.

Among 999 Vietnamese people returning from Europe, 325 came from the UK, France or Germany where the COVID-19 cases are increasing.

The administration on the same day reported around 6,000 Vietnamese passengers returned home on 78 flights from other countries in Southeast Asia.

The transport ministry recommended that Vietnamese nationals overseas consider returning to Vietnam as immigration rules are tightening worldwide and countries might unilaterally halt or change flights with little notice.

The ministry announced that the government would provide all necessary means to repatriate Vietnamese nationals who wish to return home.

On Tuesday, Vietnam Airlines (VNA) announced it was temporarily suspending flights between Vietnam and France until further notice, while flights to the U.K. and Germany remain unchanged.

In the Southeast Asia region, VNA suspended flights between Vietnam and Malaysia starting on Wednesday through the rest of the month because the Malaysian government has sealed its border.

Also Wednesday, the Vietnamese government temporarily suspended visa issuance for all foreign nationals for 30 days in accordance with Prime Minister Nguyen Xuan Phuc’s Tuesday directive, with exceptions for those on diplomatic or official purposes.

On the same day, the Health Ministry sent an urgent dispatch requesting all passengers on 11 flights linked with confirmed COVID-19 cases to contact the Centers of Disease Control nationwide for further healthcare guidance.

A mosque in Ho Chi Minh City closed down Tuesday after six people there came into close contact with one of the two confirmed cases who had been at the Muslim rally in Malaysia.

VN Express reported that the Jamiul Islamic mosque in Phu Nhuan district was ordered closed by the city’s department of health, and the six worshippers are now in quarantine at a medical camp in Can Gio district.

The spread of COVID-19 has been linked to religious gatherings in several instances, including being the chief reason for the rapid spread of the virus in South Korea. A church rector in Washington, DC’s affluent Georgetown neighborhood marked the U.S. capital’s first confirmed case earlier this month.

Vietnam’s Government Committee For Religious Affairs sent a dispatch to the Vietnam Protestant Church and the Catholic Bishops’ Conference of Vietnam suggesting they temporarily suspend all mass religious activities and refrain from sending or receiving any personnel from countries with a COVID-19 presence.

Head of the Government Committee for Religious Affairs Vu Chien Thang requested that authorities and the representative boards of the Muslim communities in Vietnam report any members who were present at the event in Malaysia and instruct them to self-quarantine, make health declarations and visit healthcare establishments for testing.

Meanwhile in Laos, the Ministry of Education and Sports Tuesday ordered all primary schools to close down, effective Thursday.

A ministry official told RFA’s Lao Service Wednesday that the decision was made because the numbers of infected and dead continue to increase worldwide.

“Our schools, especially the public schools, don’t have enough temperature scanners to detect the disease,” said the official.

According to the ministry’s order, the schools will be closed until April 21, and teachers will assign homework for students to study at home.

“I’m happy because I don’t want my children to get infected,” a parent in Savannakhet province told RFA Wednesday.

“We must take preventive action. When there is an outbreak like this, children should be protected first,” the parent said.

“Because in our country, children are not wearing masks at schools. Teachers only tell students to step up sanitation like washing hands and that’s it.”

The U.S.-based Centers for Disease Control and Prevention (CDC) do not recommend that healthy people wear masks or respirators in public to protect themselves from COVID-19.  But officials in China, Hong Kong and Taiwan say that masks worn by the sick can prevent some of the droplets expelled by a cough or sneeze from going airborne.

The Vientiane parent added that many schools in the area don’t have temperature scanners and simply send students to health centers if they report feeling unwell.

The decision to close primary schools came after Lao Prime Minister Thongloun Sisoulith issued an order to close all kindergartens and pre-schools nationwide on Monday. Parents then began clamoring to authorities to close all schools.

The Phnom Penh Police referred the case of Long Phary, from Prey Veng province, to the city’s court, which transferred him to Prey Sar prison after initial questioning over his role in a phone conversation discussing COVID-19’s presence in Cambodia.

Long Phary’s daughter, Phal Choeun, told RFA’s Khmer Service that the true reason for her father’s arrest was because he continues to support opposition leaders abroad.

She said the court recently issued an arrest warrant while the government was cracking down on opposition officials in 2019. She considers the arrest to be unacceptable because she says her father committed no crime.

“I have asked the court why they arrested my father. I was told the arrest was made because he talked about the COVID-19,” said Phal Choeun.

“I don’t understand why such a tiny issue led to his arrest. When we look at other countries, they are freely and openly talking about COVID-19, so why can’t we do that here in Cambodia?” she asked.

Long Phary was arrested at a coffee shop in O'Russey market on Wednesday morning. He had eluded arrest while staying in Phnom Penh for several months after the court issued an unspecified arrest warrant.

RFA was unable to reach Phnom Penh Police Chief Sar Thet and Phnom Penh Municipal Court spokesman Um Rin for their comments on the case as of Wednesday.

Am Sam Ath, deputy director at the Cambodian League for the Promotion and Defense of Human Rights (LICADHO), told RFA that the police were unjustified in arresting people who did not commit crimes. He said authorities must provide a clear reason for any arrest and inform accused relatives.

“Everyone is worried [about COVID-19], so the expression of their opinions may result in the use of uncientific terms,” said Am Sam Ath.

“I think that if authorities use the law so strictly as to punish any false information, it could infringe on people’s rights to their own opinion,” he added.

Am Sam Ath said that opposition activists are known to have been tortured, beaten or otherwise injured by unknown persons and arbitrarily arrested.

He added that Khut Chuk , another CNRP activist, was arrested March 10 for allegedly posting a message on Facebook, and he was accused of providing false information that could cause an upheaval in society.

Am Sam Ath said the allegations undermine people's right to freedom of expression as stated in the constitution.

Hun Manith confirmed to RFA’s Khmer Service Wednesday that he had participated in the conversation, but refused to name the senior official, only revealing that the official is a director-general at the Ministry of Foreign Affairs.

Cambodia’s Foreign Minister Prak Sokhon told RFA that now the ministry is at the highest risk of contracting the COVID-19, because officials are always traveling abroad, attending meetings and seminars, adding that those who remain in Cambodia also meet many foreign guests.

Prak Sokhon confirmed an official at Ministry of Foreign Affairs was infected with the COVID-19 but also declined to name the official.

He said the patient is now undergoing medical treatment and is in good condition.

The health ministry said in a statement released Wednesday that so far 37 people in Cambodia have tested positive for COVID-19.

Nothing cuts me more deeply as I read those lines! The fissures are deep and wide between our cultures and races.
While growing up as a child neither my grandparents or parents regard the VNmese indigenous people as foreigners - for they know better!
It's differently today. Our pains and experiences have made us ethnocentricity.
All of us have suffered during and after the war. I know you read/heard the horrific plights of our 'people'.
No one is happy with the communists then or now.
Yes, it would seem that the 'vnmese' people have got on with their lives, but that is only on the surface. Don't forget, like 'you', 'we' too want to rise up and seek justice and freedom.
So, let's focus on this greatest threat; that is the VNmese Communist Party.
I believe, together we can prevail. Don't let this hatred divides us. We are stronger together.

Another deathly virus that is similar to COVID-19 is the Genocidal virus which infected only Dega people in the Central Highlands in Vietnam. The Genocidal virus causes Dega people to lose ancestral lands, language death, culture destroyed, identity extinguished and environmental habitat destroyed. The genocidal started to infect Dega people since North Communist Vietnam took over the Central Highlands in 1975 and slowly destroyed Dega people society from the leaking of genocidal policies of the communist Vietnam regime. Dega people have nothing left, they used to be a group of people with honest, humble, respectful, hardworking, living harmoniously with nature, obey adult and loving children, but today, their society is full of robberies, drunkard, prostitution.
Another aspect of the genocidal virus turns Dega people become the slave on their ancestral land. Their life will be long drudgery and humiliation.