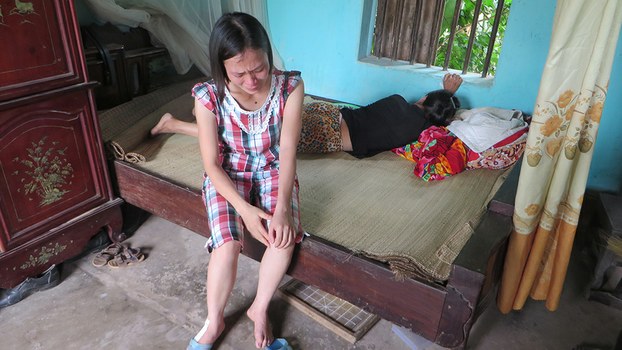 The sister-in-law (L) and mother (R) of Hoang Van Hai in an undated photo.

Vietnam’s government should have done more to bring home two Vietnamese sailors executed last week after being held for nearly eight months by Islamic militants in the Philippines, family and neighbors of the two men said Monday.

Hai and Thong were beheaded by their captors, allegedly on July 5, and their remains were discovered by Philippine troops on the island of Basilan early the next day, Vietnam’s Vice Foreign Minister Vu Hong Nam said last week in a statement condemning the killing.

Nam said that the Foreign Ministry would support the victim’s families in preparing for their funerals and continue to request that Philippine authorities work to ensure the safety of Vietnamese citizens.

On Monday, Hai’s father Hoang Van Tu told RFA’s Vietnamese Service that the MV Royal cargo company and the Vietnamese government had not done enough to save his son from Abu Sayyaf, which is known to behead its hostages when ransom demands are not met.

“[The militants] said we had to pay about 100 million pesos (U.S. $1.97 million) as a ransom,” Tu said in an interview at his home in Thanh Hoa province’s Tinh Gia district.

Later, he said, the wife of the cargo ship’s chief officer—who was also held by Abu Sayyaf—instructed families of the crewmen to sign a memorandum “with no words” to secure their release.

“We wondered how we could sign something with no words, but then the director of MV Royal said that only he knew what the content of the memorandum would say, and if we wanted to save our children then we would have to do it,” Tu said.

“He told us to trust in him. There were six of us families and we each signed 10 blank documents. We didn’t expect anything like this to happen!”

Hoang Van Hai’s uncle Trung told RFA that Abu Sayyaf executed the two crew members because the group had waited too long for ransom money from Vietnam, which he called a state that “doesn’t work for the benefit of its people.”

“The citizens of countries with democratic political systems that are open and respectful of human dignity wouldn’t be denigrated and neglected by foreigners,” he said.

A neighbor of Hoang Trung Thong’s family in Quang Binh province said that both the government and MV Royal had failed Thong and Hai, and neglected to keep them informed of the hostage situation.

“From the state to the company, both handled the issue in the most ridiculous way,” he said.

“It had been seven to eight months, so if they couldn’t do anything for them, they should have let the families or the media know, so people could donate money to save them,” he added.

“The villagers here love each other very much, and every evening they have gone to the victims’ families to offer their condolences.”

The lives of the crewmen were extremely difficult, the neighbor said, and they did not deserve to be mistreated by their company and government.

Most of the crew earn 5 million to 8 million dong (U.S. $220 to $352) per month, only getting paid after completing journeys across the ocean lasting several months, while their wives and children live in poverty, he said.

He called on Vietnam’s authorities to rescue the remaining Vietnamese crewmen being held by Abu Sayyaf, saying that to do so is “the duty of a good government.”

Abu Sayyaf, which formed in the 1990s with financial assistance from Al-Qaeda, split into a loose collection of factions in the mid-2000s and is now believed to number around 400 members. Several of the factions have declared allegiance to the Islamic State since 2014, according to the BBC.

The Islamic militant group has become known for kidnapping over the past 15 years and has earned millions of dollars in ransom, which it has used to acquire modern weaponry, boats and communications equipment.

According to the Philippine military, Abu Sayyaf is still holding a total of 22 hostages, including 16 foreigners.

In February, the group beheaded 70-year-old German national Jurgen Kantner after its demand for 30 million pesos (U.S. $590,000) was not paid.

Sorry and thnx MisaoFan, I didn’t mean to catch your attention that way. I know about Viet Tan, I was just trying to spook ole pathetic communist infiltrator/sympathizer Phan Fangs (This will be her name from here on!) for she makes as if they really post detrimental threats to the communist goons.
Yes, I’m very cautious with various demonstrations back home. These are great stuff! Our people are fed up and rightly so. These are the 1st step in getting our people together and the communist attention; however; the real ‘results’ are few.
I think, the people voices need to be heard by the ‘Party’ members. These are the ‘possible changing agents’. So far, IMHO, we got the local official attention.
Hence, our people need to escalate these rather quickly before they learn to extinguish/thwart the people's voices and wills.

@Hate Communists Well if you don't know what Viet Tan is it's a political party in-exile founded in 1981 that is pro-democracy and call for peaceful reforms and end of communist rule. Many members of such group gets arrested throughout 2000s up to 2013.

BTW did you notice that there is an increase of pro-reform protests in Vietnam compared to before? I think it would serve as a good prelude to the potential future revolution.

Whoa, Mary Fangs, I think you have mastered English language well, so where does RFA insert its comments in this article?
Have you been sniffing incense from Ho’s altar again? The truth is, you and your communists friends need to come up for air so to clear your heads for clearer thinking - of which will help all of us!
What’s a Viet Tan…is it a boogey man that frightens ‘lil ole communist infiltrator?
BTW, the 1st rule of journalism is not to vest ‘personal felling’ into news. I think RFA has that covered very well! Way-ta-go RFA…lol!

Absurd attack against Vietnam by this RFA again: last time I look, several Americans and other nationalities have been beheaded by ISIS and its affiliates despite attempts to rescue, to pay ransoms...Families of victims understandingly speak out and to use their emotional words against related companies, governments are only suitable to bottom feeders such as these RFA journalists/Viet Tan fanatics!

It happened with the similar beheading of Japanese guys by ISIS before but the difference between that country and here is that Vietnam rarely report bad events such as this, which is a obvious sign of a bad government.