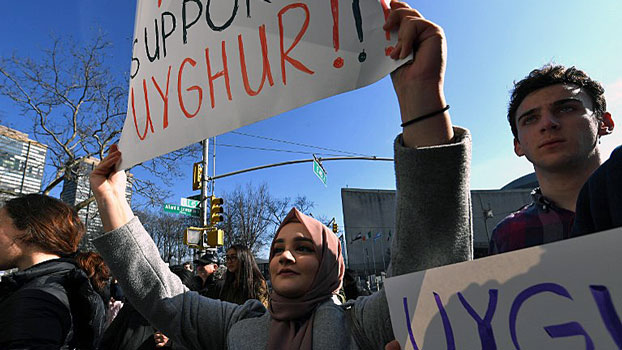 Four U.S. Congressmen have led a group of international lawmakers in calling on the head of the United Nations to appoint an expert to investigate rights abuses against ethnic Uyghurs in northwest China’s Xinjiang Uyghur Autonomous Region (XUAR).

In a letter to U.N. General Secretary António Guterres dated Nov. 16, Representatives Ted Yoho and Tom Malinowski and Senators Rick Scott and Jeff Merkley called for the appointment of a Special Envoy, Special Rapporteur, or other mechanism to investigate the “growing human rights crisis” in the region, as well as to hold a special session of the Human Rights Council.

Parliamentarians from Australia, Canada, the European Union, Italy, and Switzerland—who along with the Congressmen are members of the Inter-Parliamentary Alliance on China (IPAC)—also signed the letter calling for a probe into China’s policies in the XUAR. Authorities in the region are believed to have held up to 1.8 million Uyghurs and other Muslim minorities in a vast network of internment camps since early 2017.

In addition to the campaign of mass incarceration, the letter cited testimonies of victims of ethnic persecution in the XUAR that detailed “widespread government-led efforts to suppress religious identity and expression,” as well as evidence that Uyghur women have been sterilized under threat of punishment, which could include being sent to the camps.

The letter also referred to reports that the Chinese government uses diplomats, officials, and other proxies in IPAC nations to spy on and track down Uyghurs residing abroad, refuses to renew travel documents for Uyghur citizens overseas, putting them at risk of deportation, and seeks to silence Uyghurs in other countries by harassing and detaining their family members back home.

“The abuse of the Uyghur population at the hands of the Chinese Communist Party has been ignored for far too long,” said Yoho, who is the ranking member of the House Asia Subcommittee.

“In order to properly investigate accusations of cultural genocide, forced labor, rape and forced sterilizations the international community must work together in holding the perpetrators responsible. I’m encouraged to see broad bipartisanship meet international support in coming together to demand accountability and transparency in China’s administration of the Xinjiang region.”

Merkley, a member of the Senate Foreign Relations Committee and commissioner of the bipartisan and bicameral Congressional-Executive Commission on China (CECC), called the situation in the XUAR “nothing short of genocide.”

“Partners of freedom and humanity around the world have a grave responsibility to come together and use every lever at our disposal to demand justice in Xinjiang—including a thorough United Nations investigation, unfettered access to Xinjiang for human rights monitors, and decisive action from the UN Human Rights Council,” he said.

Scott expressed frustration that the U.N. Human Rights Council has done little to address violations in the region.

“I am proud to join my colleagues to call on the UN to take immediate and forceful action to expose and condemn Communist China’s despicable human rights abuses,” he said.

Nury Turkel, a commissioner on the U.S. Commission on International Religious Freedom (USCIRF), an independent U.S. federal government body, welcomed the bipartisan congressional effort and “growing international call” for the U.N. to appoint an independent expert and to hold a special Human Rights Council session.

“The U.N. has failed to fulfill its obligation under its mandate to protect the human rights of Uyghurs and other Turkic Muslims in the face of China’s genocidal policies,” he said.

“We call on the U.N. Secretary General to speak publicly against atrocities against the Uyghurs. His silence sends the wrong message to perpetrators of human rights abuses around the world.”

Monday’s letter came as more than 20 British and EU Members of Parliament, who are also IPAC members, issued a missive to U.K. Foreign Secretary Dominic Raab, urging him to examine whether the U.K. should level sanctions against the Xinjiang Production and Construction Corp (XPCC)—a key paramilitary group in the XUAR—the Xinjiang Public Security Bureau, and several Chinese officials deemed complicit in rights abuses in the region.

All of the entities and individuals mentioned in the letter were sanctioned by the U.S. in July this year, including Chen, in a move marking the first time Washington had sanctioned a member of China’s powerful Politburo.

Loughton, who is also chair of the All-Party Parliamentary Group for Tibet, noted that Chen had formerly served as the Party Secretary of the Tibet Autonomous Region (TAR), where he enacted similar policies used to repress Tibetans between 2011 and 2016.

“We ask that the government acts immediately to assess the conduct of the organisations and individuals named in this letter against the violations listed in the Global Human Rights Sanctions Regulations 2020,” the letter reads.

“If found in breach, the government sanctions should be issued comprehensively and without delay.”

Speaking to RFA’s Uyghur Service on Tuesday, Dolkun Isa, president of the Munich-based World Uyghur Congress exile group, welcomed the two calls for action and intervention in the situation in the XUAR.

“For nearly four years, China has been committing what amounts to genocide right in front of the eyes of international community, but the U.N. has done little to address the world’s largest arbitrary incarceration of an ethnic and religious group since the Holocaust,” he said.

“Further delay in addressing the most urgent global issue of the day … by the U.N. will only bring shame to this international body and the elimination of the Uyghur people. Therefore, the U.N. should immediately appoint a Special Rapporteur to investigate China’s crimes against Uyghurs and bring the perpetrators to justice.”

Isa also expressed gratitude to the U.K. and EU parliamentarians for calling on Raab to enact measures to hold rights abusers in the XUAR accountable.

“The U.K. and EU should follow the lead of the U.S. and sanction the Chinese officials to prevent the genocide of the Uyghur people,” he said.

The two letters follow one last week by IPAC members calling on the International Criminal Court (ICC) to launch an investigation into whether rights abuses in the XUAR amount to genocide and other crimes against humanity, based on a complaint and evidence submitted by two Uyghur exile groups four months ago.

The Japan Parliamentary Alliance on China is now discussing a bill to create a Japanese version of the Magnitsky Act, to allow for sanctions, according to Nikkei Asia. The daily reported that 11 Japanese firms were on a list of multinational corporations using factories that rely on forced labor in the XUAR, released in March by the Australian Global Policy Institute.

The Chinese Communist Party is waging a war against Uighur Muslims, Tibetan Buddhists, Christian house churches, Falun Gong, etc. It is a war against faith & religion but it's a war the CCP cannot win. What is shameful is that the UN has done nothing to stop China's war against religion & minority groups.