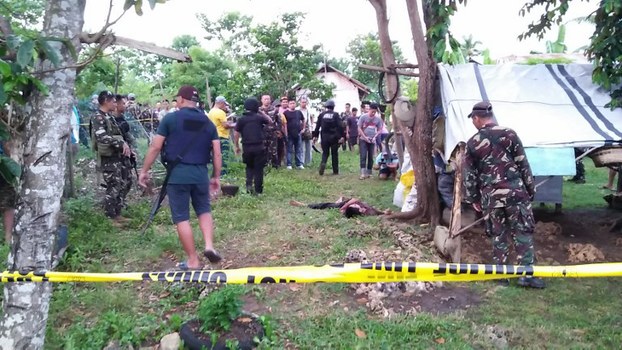 Members of the Armed Forces of the Philippines following an engagement with Abu Sayyaf in Calape town, Bohol province, May 15, 2017.

A Vietnamese sailor from a crew held for five months by Islamic militants in the Philippines was killed during a firefight with Filipino troops over the weekend, Vietnam’s Foreign Ministry said Wednesday, a week after captors beheaded two other hostages when their ransom demands were not met.

Vietnam’s state media quoted Ministry of Foreign Affairs spokesperson Le Thi Thu Hang confirming that the body of Tran Viet Van was discovered among “several” corpses following a Saturday raid on the Abu Sayyaf group by the Armed Forces of the Philippines in the island province of Sulu.

“I am deeply saddened to affirm that the Vietnamese citizen Tran Viet Van has been killed after an attack by the Philippines military forces targeting Abu Sayyaf,” Hang said.

“We would like to send our deepest condolences to the family of Tran Viet Van and hope his family will soon overcome these painful moments of great loss to stabilize their lives.”

According to Hang, the Vietnamese embassy in the Philippines is now coordinating with local authorities to complete forensic and legal procedures, and support funeral preparations for the victim.

It was not immediately clear whether Van was killed by members of the Muslim insurgent group or by military forces during the chaos of the raid.

Van was one of six sailors aboard a vessel named the Giang Hai who were taken hostage by Abu Sayyaf in February while shipping cement from Indonesia to the Philippines for International Shipping Co. One of the crew was later shot dead by the militants, but four remain in captivity.

News of Van’s death came a week after Filipino authorities discovered the decapitated bodies of Hoang Van Hai and Hoang Trung Thong on the island of Basilan. The two are believed to have been beheaded on July 5.

Vietnamese state media has provided limited coverage of the incidents, aside from foreign ministry statements condemning the terrorists.

On Wednesday, Hai’s brother refused to comment when contacted by RFA’s Vietnamese Service about Van’s death, saying he had been “warned not to speak to the press,” without providing further details.

Earlier this week, Hoang Van Hai’s uncle Trung told RFA that Abu Sayyaf executed the two crew members because the group had waited too long for ransom money from Vietnam, which he called a state that “doesn’t work for the benefit of its people.”

Vietnam’s Ministry of Foreign Affairs on July 11 urged the government of the Philippines to quickly address the kidnapping of Vietnamese citizens in the country and ensure their safety.

Abu Sayyaf, which formed in the 1990s with financial assistance from Al-Qaeda, split into a loose collection of factions in the mid-2000s and is now believed to number around 400 members. Several of the factions have declared allegiance to the Islamic State since 2014, according to the BBC.

The Islamic militant group has become known for kidnapping over the past 15 years and has earned millions of dollars in ransom, which it has used to acquire modern weaponry, boats and communications equipment.

According to the Filipino military, Abu Sayyaf is still holding a total of 21 hostages, including 15 foreigners.

In February, the group beheaded 70-year-old German national Jurgen Kantner after its demand for 30 million pesos (U.S. $590,000) was not paid.

Dear Phuc Que, I still believe the Vietnamese government's got more than enough money to pay for the ranson. You should ask yourself why they didn't pay ? It's the least of their concern mate. The sailors are not their relatives and these people can die 5 times over and the Vietnamese wouldn't care less.

Kidnapped Vietnamese will end up beheaded because Vietnam hasn't got the money to pay for their release. Vietnam likes to boast about defeating China. Let us see them defeat the Abu Sayyafs swines.

I would never praise VNmese communists, but 1 thing that they can do well and wrote books about is gorilla warfare. Although they may not be familiar with the region, but they'll prevail! Remember, they only took several weeks to put down Polpot!
Too bad, we don't have Pay-per-View on this! Sorry, bad joke. Lives, politics, and faith are at risks here. This is a global problems. One that we yet have a peaceful resolutions.

The Vietnamese government is still stupid as always even when it comes to incidents such as this. Coverage of negative events are rare in the country and this will only serve as the turning point that someday, the communist goverment will hopefully collapse and had to pay what they did to Cambodia and Laos.