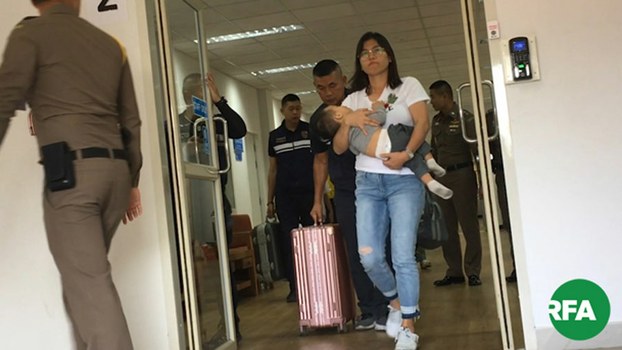 Authorities in Thailand detained the wife and children of Arakan Army (AA) commander-in-chief Major General Tun Myat Naing this week at the Thai-Myanmar border and appear set to deport them, RFA learned on Friday.

The detentions in the northern Thai city of Chiang Mai were condemned by rights groups because the scenic city has been known for giving sanctuary to Myanmar expatriates and exiled democracy leaders during decades of military repression and war in Myanmar.

Myanmar authorities alleged that 10 relatives of Tun Myat Naing, including Hnin Zar Phyu, daughter of the speaker of the Rakhine state parliament, are involved in destructive activities against Myanmar, the sources said.

Hostilities between the Myanmar military and the AA, an ethnic Rakhine force seeking greater autonomy in the state, escalated a year ago in northern Rakhine state, resulting in dozens of civilian deaths and displacing more than 90,000 local residents.

“The Myanmar government has given a list of at least 10 individuals, including the wife of Tun Myat Naing, to Thai authorities, so when they came to immigration to extend their visa, their names must have showed up in the wanted list,” said a member of the Thailand-based Rakhine Human Rights Group who has been helping the detainees.

Myanmar authorities in November informed Hnin Zar Phyu that her passport was invalid and that she was not recognized as a citizen of Myanmar, the source said, citing Thai authorities.

Hnin Zar Phyu and her children have been living in Thailand for over a decade and she attended a gathering of AA supporters in Chiang Mai with her husband, the source said.

Zaw Htay, spokesmen for the President's Office, and Chan Aye, director general of Myanmar's Ministry of Foreign Affairs, did not answer phone calls from RFA.

“It is too early to say anything. Since I don’t know the situation as black and white, I don’t want to say something incorrectly. I will wait and see,” San Hla Kyaw, an Arakan National Party lawmaker and chairman of the Rakhine state parliament, who is the father of detainee Hnin Zar Phyu, told RFA.

“From a human rights perspective, they cannot detained them. They are just family members and not proven to be involved in the insurgency,” he said.

“If the military or government wants to prosecute the AA as terrorist group, they have to act against the AA leaders exclusively. Arresting the family members of an insurgent group leader is illegal, and I see it as violation of human rights,” added Maung Saungkha.

“It is very inhumane to detain a woman and two children to keep them as hostages,” said human rights activist Thinzar Shoon Lae Ye.

The sister and brother-in-law of Tun Myat Naing were arrested in October by Thai authorities and transferred to Myanmar, where they now face terrorism-related charges.