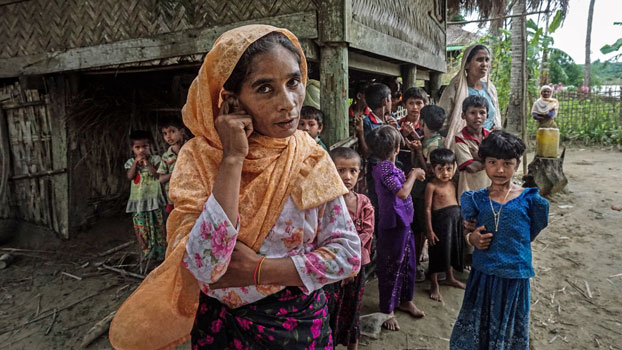 At least one Rohingya Muslim was killed by a stray bullet and three others were wounded Wednesday when mortar shells fell on their village, burning more than 30 homes, in Myanmar’s conflict-ridden northern Rakhine state, eyewitnesses said.

A resident of Buthidaung township’s Phone Nyo Leik village, a mostly Muslim community near Kyarnyobyin and Thayatpyin villages where shelling blasts set houses ablaze, died Thursday after being hit by a bullet during the latest clash between Myanmar forces and the rebel Arakan Army (AA), villagers said.

Phone Nyo Leik leaders told RFA’s Myanmar Service that Sean Shu Arlong, who was in his 40s, was working outside the community village and was hit by the bullet while he was sitting at a nearby food stand.

A village elder who wished to remain anonymous out of fear for his safety said the bullet hit the man’s waist, and he died as he was taken to Buthidaung Hospital by motorboat.

“We contacted the ICRC [International Committee of the Red Cross] through the township administrator,” he said. “The boat from the ICRC arrived and took him to hospital, but he died on the way.”

Some village elders said armed engagements between the AA and the Myanmar military in the area have intensified, and they did not know which side was responsible for the gunshot that killed Sean Shu Arlong, who was later buried in Phone Nyo Leik village.

Other villagers said that mortar shells that fell in Thayatpyin village near a bridge over Sai Din Creek burned six houses on the ethnic Rakhine side of the village and 29 houses on the Muslim side.

Both Rakhine and Rohingya residents had fled to safety when the firing began, they said.

‘Only one was left’

A woman who lives close to the village and witnessed the blaze caused by the shelling said she emerged from a bomb shelter where she sought safety during the shelling and saw columns of smoke rising from Thayatpyin village.

“About six houses were burned on the Rakhine side of the village,” said the woman, who declined to be identified out of fear for her safety. “There were as many as 30 Muslim houses. Twenty-nine of them were burned. Only one was left.”

Soldiers from the government military fired both heavy and light artillery, causing residents of the Muslim village to flee, she said.

The shells hit one home, which exploded, with the flames from the fire spreading to other houses amid windy conditions, she said.

Other residents said the Myanmar military’s consistent shelling attack on the village caused the blaze.

At the same time, shelling blasts in Kyarnyobyin Muslim village badly injured three Rohingya who are being treated in Buthidaung Hospital. They include a two-year-old child, a 45-year-old woman named Shunar Barnu, and a 32-year-old man Mhamad Zaw Leik, locals said.

A villager who visited the three injured residents at the hospital said Shunar Barnu and the child were unconscious as of Thursday evening local time.

He also blamed Arakan troops for causing the blaze by shelling in the areas as well as for the subsequent civilian injuries and deaths.

“The blazes weren’t caused by our firing,” Win Zaw Oo said. “They [the AA] fired into Kyarnyobyin Muslim village on purpose. The Muslim villager from Phone Nyo Leik was also killed by their shooting.

Win Zaw Oo went on to say that AA members who live in Thayatpyin started the fire when they shot from the village at Myanmar soldiers.

“We had to fire back at them in their direction,” he said. “It is the nature of battle. If we don’t fire back, our soldiers could be killed.”

AA spokesman Khine Thukha told RFA that Arakan forces had not participated in any armed engagements in Buthidaung township on Wednesday, and blamed the shelling in the area on Myanmar forces.

The armed conflict between Myanmar forces and the AA has killed at least 90 civilians and displaced tens of thousands of civilians in Rakhine and neighboring Chin state since hostilities escalated in late 2018.

Though violent military-led crackdowns in northern Rakhine state in 2016 and 2017 together drove more than 740,000 Rohingya from their homes and across the border into Bangladesh, about 600,000 Rohingya still live in Myanmar.