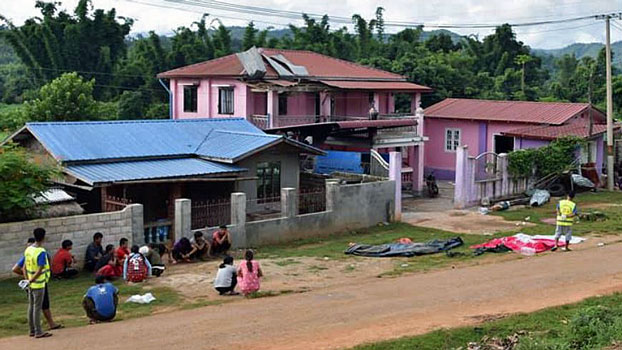 Neighbors sit near the house (C) where a village militia chief and his wife were shoot to death in Mong Yang village, Lashio township, Myanmar's northern Shan state, Aug. 21, 2019.
RFA

A village militia chief and his wife were shot dead Tuesday evening by unknown gunmen in Myanmar’s war-ravaged northern Shan state, while a government official said recent coordinated attacks by rebel armies in the region have seriously affected crucial trade routes with China.

Chinese-speaking and Shan-speaking assailants killed Win Maung, militia chief of Mong Yang village-tract, and his wife when they threw grenades and fired several shots from all directions into his home and office in the village in Lashio township, locals and a family member who survived the attack said.

Win Maung’s two sons and two daughters were away from home on a trip when the attack occurred, but his grandson was in the house and managed to escape.

“I heard the blasts sounding like fireworks,” the grandson said. “I tried to hide, but my grandfather told me to leave the house. I asked him to come with me, but he didn’t. I jumped out of the house and ran into the fields.”

He said he caught up with other villagers who ran from the village during the attack, and together they tried to hide on the other side of the river.

“We waited until the shooting stopped and went back to look at the house only to find the dead bodies,” he said. “It’s tragic because I lost my grandparents. My mother is also away, trying to make some money in China.”

Win Maung was found dead in a locked bathroom inside the house, while his wife was shot outside and had wounds on her face, villagers said.

They also said that they found two unexploded grenades on the veranda and near the bathroom, and discovered another inside the residential compound.

The assailants also burned down some rooms in the house, they said.

Win Maung’s brother-in-law said the deceased man was a military veteran who had retired from the Myanmar military’s Lashio-based Infantry Regiment No. 68 and was involved in the militia Mong Yang village for about 10 years.

Maung Sein, commander of the Kaungkha militia group, said the shooting was the first such incident to occur in the village.

Villagers said they could not determine which armed group was responsible for the violence.

They also said that no armed clashes between Myanmar forces and ethnic rebel groups active in northern Shan state had taken place in the area, though a Myanmar Army column arrived in the village on Monday.

An alliance of ethnic armed groups comprising the Ta’ang National Liberation Army (TNLA), the Arakan Army (AA), and the Myanmar National Democratic Alliance Army (MNDAA) have been battling the government military for greater autonomy, territory, and resources in their respective areas in Shan and other states.

But TNLA Major Mai Aik Kyaw, who is in charge of media relations on behalf of the alliance, said he did not have any reports about the shooting.

The three armed groups on Aug. 17 advised local militias to stay close to their communities and out of the Myanmar military’s operations.

They also said that Myanmar soldiers had been wearing militia uniforms to disguise themselves, and warned that they would attack any militia or police squad working with the military.

Two local militias are active in Mong Yang village — the 60-member Mong Yang group and the eight-member Kaungkha group, an offshoot of another militia based in nearby Jaryan village,  Maung Sein said.

Amid the ongoing violence in the region, the three ethnic armies launched coordinated attacks on Aug. 15 on five sites in northern Shan state and Mandalay region, including a bridge, police checkpoints, and a military academy, killing 15 people and causing more than 280 million kyats (U.S. $177,100) in damage, according to the government.

Since then, four others have been killed, and over 2,000 people have been forced to flee their homes, Reuters reported Wednesday, citing government officials.

Fierce fighting has continued in northern Shan’s Kutkai township and in the area around Nanphatkar town, with the groups targeting other bridges to disrupt traffic.

A government official said Wednesday that damage from the bridge attacks had disrupted travel for commuters and truck drivers transporting goods along key routes to and from China.

Kyaw Lin, Myanmar’s deputy minister for construction, said it remains unclear how much the trade disruptions will cost while the bridges are being repaired, though road travel would soon be restored.

A team of military engineers completed work at one of the damaged bridges between the towns of Lashio and Goke Twin on Tuesday, and was working on another big bridge on Wednesday, he said.

“Inspections have been made, and everything is said to be fine,” Kyaw Lin said. “It’s expected that they will complete the work on three bridges that were damaged within a week, and transportation will be smooth once the work has been done.”

He also said that a new bridge would be built next to Goke Twin Bridge along a roadway connecting the cities of Mandalay and Muse in northern Shan state. In the meantime, engineers have built a temporary structure to replace the heavily damaged Goke Twin Bridge.

Nevertheless, Kyaw Lin expressed caution about the flow of exports to China and said he hoped that normal trade would be restored once all the bridges were repaired.

“Normal trade will resume soon,” he said. “There’s no reason to stop [trading] because of the fighting.”

Travelers could expect delays along the Kunlong-Chinshwehaw border area in Shan state, a designated border economic zone between Myanmar and China, where another damaged bridge in that area is under repair, he said.

China’s Foreign Ministry said this week that it opposes the recent attacks because they have harmed stability in northern Myanmar.