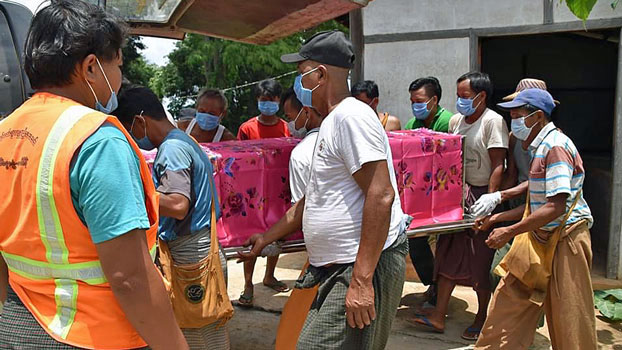 Villagers carry a coffin with the body of Lone Hsu, a resident of Pan Kin village who was shot dead by a Myanmar soldier, in Kyaukme township, Myanmar's northern Shan state, June 30, 2020.
RFA

The Myanmar military has admitted that its soldiers were responsible for the killing of a civilian amid a clash with a local ethnic army in restive northern Shan state in late June, which prompted a protest by thousands of local residents demanding justice for the slain noncombatant.

Military spokesmen told RFA on Wednesday that troops were responsible for shooting the civilian in Pan Kin village, Kyaukme township, on June 29, and said the squadron commander would be court-martialed because the shooter — an infantry soldier — had already been killed in battle.

The military engaged in combat with the Restoration Council of Shan State/Shan State Army-South (RCSS/SSA-S) two days after it accused rebel soldiers of crossing without advance notice into army-controlled territory when it burned a cache of illegal drugs on June 26.

The military opened an investigation after an estimated 10,000 Kyaukme residents protested in early July, demanding justice for the shooting victims and for the beating of another local from nearby He Kwi village who was taken by soldiers and forced to serve as a guide.

“We briefly learned from the investigation that a civilian was mistakenly shot and killed during the combat,” said military spokesman Major General Zaw Min Tun. “We also learned that some of our soldiers had beaten local civilians.”

The military’s No. 2 Tactical Operation Commander under the North Eastern Command based in Lashio is leading the investigation that began on July 13, spokesmen said.

Meanwhile, it has concluded that the shot that killed Lone Hsu was mistakenly fired due to a shortcoming in supervision, he said.

Because the soldier who fired the deadly shot was killed in action, military officials will prosecute the platoon commander, he said.

Despite the admission of responsibility, the military has not issued a statement on the incident.

A local lawmaker and a Buddhist abbot both expressed concern over the military’s investigations, saying they need to be transparent.

“They should release the details of the investigations of the incident and the punishments that the offenders receive,” said Sai Tun Win, a lawmaker from Kyaukme township.

He also raised questions about the number of shooters, noting that villagers he and other officials interviewed after the incident said there were two soldiers who fired the fatal shots that hit Lone Hsu during one-sided gunfire.

“Now, the military says that the offender was killed in combat. This is a big discrepancy,” Sai Tun Win told RFA.

“The local villagers said there was no combat in the area. I believe they are not transparent,” he said, adding that soldiers did not inform the victim’s family of the shooting or offer compensation.

Sandi Mar, a Buddhist abbot from Pan Kin village, called on the military to punish those responsible and pay compensation to the relatives.

“The military should give proper punishments to the offenders and make sure it doesn’t happen again,” he said. “These kinds of shootouts happen frequently.”

“The military should also pay compensation to the relatives of the victims,” he added.

During the July protest, the military summoned police officers, a doctor, and members of civil society groups who had assisted villagers at the time of the shooting to Light Infantry Battalion No. 506 in Kyaukme for interrogation. The following day, local lawmaker Sai Tun Win was questioned at the township administration office.

When a military official visited the two villages where the shootings and beatings took place, there was a standoff with RCSS troops, and local humanitarian groups were asked to help evacuate civilian administrative officials from the villages.

‘Since we were born’

Local lawmakers from the Shan Nationalities League for Democracy (SNLD) party have filed a complaint about the shooting with the Myanmar National Human Rights Commission.

The commission told RFA that it is still processing related information from relevant ministries and could not comment.

Shan state, Myanmar’s largest state and home to the country’s second-largest ethnic group, has been under armed conflict between government forces and numerous ethnic-based armies fighting for autonomy since 1958, 10 years after the former Burma gained independence from Britain in 1948.

“We have witnessed these armed conflicts since we were born,” said Tin Maung Thein, chairman of local charity group the Kyaukme Social Assistance Association.” We don’t want them anymore.”

“It’s good to have transparency and accountability, but it would be best to stop all the armed conflicts and offer protection for civilians,” he said.