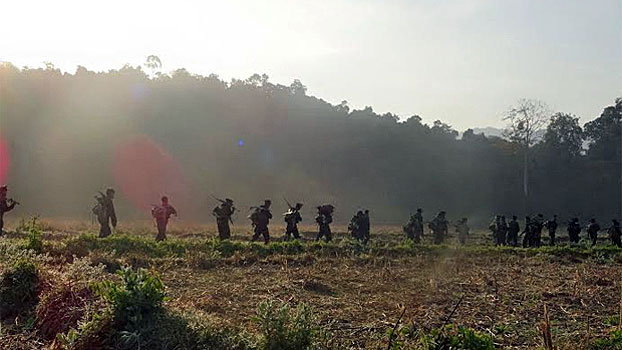 The use of civilian clothing by soldiers of the ethnic Rakhine rebel Arakan Army (AA) in skirmishes with Myanmar’s military in Rakhine and Chin states has led to a substantial increase in arbitrary arrests of villagers by government troops, sources said Thursday.

In recent days, a video has gone viral on social media purporting to show plainclothes members of the AA launching an armed attack on a military training center in the Kanni area of Rakhine state’s Minbya township in March.

Brigadier Gen Zaw Min Tun from the Military Information Committee confirmed to RFA’s Myanmar Service that troops were fired on by insurgents in civilian clothing during the attack.

“It was an attack on the military training facility in Kanni area of Minbya township,” he said of the video.

“The AA’s elite members from nearby villages disguised themselves as civilians and launched the attack. All the attackers who were captured or killed were wearing plainclothes. That’s why we have been saying that AA troops are doing this.”

The military has repeatedly said they cannot distinguish AA members from civilians because the rebel troops do not wear uniforms and hide among civilians, and has used the claims to justify a campaign of arrests and interrogations in the areas where the rebel army operates.

According to the Thazin Legal Aid group, which is based in the Rakhine capital Sittwe, more than 500 people were taken into custody by the military and charged with having ties to the AA in 2019 alone.

However, AA spokesperson Khine Thukha denied that soldiers from his rebel army purposefully disguise themselves as civilians when engaging with the military.

“Civilians are distinguishable from soldiers, who mobilize with their military units—even without uniforms,” he told RFA, adding that “no soldier travels alone.”

“Myanmar’s military is using this accusation as an excuse to shoot and kill civilians.”

Additionally, military troops disguise themselves as civilians to attack AA troops, he said, without providing details.

Observers said the use of plain clothes by AA soldiers is causing the military to arrest an increasing number of civilians due to the difficulty in distinguishing them from combatants.

Zaw Zaw Tun, the secretary of the Rakhine Ethnic Congress told RFA that AA members regularly “fight in plainclothes and engage with the local civilian population.”

“The situation is not clear cut—that’s why the military arrests everyone as suspects to make their job easier,” he said.

“The law allows the military to arrest people and interrogate them based on suspicion alone, but the authorities need solid evidence to file charges with the court,” he said.

“There are many cases in which the suspects were released after a trial. These arrests based on unfounded suspicions are seriously affected the people.”

Political analyst Maung Maung Soe told RFA it is normal for insurgent forces engaging in guerilla warfare to live among civilians and fight in plain clothes.

He said the military should work with residents to distinguish between AA fighters and civilians, instead of arresting everyone as potential insurgents.

“We have seen fighters blend in among civilians during armed conflicts … such as during the Vietnam War,” Maung Maung Soe said.

“The military holds the stereotypical viewpoint that all local civilians are conspirators and enemies—this is a serious problem for them,” he added.

“In real warfare, it is crucial to gain the support of local civilians. The military should try to win their hearts. If they act from the perspective that all local villagers are insurgents, the results will not be good.”