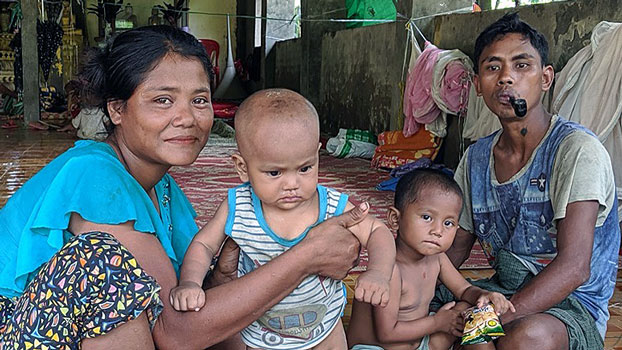 A family from Panmyaung village in Minbya township, western Myanmar's Rakhine state, seeks shelter in a monastery after fleeing their home amid armed conflict, Aug. 27, 2019.
RFA

Fighting between Myanmar forces and Arakan Army insurgents has prompted about 5,000 residents from two villages in war-ravaged Rakhine state’s Minbya township to flee their communities since hostilities in the area began four days ago, residents said Tuesday.

Those who fled Panmyaung and Shwekyin villages have sought shelter in Buddhist monasteries or with relatives because of the random firing of heavy weapons by Myanmar troops now stationed on Aung Mingalar Hill in the middle of Panmyaung, they said.

“The [Myanmar] military has been firing indiscriminately from its base on Aung Mingalar Hill,” said Panmyaung resident Kyaw Zin.

Of the more than 8,000 people who live in Panmyaung village alone, only about one-third have remained behind, he said.

“All the villagers from Panmyaung village are terrified, and many have fled. Now, only a third of the villagers are left, remaining behind to take care of their belongings,” Kyaw Zin said.

Many villagers are staying temporarily with family members who live in the towns of Mrauk-U, Minbya, and Sittwe, he said.

“Right now, there is some firing from Aung Mingalar Hill as we speak,” he told RFA’s Myanmar Service via phone at around 4 p.m. “People who are ill will not survive amid these loud blasts.”

Nyo Maung Thein, administrator of nearby Shwekyin village and a resident of Kyaung Taung village, reported that government soldiers have been firing from military helicopters since shooting began in the morning.

“They have been shooting the entire day since 7 a.m.,” he said. “Now, two helicopters have flown over. … They fired from the helicopters to the northeast of Panmyaung village. That area is northwest of Shwekyin [village].”

A resident of Kyaung Taung village confirmed the aerial attacks.

“It is not just our military firing the weapons,” he said. “Both sides are firing at one another during the battle.”

“It is true that there were armed engagements in the region east of Panmyaung village,” he said. “There is an AA camp over there, and we are trying to capture that camp. There are no other clashes [in the area].”

Zaw Min Tun said Myanmar troops were stationed near Panmyaung to ensure the security of the Yangon-Sittwe highway which passes through the area.

“The residents of the village feared that the tragedy that occurred on Aug. 24 might be repeated, so they fled the village,” he said, referring to the day when an explosion from a stray artillery shell killed three children and injured four other civilians in Panmyaung village.

The Myanmar military and the AA blamed each other for the deaths.

The lawmaker said the villagers asked him to help them force the military to move its base away from their community by collecting signatures on a petition to be submitted to authorities.

“We decided to send the appeals with signatures to the state’s chief minister, the speaker of the parliament, and the minister for border security,” he said, adding that he would go to Rakhine’s capital Sittwe on Friday to submit the document.

AA spokesman Khine Thukha acknowledged that the two forces were engaged in combat in Monday, but said he did not know whether they had clashed near Panmyaung village.

“Yesterday there was an armed clash about two miles northeast of Panmyaung village,” he said. “I heard there are some clashes today. But I don’t have updates for today yet.” 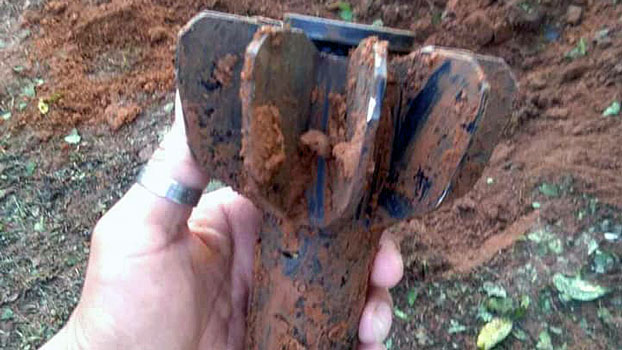 In a related development, a mortar shell blast killed one villager and injured another Monday evening amid the continuing conflict between government soldiers and three ethnic armies, including the AA, in northeastern Shan state, a villager said Tuesday.

The 50-year-old man died when he was hit by shrapnel from a stray shell that exploded near his home in Kutkai township’s Pang Say village, said a neighbor who declined to give his name out of concern for his safety.

“Some shells fell in our village around 6:30 or 7 p.m.,” the neighbor told RFA. “One shell exploded about 300 feet or so from his house. The family was not there. [The man] was about to pray upstairs when a piece of shrapnel came through the wall and hit him in the neck … and he died on the spot.”

“Because shells were in the air, nobody dared to go and help him,” he said.

Other residents told RFA there were clashes Monday evening near Lwe-saing village, west of where Myanmar Infantry Regiment 242 is stationed, and near Loi Sam Sik Hill [in the vicinity of] Kutkai, where both adversaries fired heavy weapons.

The TNLA said in a statement issued Tuesday that the Myanmar military was using heavy weapons, but Zaw Min Tun denied the accusation.

“It’s obvious who is hitting civilians,” he said, referring to the ethnic armies.

“Between Kutkai and Nanhpelkar, civilian cars and trucks were shot at,” he said. “We have recently seen nonmilitary targets being hit. They were hitting non-military vehicles without reason. People should be condemning these acts of violence.”

On Tuesday morning, a passenger car traveling from Kutkai to Muse was fired on near a garbage dump outside Kutkai, wounding a man, a RFA reporter at the scene observed.

Fighting has raged in the area for the past eight days, and traffic along the main highway has been stopped, preventing local villages from traveling to buy rice and other food supplies.

Meanwhile, China, which borders Shan state, has been pressuring the alliance of ethnic militaries to stop fighting ahead of the 70th anniversary of the founding of the People’s Republic of China at the beginning of October, spokesmen from the rebel armies said Tuesday.

Sun Guoxiang, special envoy for Asian affairs from China’s foreign ministry, met a week ago with the AA, TNLA, and the Myanmar National Democratic Alliance Army (MNDAA) in southwestern China’s Kunming city to tell them that Beijing does not accept the armed conflict, which has increased instability in the border region.

“It was like he pressured both sides to stop fighting and to talk,” said AA spokesman Khine Thukha on Tuesday. “He pressured us with the intention of having stability in the China-Myanmar border area.”

“The other thing is that the 70th anniversary of the People’s Republic of China is Oct. 1, and he wants all organizations [in the border area] to do everything with caution during this period,” he said.

The three ethnic armies, which belong to the Northern Alliance, asked Sun for assistance in resuming peace talks with the Myanmar government and military as soon as possible, Khine Thukha said.

The AA along with the Ta’ang National Liberation Army (TNLA) and the (MNDAA), conducted coordinated attacks on five locations in Shan state and neighboring Mandalay region on Aug. 15 that left 15 people dead, including Myanmar troops and policemen, in retaliation for government army offensives.

Since then, the armies have launched attacks on roads and bridges and engaged in fighting in Kutkai and Muse townships.

TNLA spokesman Major Mai Aik Kyaw said the ethnic armies explained to Sun that they launched the armed assaults to defend themselves from Myanmar military attacks.

“We have asked him [to pass our message to the government army] to stop the offensives in Rakhine, to stop recruiting, and to stop the building of new military posts in the Ta’ang region,” he said.

“Moreover, we told him that the military should let go of its hardline attitude and engage in political dialogue,” he added

The Myanmar military wants to hold peace talks with Myanmar's ethnic armed organizations, though it is not clear whether the TNLA, AA, and MNDAA will participate.

“As far as I know, the Chinese official didn’t pressure them,” he said. “The current fighting is taking place along the Union Highway, and everybody knows who is responsible for it. The [Myanmar] military has to protect people and their lives.”