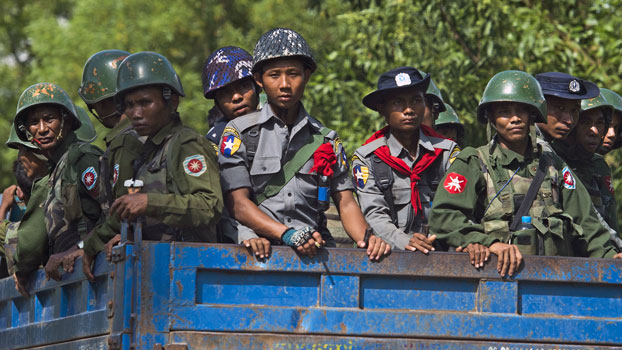 Ongoing hostilities between Myanmar forces and the rebel Arakan Army in Rakhine state forced about 1,700 civilians to flee villages in three townships this week, amid fears that they would be detained and possible tortured by national soldiers conducting “clearance operations” in their communities, locals said.

Troops have already detained five area villagers for interrogation to determine if they have ties to the Arakan Army (AA), while others who have been freed said Myanmar soldiers tortured them during questioning, leaving them with physical injuries.

More than 1,000 residents of Ywatharya village have fled their homes in the past few days after Myanmar soldiers entered the community to search for anyone with ties to the AA, villagers said.

“Clearance operations” is a term used by the military that strikes fear in local residents after numerous incidents in which soldiers have shot at or abused civilians in Rakhine state.

“People are still fleeing this morning. The rest of the people said they will leave tomorrow,” said one resident who declined to give her name out of fear for her safety.

“Of over 400 households in the village, about 100 left yesterday,” she said. “Some fled to Myebon, and some went to Minbya [township],” she said.

“Their main concern is that the military might arrest them and beat them,” the woman said. “No one dares to live in the village. People cannot do their regular work, and they now face food shortages.”

Colonel Win Zaw Oo, spokesman for the military’s Western Command, told RFA’s Myanmar Service that the residents “must have fled because they felt guilty for having done something wrong.”

After the military arrived and interrogated villagers on Nov. 9-12, soldiers took away five residents they suspected of having connections to the AA. They had initially questioned 11 residents, later releasing one after they realized they had apprehended the wrong person, villagers said.

The person released said he sustained serious injuries from beatings during the interrogation.

More than 500 residents of Thayattapin village of Kyauktaw township meanwhile also fled their homes after Myanmar soldiers and police showed up in their community to question civilians, said a villager who requested anonymity for security reasons.

The villagers fled because they were afraid of being wrongly arrested by security forces, the person said.

“The soldiers are interrogating people in the houses one by one,” the villager said. “There were investigations and arrests. That’s why people are fleeing.”

Many women and young adults were among the group that left the community, while elderly people remained behind, the person said.

“Some underage children and villagers worried that they might be wrongly detained,” the villager said.

The AA said that on Wednesday it had exploded mines targeting Myanmar troops near Thayattapin village, killing five soldiers, including a commanding officer, and injuring several others.

Colonel Win Zaw Oo said he was not aware of the mine attack near the village.

In a similar incident on Nov. 12, more than 200 villagers fled to nearby communities after a Myanmar military regiment arrived in Allmaya village in Ponnagyun township, sources said.

Hostilities between the Myanmar Army and the AA have raged in northern Rakhine state since late 2018, causing about 90 civilian deaths, displacing tens of thousands of residents, and resulting in the capture of prisoners of war on both sides.

Myanmar forces frequently search villages close to areas where clashes occur to try to root out civilians whom they believe are helping the Arakan force, which is fighting for greater autonomy in the state.

Three residents of Oohtein village in Mrauk-U township arrested by Myanmar soldiers on Sept. 20 have yet to be seen or heard from, their relatives said.

The families of Abbot U Kawi Dhamma, village administrator Wai Soe Tun, and resident Myint Maung told RFA that the Myanmar military has neither informed them of the whereabouts of their loved ones nor allowed them to see the men.

“It has been almost 60 days since my brother was arrested,” said Ma San New, the younger sister of U Kawi Dhamma. “We have not been informed or allowed to see him. I don’t even know if he still alive. People before him were killed after they were arrested.”

The three men were on their way to Kyaukkyat village when they were detained on the Kyauktaw-Mrauk-U highway near Linmwe Mountain, she said.

Colonel Win Zaw Oo said he could not recall the incident.

“You need to worry only when they get abducted by the AA,” he said “Since we are a valid organization, we conduct our investigations according to the law.”

Government spokesman Zaw Htay said at a press conference Thursday in Naypyidaw that the Myanmar government has ordered the military to conduct counterinsurgency operations in northern Rakhine state, adding that offenses committed by the AA are unacceptable.

He said the government would not accept a recent proposal by the AA for a prisoner swap because the rebel army’s activities are not legal.

“We should question if the AA is an armed force with a systematic formation and established line of command,” he said. “It seems that they don’t know the international standards and convention agreements on using conspicuous military uniforms, insignias, and manuals for operating guns and weapons, so we will not negotiate with them for a POW exchange.”

He added that it was unacceptable that the AA has abducted police officers, soldiers, government employees, and a local lawmaker elected by citizens.

AA spokesman Khine Thukha suggested that the Myanmar military is turning its back on its soldiers by not accepting the POW exchange offer.

“I don’t know if they don’t understand the definition of POW or if they are turning their backs on fellow soldiers captured in the battle,” he said. “If a soldier is captured by a belligerent side, he is classified as a POW. This decision shows their lack of comradeship.”

Concerning peace talks with the four rebel armies, including the AA, that comprise the Northern Alliance, Zaw Htay said the government is assessing their sincerity in securing a peace deal.

The government is also assessing the possibility of the four armies moving ahead to sign a nationwide cease-fire agreement (NCA), already inked by 10 other ethnic armies, after they agree to a bilateral cease-fire pact, Zaw Htay said.

Government peace negotiators have been meeting this year with the Northern Alliance groups to try to nudge them closer to a cessation of hostilities.

The TNLA, however, questioned the sincerity of the government's intentions.

“If they don’t have any goodwill towards a cease-fire, then there is no reason for us to attend peace talks,” said TNLA spokesman Mei Eik Kyaw.

“So far, we have been present at every peace talk,” he said. “I don’t know what their intention is in talking to the media like that.”