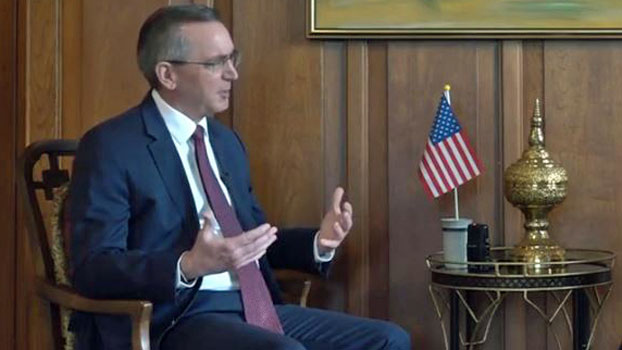 U.S. Ambassador to Myanmar Scot Marciel discusses accountability for those who have committed human rights abuses in the country at the U.S. Embassy in Yangon, Oct. 31, 2019.
RFA video screenshot

The United States supports accountability for human rights abuses committed by the Myanmar military against Rohingya Muslims and other minority groups during conflicts with ethnic armies, the U.S. ambassador to the Southeast Asian country told RFA on Thursday.

A military-led crackdown targeting the Rohingya in northern Rakhine state that began in 2017 left thousands dead and forced more than 740,000 others to flee to safety in Bangladesh. Armed conflicts in other far-flung regions of the country meanwhile have left scores of civilians dead and driven tens of thousands from their homes and into displacement camps.

Myanmar has largely denied responsibility for the campaign of violence in northern Rakhine, which included indiscriminate killings, mass rape, torture, and village burnings, and defended the actions of its military as a necessary counterinsurgency against Rohingya militants who attacked police outposts in the region.

“We support justice and accountability not only in Myanmar, but everywhere around the world,” U.S. Ambassador Scot Marciel told RFA’s Myanmar Service in an exclusive interview at the U.S. Embassy in Yangon. “And there has not been accountability and justice here for those human rights abuses.”

An investigation by an independent fact-finding mission (FFM) appointed by the U.N. Human Rights Council found signs of genocidal intent in the 2017 military campaign, and the international body has pushed for top army brass to be prosecuted at the international Criminal Court for their roles in the atrocities, well-documented by the FFM and human rights groups.

The FFM has also urged the international community to cut off financial aid to Myanmar’s military.

In addition, the FFM has declared that hundreds of thousands of Rohingya still inside Myanmar continue to face systematic persecution and live under the threat of genocide.

Only a handful of soldiers have been prosecuted in Myanmar for their roles in the massacre, including 10 soldiers who were court-martialed for brutally killing Rohingya men and boys in Rakhine’s Inn Din village, though they were freed in November 2018 after serving less than one year of their 10-year prison terms.

Marciel stressed the need for accountability in bringing other war crime perpetrators to justice, but added that he’d like to see Myanmar in charge of the process.

“What we care about are the results, so that there is accountability, and there are different ways of bringing that about,” said Marciel, a veteran diplomat who has served as ambassador to Myanmar since 2016. “What we would prefer to see is a Myanmar domestic process that people who commit human rights [abuses] are held accountable.”

“So far, not only with Rakhine but elsewhere, people in the military who have carried out human rights abuses have not been held accountable,” he said. “That’s a problem for Myanmar. So, our hope will be that civilian authorities and the military would make a commitment to try to promote serious accountability — again, not to satisfy us, but to satisfy the people of this country.”

Marciel did not dismiss the option of using international accountability mechanisms, which he said would be the only alternative if there is no domestic accountability.

The U.S. has enacted sanctions against Myanmar military commanders, including armed forces chief Senior General Min Aung Hlaing, freezing their U.S. assets and prohibiting them from traveling to the country.

‘More work to do’

The current civilian-led government under State Counselor Aung San Suu Kyi is trying to end decades of internal armed conflict by facilitating periodic talks among government negotiators, the military, and ethnic armies, but the process has stalled amid ongoing hostilities in Rakhine, Kachin, and northern Shan states.

“I got here a week before this current government took office, and it was good to see a democratically elected government,” Marciel said. “But there’s certainly more work to do to build a stronger democracy — full democracy in which all members of parliament are elected and in which the military is answerable to the civilian authorities.”

Aung San Suu Kyi's ruling National League for Democracy (NLD) party, which won the country’s 2015 elections by a landslide after decades of army-backed rule, promised prior to the vote to amend the constitution in part to limit the political power of the military, which holds an automatic quarter of seats in the national and regional legislatures.

The government believes that reform of the existing constitution, drafted more than a decade ago by a former military junta that ruled the country, is necessary so that Myanmar can move closer to forming a federal democratic union.

Once in power, however, the NLD backed off from pursuing the issue so as not to damage its delicate power-sharing arrangement with the military.

The NLD took another shot at constitutional reform earlier this year when one of its lawmakers called for the formation of a parliamentary joint committee to propose democratic changes to the charter by abolishing or amending articles enshrining the power of the country’s military in politics.

The committee, which includes lawmakers from all parties and the military, is still debating proposed amendments.

Marciel’s comments came two days after Aung San Suu Kyi met with U.S. Assistant Secretary of State David Stilwell in Naypyidaw to discuss continued support for the country’s democratic and economic transition as well as the plight of Rohingya Muslim refugees, the U.S. Embassy in Yangon said in a statement on social media.

The two also talked about working together to resolve the Rakhine crisis and addressing underlying grievances in conflict areas, as well as the benefits of responsible investment, the statement said.