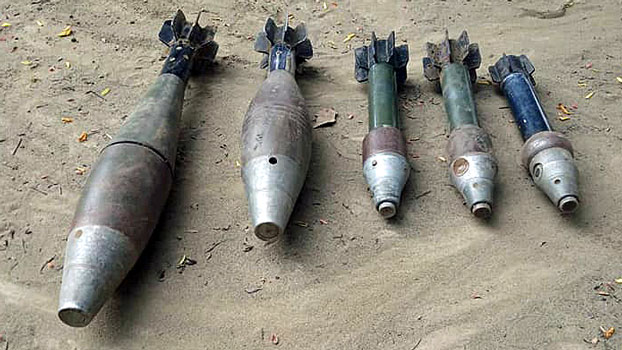 Unexploded ammunition is found after a clash between the Myanmar military and Arakan Army in Kyauktaw township, western Myanmar's Rakhine state, May 19, 2019.
RFA

An explosion from a stray artillery shell killed three Myanmar children and injured four other civilians on Saturday in a village near strife-torn Rakhine state’s Minbya township, amid fighting between Myanmar forces and the rebel Arakan Army, each of which blamed the other side for the deaths.

Panmyaung village and the hills east of the community have seen fighting between the two sides since Aug. 23, with government soldiers now stationed in the village and firing heavy weapons, said village administrator Tin Aung Kyaw.

Most residents have fled the community and have sought shelter in nearby areas, he said.

“So far, some shells being fired from the hills have fallen into the village,” he told RFA’s Myanmar Service. “The villagers have fled and taken shelter in places like monasteries. Some have fled to towns like Minbya. They are all frightened. I still remain in the village.”

“On Aug. 24, the Myanmar military fired heavy weapons into the village from Aung Mingalar Hill close to the village,” he said. “It killed three children and badly injured three others who are in the hospital.”

He told the Myanmar Times that artillery shells landed on a house in the village, killing a 16-year-old student, a six-year-old, and a nine-year-old.

But Colonel Win Zaw Oo, spokesman for the Myanmar military’s Western Command responsible for Rakhine state, denied the accusation and claimed that the AA was responsible for the civilian deaths.

“The shelling that killed these children was fired by the Arakan Army,” he said. “They are trying to contradict us in one-sided accusations. The truth is the shells fired from the enemy side as a counterattack to us fell into the village.”

The shelling came from east of Panmyaung village, and afterwards AA soldiers repositioned themselves in the surrounding hills, which Myanmar forces are trying to capture, he said.

Win Zaw Oo said he felt sorry about the civilian deaths due to the fighting, and accused some village residents of actively supporting the rebel force.

“Villages like Panmyaung, Paledaung, and Kyaungdaung are hardcore supporters of the Arakan Army,” he said.

The Myanmar military arranged to send the four injured civilians to a hospital by boat along Panmyaung Creek.

“We asked for their [villagers’] help to use the boats, but they refused,” Win Zaw Oo said. “But if it was the AA that needed help, they would send out their boats even in the middle of the night.”

“Our troops are temporarily stationed in Panmyaung village because it is the best way to control movement in the area,” he added. “They are still fighting today.”

But Khine Thukha countered that villagers must adhere to demands by both sides.

“There are several villagers who work with the military, and he [Win Zaw Oo] wasn't bothered by that,” he added.

Khine Thukha then went on to accuse the government army of mistreating civilians during the armed conflict.

“Even if we had arrested them, we'd treat them properly and in a humanitarian way and release them later,” he said. “But the Myanmar military is doing the opposite. They have a fascist mindset that whoever supports the rebels are also rebels and make trouble for ethnic minority civilians all the time.”

Both the Myanmar military and AA have detained civilians during the fighting in Rakhine state which flared up late last year as Arakan forces continue their push for greater autonomy in the state. Dozens of civilians have died or been injured in the conflict. 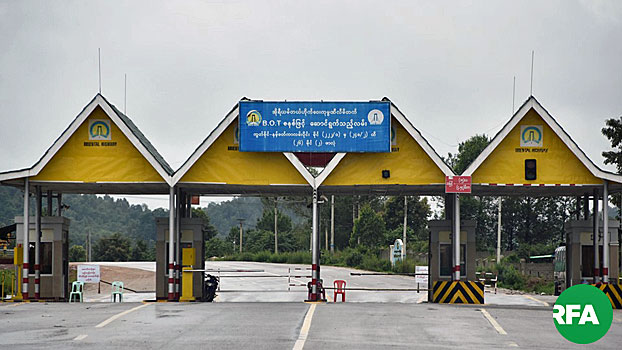 A toll gate stands along the Kutkai-Nanhpelkar Road in Myanmar's northern Shan state in an undated photo. Credit: RFA

Amid other hostilities involving Myanmar forces in war-torn northern Shan state, an alliance of ethnic armies battling government troops issued a statement on Sunday warning travelers to stay off roads in combat zones.

The AA, the Ta’ang National Liberation Army (TNLA), and the Myanmar National Democratic Alliance Army (MNDAA) — three of the four ethnic armies that comprise the Northern Alliance — accused Myanmar soldiers of pretending to be civilians and using vehicles owned by NGOs and local militias to transport weapons.

RFA could not reach the AA or TNLA for further comment on the statement.

“We use only military tanks and trucks,” he said. “We have no reason to use civilian vehicles as we have our own transportation unit.”

Zaw Min Tun surmised that the AA leveled the accusations to give the ethnic army a legitimate reason to stop and search passenger cars.

“This accusation is like a cover for them if they do anything wrong [to civilians],” he said.

He said that while videos of Myanmar soldiers on roads in the region posted on social media likely prompted the AA to make the allegations, the government army has been ensuring the safety of road passengers.

“The military is working for people’s safety, and transportation and road safety,” he said. “Everybody sees what we do. You can see what we do in the video files that people took and posted on social media.”

The ethnic armies issued the statement 10 days after they carried out deadly coordinated attacks on five locations in northern Shan state and neighboring Mandalay region in retaliation for what they said were military offensives launched again them.

In the days following the violence, there have been attacks on humanitarian workers in ambulances and aid vehicles that help injured and trapped civilians and deliver food to some of the thousands of villagers who have been displaced by the latest round of armed strikes in the region.

On Monday, fighting continued in parts of Kutkai and Muse townships, and some rescue vehicles were able to reach displaced civilians, the online journal The Irrawaddy reported.

Ko Myo from Philanthropists Without Borders Association, a humanitarian group based in Lashio, said aid workers first need to get permission from relevant authorities before entering areas in the conflict zone.

“We are not free to go and help them because there are other laws and rules [for us to follow],” he said.