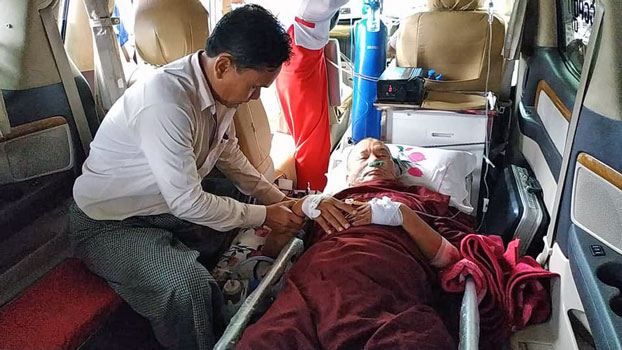 A Buddhist abbot injured by a mortar shell explosion at a monastery near Meewa village, Kyauktaw township, in western Myanmar's Rakhine state, is transported to Sittwe General Hospital, Oct. 1, 2019.
RFA

Five civilians were injured early Tuesday by mortar shelling in western Myanmar’s war-ravaged Rakhine state, with local residents accusing the government military of intentionally launching the assault on their community.

The shells exploded in Meewa village in Kyauktaw township around 1 a.m., hitting homes and a nearby Buddhist monastery, and injuring the abbot, a novice monk, a teacher, and two students, a village official and a relief worker from a local humanitarian group said.

Village administrator Aung Kyaw Nyunt told RFA’s Myanmar Service that mortar shells that appeared to be deliberately aimed at the community hit the area while most people were asleep, damaging many houses and the monastery.

“They were firing at the village,” he said. “The shelling hit both the monastery and homes in the village. “The roofs were smashed, and even property inside the houses were damaged. The monastery … had minor damage, and its windows were broken.”

Nyi Pu, chairperson of the Phyusin Myittar philanthropy group, said both the abbot and the novice were first sent to Kyauktaw Hospital where they were found to be in critical condition and later were transferred Sittwe General Hospital.

“The novice had a head injury,” he told RFA’s Myanmar Service. “The abbot was injured below the right chest and was in critical condition, but now his condition is improving.”

Residents accused government forces of targeting their village, saying the shelling did not result from ongoing fighting between the Myanmar military and the Arakan Army (AA) in northern Rakhine state.

‘We have to fire back’

“Our troops were conducting regular security operations along the Kaladan River,” he told RFA. “The AA fired heavy weapons at our troops … from the same area as they did previously. This time they were firing from there for about 20 minutes.”

Win Zaw Oo said he had not been informed about the injured villagers.

“With regard to civilian injuries, we have already informed [the AA] not to start any fighting near villages,” he said. “Why do they have to fire at us when we are near a village? [But] if they start a fight, we have to fire back at them. Otherwise, our soldiers will be killed or injured.”

But he told the online journal The Irrawaddy that there was no military engagement in Meewa village on Tuesday, and said AA soldiers skirmished with Myanmar troops in Minbya and Myebon townships.

A Myanmar military vessel transporting food supplies was attacked by the AA near Meewa village on Sept. 29, sending villagers scurrying to safety.

Heavy explosions during the attack injured 60 year-old Thar Tun and 22 year-old Naing Lin Soe, who were both taken to the hospital for treatment.

Fighting between Myanmar and AA forces has raged in northern Rakhine state since late 2018, displacing tens of thousands of civilians.