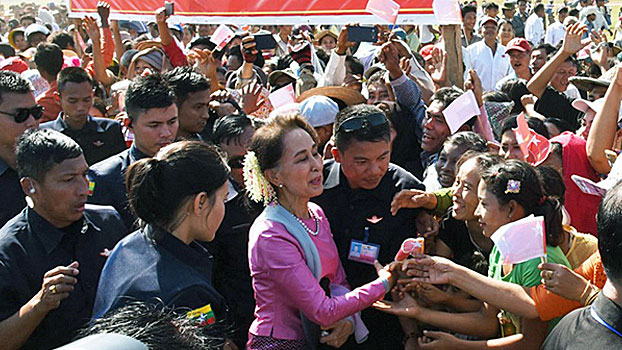 A series of minor mine explosions along a road in war-ravaged Rakhine state on Thursday did not deter Myanmar leader Aung San Suu Kyi from a planned visit to Munaung Island to open a new solar power plant, local residents and a police official said.

The blasts occurred about three hours before the state counselor was scheduled to attend the opening ceremony of the facility built by Posco Daewoo Corp., South Korea’s largest trading company, on the island township in Rakhine’s Kyaukpyu district. She was due at the solar plant at 9:30 a.m.

“It was a few minutes after six o’clock in the morning, though I didn’t hear the explosions very well because I had headphones on,” said a hotel employee who declined to give his name because he was not authorized to speak to the media.

“But my coworkers and other people around heard it, as it was loud,” the staffer said. “One of my colleagues said he heard three mine explosions.”

Munaung town resident Lin Pyae Hein told RFA that the blasts occurred more than five miles from the solar power plant factory, and that others reported hearing three explosions, though no one was injured.

“There was high-standard and systematic security at the hall where the opening ceremony was held and along the beach as well,” he said.

“Daw [honorific] Aung San Suu Kyi said the government would work as soon as possible to build roads and hospitals that locals have requested, and that peace is needed in the region in order to support development.”

“[She said] we shouldn’t solve problems with weapons, but with political talks,” Lin Pyae Hein said. “If we have peace in the region, we would have investment, she said.”

Police Lieutenant Colonel Maung Maung Soe of the Rakhine State Police Force told several reporters that the explosions were small, and that it was not known which group was responsible for them.

Myanmar forces have been fighting with the Arakan Army (AA), an ethnic Rakhine armed organization that seeks greater autonomy in Rakhine state, in a surge of hostilities that began about a year ago. The fighting has resulted in dozens of civilian deaths and displaced more than 90,000 residents.

AA spokesman Khine Thukha told RFA that the ethnic army was not involved in the mine blasts on the island.

RFA could not reach Colonel Win Zaw Oo, spokesman for the Myanmar’s military’s Western Command which is responsible for Rakhine state.