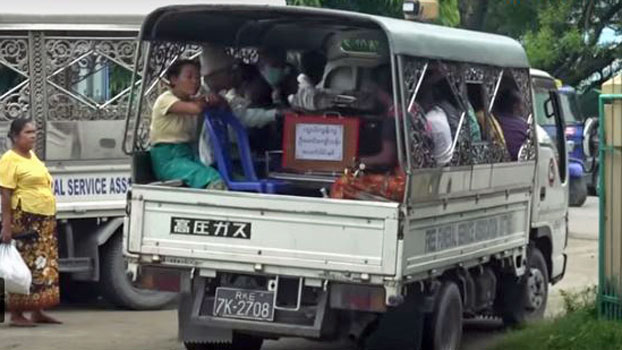 The relatives of Maung Kyaw Than, a villager who died of wounds sustained from a landmine explosion in Rathedaung township, western Myanmar's Rakhine state, transport his coffin from Sittwe, July 2020.
RFA video screenshot

A 66-year-old man who died after stepping on a landmine while tending cattle in western Myanmar’s Rakhine state last week joined a growing list of mine victims in the 19-month armed conflict between government forces and the rebel Arakan Army.

The hostilities in northern Rakhine and one township of adjacent Chin state have killed 266 civilians and injured 576 others between December 2018 and June 29 of this year, according to a tally by RFA’s Myanmar Service.

Of those killed, 27 have died from landmine explosions, while 64 others have been seriously injured by blasts as the death toll from mines in Rakhine rises in an area that previously wasn’t mined, local residents and activists told RFA.

Myanmar is riddled with mines from wars with numerous non-state armies affiliated with ethnic minorities since the country’s independence from Britain in 1948. Border areas with Bangladesh, China, India, and Thailand are heavily mined.

“New landmine casualties in areas of conflict between the Tatmadaw and the Arakan Army not previously known to have landmine contamination also indicate new use, by either the Arakan Army, the Tatmadaw, or both,” the Landmine and Cluster Munition Monitor said in a December report, using the Burmese language name for Myanmar’s military.

The Geneva-based NGO identified Myanmar as the only country in which government security forces deployed mines in 2019. A quarter of Myanmar’s 325 townships in 10 of the country's states and regions “suffer from some degree of mine contamination,” said the report titled “Landmine Monitor 2019.”

The latest Rakhine victim, Maung Kyaw Than, was in his village in Rathedaung township when the explosive device detonated and was taken to Sittwe General Hospital in the state capital for treatment, said his son-in-law Hla Sein Tun on July 2.

“We had been tending a herd of cattle for six or seven days,” he told RFA. “A cow ran into under a tree, and my father-in-law followed it. A mine was set up under the tree, and it exploded when he stepped on it.”

Hla Sein Tun, who was not in the immediate area when the blast occurred but heard it, called Maung Kyaw Than, but the man did not answer his phone.

“When we reached him, his limbs were gone, and he was almost dead,” the son-in-law said.

‘Afraid of those mines’

Local villagers say that landmines are a major risk for farmers and others who make their living by collecting firewood and  picking bamboo shoots and wild vegetables.

“If we cannot cut bamboo, then we will have no food,” said Maung Thein Kyaw, a resident of neighboring Kyauktaw township. “We depend on the forests, but now we are afraid of those mines, and cannot cut wood as usual.”

Rathedaung resident Bekker, who has been helping villagers who fled their homes to escape clashes or operations by Myanmar soldiers, said that both the government army and the AA are responsible for the mines, which they plant in civilian areas. Others who live in northern Rakhine concurred.

“Residents are still dying by mines and cannot enter their villages because they don’t know where the mines are set up around the villages,” Bekker said.

When battles end, villagers who left their communities usually do not return to them or plow nearby farmlands or walk along mountains because they fear being blown up by explosive devices, he added.

Those who are wounded by landmine blasts sometimes cannot reach hospitals in time because of roadblocks by Myanmar soldiers who delay vehicles from passing until they are sure that the occupants are not AA rebels.

Under those restrictions, it can take two hours before a vehicle and its driver and passengers are allowed to proceed, locals said.

The situation has been complicated by children and uneducated villagers who test or play with unexploded ordnance left by the armies, they said.

NGOs and other humanitarian aid groups say that officials should take measures to prevent any further loss of lives from mine explosions in the region.

“It is very important for authorities to initiate such programs, but as far as we know, there’s been no action from the government,” he added.

Both the Myanmar military and the AA have denied responsibility for last week’s landmine explosion. Each side blames the other for planting the devices whenever a blast kills or injures a civilian.

Myanmar military spokesman Brigadier General Zaw Min Tun told RFA in May that the AA has a history of placing mines in villages.

AA spokesman Khine Thukha has suggested that civilians might have stepped on mines that were left behind by Myanmar Army which did not clear them from areas they occupied.

RFA could not reach Win Myint, Rakhine’s minister of municipal affairs, for comment.