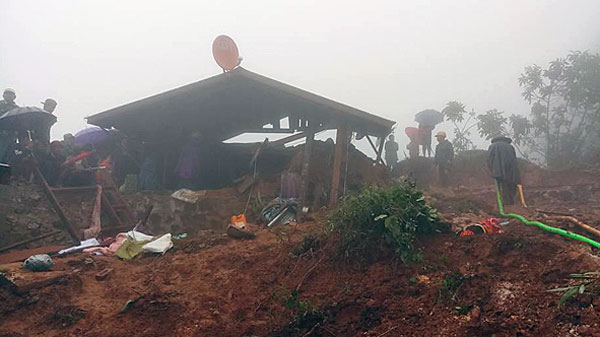 Heavy rains at the start of the annual monsoon season have battered parts of Myanmar, causing a landslide that killed five people in a township in Mandalay region, submerging homes in Rakhine state, and washing out roads in Shan state.

The five people were killed by the landslide in Mogok township, Pyin Lwin district, in central Myanmar’s Mandalay region, when they did not evacuate their home situated on a hill in time before disaster struck, Saw Thaung Tin, a state lawmaker from the ruling National League for Democracy (NLD) party who represents the township, said on Thursday.

The bodies were taken to Mogok Hospital at around 7 a.m., he said

Nine others who lived in two houses also on the hillside escaped before the landslide occurred and are now staying in a Chinese temple in the township, he said.

“The other people from the rest of the huts became worried that there could be landslides after the heavy rains, so they moved out and slept over at friends’ houses, and they escaped,” Saw Thaung Tin said.

“We have landslides in this place every year,” he added.

The township administrator has informed the Ministry of Social Welfare, Relief, and Resettlement about those who escaped the landslide, and the local community is now helping them out, he said.

Though the NLD has warned its party members not to stay on hillsides and to seek out safe places during torrential rains, township authorities have not issued any official warning for Mogok residents, Saw Thaung Tin said.

Annual monsoonal rains in Myanmar begin in June and run through October, with certain areas of the country usually hit harder than others.

Flooding from heavy rains has submerged 40 villages in Minbya township in Rakhine state, forcing residents to seek shelter in Buddhist monasteries and in the homes of family members who live on higher ground, Kyaw Thein Tun, the township’s deputy administrator said on Thursday.

Minbya officials have warned residents to move to safer places since June 13 and to contact relevant authorities through their village heads, he said.

“Since the rains began, we have warned people to be careful about floods,” Kyaw Thein Tun said. “We have formed an emergency operation center and have constant contact with village heads so we can tell them what they should do.”

“We are getting ready supplies of drinking water, dry noodles, and waterproof sheets for the roofs of houses,” he said.

Firefighters have also warned residents about exercising caution during heavy rains not only in Minbya, but also in the towns of Kyauktaw and Mrauk-U.

On Monday, the rains caused flooding and landslides that washed out a road connecting Ann, Taungup, and Thandwe townships in Rakhine state and stranded buses and cargo trucks, the Myanmar Times reported Tuesday, citing a fire department official.

In eastern Myanmar’s Shan state, heavy rains destroyed more than 30 homes on a hillside in Namhsan township, previously part of Kyaukme district but now part of the Palaung Self-Administered Zone, and caused landslides in the area, though there were no casualties, local officials and residents said.

Residents in areas prone to landslides during the monsoon season moved temporarily to other places when the rains began, they said.

“People in town know there will be landslides after heavy rain, so they moved out … and that’s why we didn’t have any casualties,” said Namhsan resident Kyar Thi.

Those who made it out in time are staying with relatives, and firefighters have warned others to be careful and have asked them to provide help to those who lost their homes.

“If it is keeps raining, we will lose a lot more, especially because almost all the roads around Namhsan are prone to landslides,” Kyar Thi said.

Rains also destroyed the main road between Namhsan and Thibaw, also known as Hsipaw, township which lies about 200 kilometers (124 miles) northeast of Mandalay, he said.

“Authorities are not taking care of the destroyed roads around Namhsan town, but they are repairing the main road to Hsipaw,” he said.

Those in Kyaukme district who lost homes can submit supporting documentation about their houses, the number of residents in the dwelling, and a recommendation letter from a local administrative official to the Department of Natural Disaster Management to receive 22 household items and hardware to build another house, a department official said.

Meanwhile, a 10-year-old boy died in Shan state’s Taunggyi township on Tuesday when he was washed away by rapidly flowing water in a ditch as he washed his feet after heavy rains, the online journal The Irrawaddy reported, citing a Naypyidaw disaster management department official.

Fourteen households with roughly 60 residents were flooded the same day in another part of Taunggyi, while dozens of others were forced to leave their homes on account of flooding in the town of Lashio in northern Shan state, the report said

Dozens of residents of Nan Lan village tract in Thibaw township were also affected by flooding, it said.

In Yangon, four people are missing after a small ferry operating between the commercial capital and Dala township on the southern bank of Yangon River sank on Wednesday evening after its motor lost power and it collided with a cargo ship at a jetty, said an official from the Myanmar Red Cross Society.

The incident, however, was not caused by bad weather.

“This happened during rush hour when people were going home in the evening,” said Kyaw Myo, a Red Cross official in Dala township. “The boat left for Dala from the Yangon jetty, and the boat’s engine broke down soon after it left. The boat flooded and started sinking in water current.”

Eight of the 12 passengers, including the captain, were rescued, though three were taken to a hospital in Yangon, he said.

A dozen Red Cross members and seven Dala jetty boat team members are searching for the missing passengers, he said.