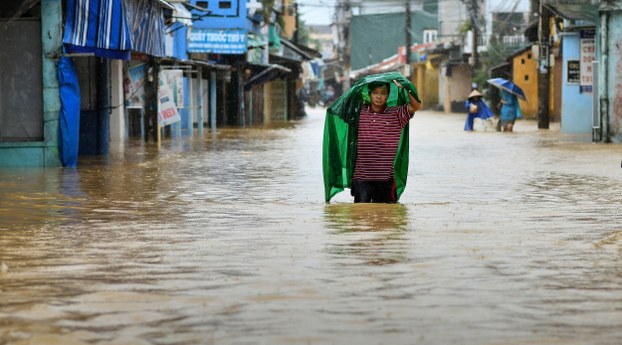 At least 111 people have now been killed in flooding and landslides in central provinces of Vietnam following heavy rains from Oct. 6 to 19, and further deaths are feared as waters continue to rise in rivers in Quang Binh province ahead of a coming tropical storm, sources in the country say.

Highways in the provinces have also been severely damaged, with the total cost of repairs estimated at around VND 355 billion, state media said, citing figures provided by the Directorate of Roads of Vietnam on Oct. 21.

Large-scale fundraising is normally restricted by law to state organizations or social associations to reduce the risk of personal gain, with penalties prescribed for violations. But National Assembly deputy Le Thanh Vanh voiced confidence in the work of Thuy Tien and her staff.

“They are ready to take responsibility before the sponsors who donated the funds,” Vanh said, quoted on Oct. 21 in state media reports. “I am sure they will be completely transparent,” he said.

Relief teams have poured for the last few days into central regions hit by floods and landslides that have destroyed roads and buried workers at a hydropower plant and soldiers at a military barracks, Deputy Prime Minister Trinh Dinh Dung told state media on Wednesday.

Many areas have already received help, while others remain cut off because of damaged roads, Dung said, calling on the Ministry of Agriculture and Rural Development to send more teams to reach remote areas and give further support to those already helped.

Relief work meanwhile continues in Cambodia, where 34 people have now been killed by floods to date, with Prime Minister Hun Sen urging local authorities to guard damaged homes to prevent looting and calling on banks and other lending institutions to delay or reduce payments owed to them by villagers impoverished by the coronavirus pandemic.

“COVID-19 has hit us hard for the last 10 months, and now we are facing floods that are destroying us,” Hun Sen said.

“We have not concluded our damage assessments yet. For now, we are just working to rescue people and take them to safer areas,” he said.

The 34 flood deaths reported so far reflect the inability of central government and local authorities to deal effectively with the disaster, said Kean Ponlok, secretary general of the Cambodia Intellectual Students Alliance.

“The authorities must look into the causes of these deaths and hold themselves responsible,” he said, adding that because of corruption in Cambodia, he is not convinced that all donations handed over to the government will be spent on victims of the floods.

Banteay Meanchey villager Nay Thoeun said she has now lost her home and job because of the floods and is debt after borrowing money from a bank to buy medicine to treat the tuberculosis to which she was exposed in her family.

“I am very worried. I’m living now under a shelter on a hill, but the water is still rising here, and I’m afraid of [venomous insects].”

“I’m urgently calling for aid to be delivered to this hill. There are many poor families here,” she said.

Flood begins to recede in Laos

In Laos, flood waters have begun to recede from eight districts in Savannakhet province, where 125 villages containing 5,134 families, or nearly 30,000 people, have been affected, Lao media sources say.

In the province’s Sepon district alone, 40 villages containing nearly a thousand households have been flooded, with many houses completely destroyed, sources said.

Sepon’s La Or and Vang Khot villages were hardest hit, with 44 houses swept away, and another 90 dwellings hit by fast-running floods and partly damaged, a district official said on Oct. 21.

“The district is still asking for help, but we will set up temporary refuges in the villages for people to live in,” the official said, adding that funds are being sought for building materials such as roofs and nails for the construction of temporary shelters.

Fast-rising water hit one village on Oct. 18 and swept away 28 or 29 houses, leaving nothing to come back to when villagers returned two days later, one villager said. “Now we have no place to stay in but the schools, and no one has any clothing. We are waiting to see how the authorities plan to handle this.”

“We are all in a very poor condition. We have no rice to eat, and all our rice fields are flooded. We will have to buy all the rice that we eat next year,” he said.

“The water is receding now, but the villagers’ houses are damaged beyond repair, and nothing can be restored. There is no thought of fixing them now,” a rescue team member said, adding that many residents of Sepon and other districts are still cut off because of damage to the roads.

Though Lao authorities had moved quickly to help victims of the floods, more help is needed, an NGO official said, asking that neither he nor his organization be named. “For a start, we urgently need dry food and drinking water, clothes, rice, and many other things, as so many houses have been swept away.”

“The authorities did go down to do everything they could, but there are just too many villagers to help,” he said.

Many residents in areas of Sepon and Phin districts are still out of reach, a Sepon district official said. “We are still unable to get to almost half of the areas affected by the floods because the roads have been cut off by landslides,” he said.

Losses in Savannakhet including houses damaged, livestock drowned, and paddy fields destroyed are still being calculated, the official Vientiane Times said on Oct. 21.