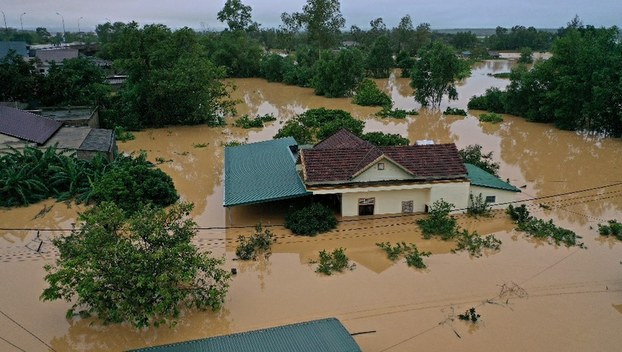 A village is shown flooded in Vietnam's Quang Tri province in an Oct. 18, 2020 photo.
Reuters

Floods, landslides, and other natural disasters triggered by downpours in Cambodia, Laos, and Vietnam have left scores dead, with paddy fields and rice stocks destroyed, and thousands displaced from their homes in a region hard hit by COVID-19 and its economic fallout, officials and state media said Monday.

In Vietnam, at least 90 are dead and 34 missing, with thousands of households evacuated from flooded areas to safer ground, state media and other sources say.

In Thua Thien Hue, nearly 40 thousand households have been evacuated, with some 121,700 dwellings reported still under water.

“At present, we are safe, but thousands of local households have remained without power for three days, and at first we couldn’t contact anyone for help,” a resident of Quang Tri’s Cam Lo district told RFA’s Vietnamese Service on Sunday after he and his family were rescued by boat.

“Now, we are holding up with instant noodles until the waters go down again,” he said.

News of a release of water from a local dam due to flooding never reached local residents, who were already cut off from outside contact, the source said, adding that his home was now submerged to a depth of two meters.

“[The authorities] said on Facebook that they were going to discharge water from the dam, but because our area was already isolated, we never got that news, and the flood hit us at midnight. We had no chance to get away,” he said.

A source named Thao in Quang Tri’s capital city Dong Ha confirmed that power outages had prevented residents in low-lying residential areas from learning that large quantities of water would be released from dam reservoirs.

“They announced this on Facebook, but no one in our area was connected to the internet, so we never heard anything about it,” she said, adding that rescue teams had arrived at her home at 5:00 a.m. on Saturday to take her and her children to a safer place.

Landslides on Oct. 12 and 18 also buried 17 workers and 13 members of a rescue team at the Rao Trang 3 Hydropower Plant in Thua Thien Hue province and 22 soldiers and officers at a military barracks in Quang Tri’s Hung Hoa province, sources said.

The bodies of the missing soldiers were recovered on Oct. 19, but searches continue for 15 of the 17 workers buried at the Rao Trang 3 hydropower plant.

More rain is expected to hit central areas of the country in coming days as a tropical storm forms in the South China Sea, called the East Sea in Vietnam, off the coast of the Philippines, with continued high risk of floods and landslides that have already damaged highways and roads, media sources say.

Villagers cut off in Laos

In Laos, storms have ravaged Savannakhet province in the country’s center, with authorities unable to access many areas due to damaged roads and not enough boats available to transport aid and other supplies, Lao sources said.

More than 100 villages in eight districts have now been flooded, with many houses and over 10,000 hectares of paddy fields submerged, official sources in the province say.

Heavy rains due to tropical storms along with an overflow of the Xe Ranong No. 1 Dam upstream were to blame for the devastation in Phin, a district agriculture and forestry official told RFA, saying that 35 villages in the district have been affected by floods.

“Around 502 hectares of paddy rice has also been flooded,” the official said, adding, “Things are hard, but we will have to endure.”

“People who live close by will get rice and dry goods more quickly than those who live far away.”

“[Some] houses have been damaged beyond repair, and the rice that the government gave us during the last flood is now almost gone,” the official said, speaking on condition of anonymity.

“A store of rice reserves with 50 sacks of sticky rice has been destroyed in this flood,” another villager confirmed, adding that he had been able to move livestock and other family valuables to high ground before the flood hit, but that clothes, utensils, and other household goods had been washed away.

“Our rice in the fields was almost ripe and was ready to be harvested soon, but the rain and floods destroyed it all. We are going to be hungry here next year,” he said.

District officials say that authorities have too few boats now to move people from flooded areas or to transport supplies to villagers cut off by the flood or by roads damaged or cut off by fallen trees. Phin district authorities are now working with the neighboring district of Champhone to convey dry goods, medicines, clothes, and gasoline for boats to those in need, sources said.

Floods in Cambodia have meanwhile killed at least 25 and seen 40,000 evacuated to temporary shelters, Cambodian national disaster management authorities said. More than 200,000 hectares of paddy field and nearly 80,000 farms have also been destroyed, with more than 500 school buildings and 79 garment factories damaged.

Roads, hospitals, and dams have also been affected, authorities said.

Cambodians in debt to banks or other lenders have been especially hard hit, with many left unable to work and make monthly payments to their creditors,

“I don’t know what to do,” said one villager from Banteay Meanchey province’s Mongol Borey district named Sareourm. “We don’t have enough rice to eat, even though we got a small amount of food aid on Oct. 18.”

Sareourn said he wants his creditor, a microfinance institution, to delay demands for payment until the flood waters recede, allowing him to look for a job.

“I can’t look for work now because I’m taking care of my grandchildren, and I can’t leave them behind because the flood is now up to the ground floor of my house. If my creditor doesn’t agree, I will have no choice but to sell off my house and land to pay my debt,” he said.

“I’m having real difficulties now,” added a villager from Battambang province named Chun Ry, who said that he can’t earn enough money now to pay back a loan from a microfinance company that helped him buy a small home and a motorbike to start a taxi service.

“Now, people are commuting to the markets and other places mainly by boat, though.”

“I park my bike on higher ground where I earn only about 20,000 riel [U.S. $5] per day, and half of this goes for gasoline. So it’s hard even to earn a living, not to mention paying back my loan,” he said, adding that he hopes the government can work with his creditor to cancel his payments for at least one or two months.