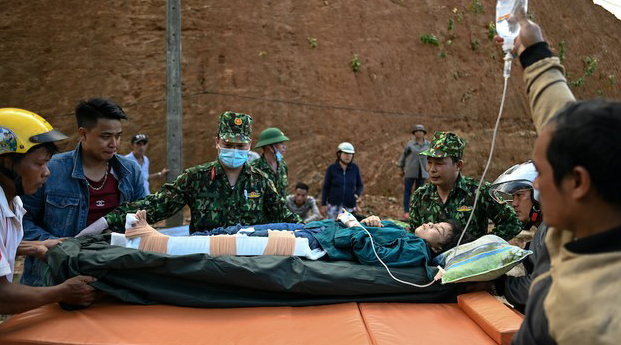 Vietnam is set to be hit by a new tropical storm later this week that is expected to slam into central provinces already devastated by weeks of heavy rains, flooding, and landslides, media sources say.

Tropical storm Goni, the tenth storm in the region this year, tore across the Philippines over the weekend, killing at least 20 and destroying tens of thousands of homes before moving into the South China Sea, called the East Sea in Vietnam.

Central provinces in Vietnam from Binh Dinh to Ninh Tuan are predicted to be hit by the new storm when it makes landfall, probably on Nov. 5, Mai Van Khiem—director of the National Center for Hydro-Meteorological Forecasting—said on Nov. 2, according to state media.

Heavy rains are also predicted to blanket central areas, with floods and landslides expected in low-lying parts of the region, government sources said.

On Oct. 28, Storm Molave, the most powerful to hit Vietnam in 20 years, had struck coastal provinces already devastated by weeks of heavy rains, floods, and landslides beginning Oct. 6 that left at least 130 dead and thousands displaced.

The floods and landslides also wrecked highways and roads, blocking efforts to rescue and bring supplies to many cut off from help in remote areas.

The death toll from Molave remains unclear, with state media on Nov. 2 reporting 29 dead and over 50 missing, clashing with wire service reports on Oct. 30 citing state media figures setting the total number of fatalities at 35.

Also in Quang Nam, 14 victims of a landslide in Tra Leng commune are still missing, and at least three thousand have been cut off by landslides from help, while tens of thousands of households in Nghe An and Ha Tinh provinces remain without power, state media said.