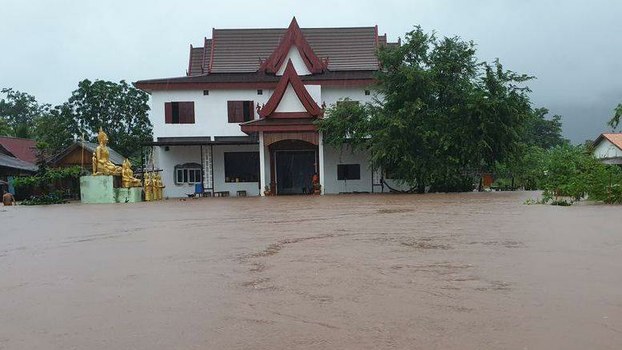 About a dozen are dead and hundreds displaced in Cambodia, Laos and Vietnam in the aftermath of Tropical Storm Noul, which slammed into mainland Southeast Asia last week, sources in the region told RFA.

The storm made landfall in Vietnam Sept. 18, just north of the central coastal city of Danang, raging westward into Laos before mostly dissipating there. Its remnants then barreled over into Thailand, leaving homes and farms flooded and roads buried by mudslides in its wake.

Cambodia was the hardest hit country in the region—11 people lost their lives—even though it was not in the storm’s direct path.

Khun Sokha, a spokesman for Cambodia’s National Committee for Disaster Management, told RFA that in addition to the 11 deaths, 500 were evacuated in eight different provinces.

The committee released a report Sunday saying the storm had caused damage in Koh Kong, Oddor Meanchey, Pailin, Sihanoukville, Kep, Pursat, Kampot, and Battambang provinces, all in the country’s western half.

The spokesman warned that after the flood, the people would need to prepare for drought because the Mekong River’s water level has remained low and the dry season is expected to last longer due to climate change.

“It is universal, not only in Cambodia. Countries all over the region are facing the same issue,” he said.

Moeul Chandara of the Cambodia Youth Network told RFA that for the past 10 years, the effects of natural disasters have been exacerbated by the destruction of forests, increased pollution and the filling-in of natural lakes and reservoirs.

He said that the government usually does not respond to natural disasters well.

“Let’s look at the facts. We have observed that filling-in lakes has continued under the pretext of development. It has affected many in the cities and the provinces,” he said.

Additionally, he said the government is not doing anything about climate change.

Just north of Cambodia in southern Laos, the storm left parts of Sekong and Champassak provinces flooded for a period of about three days. A 50-year-old woman in Sekong was reported missing and is believed to be dead.

“A woman died in Kalo village. She hasn’t been found. We’re still looking for her body. She was trying to cross the river, but it grew to be too large, so she couldn’t make it to the other side,” the resident said, a resident of Sekong’s Kaleum district told RFA Tuesday.

The storm also cut off a 100-kilometer (62 mile) stretch of road connecting Kaleum with Dak Cheung district in another part of the province. Landslides buried parts of the road in mud and soil.

“The road is badly damaged by the landslides. It is impassible. There is simply too much water,” the resident said.

An official from the Sekong administration headquarters told RFA that the province was preparing emergency supplies for flooding victims and was already rebuilding.

“We have some food, including rice, ready to be distributed. As for the road, a construction company is repairing it. Right now, cars cannot go through. Just motorcycles and pedestrians can,” the official said.

The official explained that the provincial government was still assessing the exact damage.

The discharge raised the level of the Xekaman River considerably, and residents downstream began packing so that they could flee to higher ground quickly in the event of flood.

The Sekong province official said that the dam had safety measures in place.

“We received notice from the dam management saying they are monitoring the dam and river water levels very closely,” the official said.

A resident downstream in nearby Saravan province told RFA that residents there were also preparing for floods.

“The water level of the Xekaman River is rising quickly, but has not reached a dangerous level yet,” the resident said.

Another villager said the Xekaman might overflow if the discharge continues.

In nearby Champassak province, several villages in multiple districts were inundated for more than two days.

“The water has receded but the damage to our rice paddies is great. Our initial estimate is that tat least 50 hectares (124 acres) of paddy was submerged. We’ll be able to assess the actual damage when it’s dry,” a village official from the province’s Xanasomboun district told RFA.

A district official told RFA that rice paddies were the only major casualty in Xanasomboun.

“Water didn’t go into the villages. Homes were not really affected, only the rice paddies were. It was raining so hard that the water couldn’t flow away fast enough,” the official said.

In Pakse, the capital of Champassak, roads and several Buddhist temples were flooded on Sept. 18.

The tropical storm also destroyed banana farms and homes in Savannakhet province, as well as two granaries and some chickens and ducks on farms in Xieng Khouang province on its way to Thailand.

Noul killed at least one and injured a dozen others in Vietnam before crossing into Laos, state media reported.

Reported by RFA’s Lao and Khmer Services. Translated by Max Avary and Samean Yun. Written in English by Eugene Whong.