10,000 Rally Over Shooting of Civilians in Myanmar’s Shan State 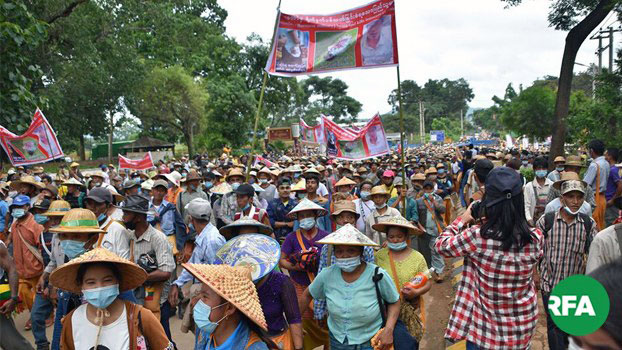 Thousands of residents march in protest against Myanmar military troops who opened fire in a civilian village, killing one resident and injuring another amid a clash with a local ethnic army, near Kyaukme town, northeastern Myanmar's Shan state, July 10, 2020.
RFA

Thousands of residents of Myanmar's northern Shan state protested on Friday over an incident last month when government troops allegedly killed one civilian and injured another in a clash with a local ethnic army, local residents said.

Shan state, Myanmar’s largest state and home to country’s second-largest ethnic group, has been under armed conflict between government forces and ethnic-based armies fighting for autonomy almost without pause since the former Burma gained independence from Britain in 1948.

The estimated 10,000 people who protested Friday in Kyaukme township were angered by a killing in late June during a showdown involving the government army and the Restoration Council of Shan State/Shan State Army-South (RCSS/SSA-S), one of seven ethnic armies operating in the state.

Amid a dispute over army accusations that the RCSS had crossed without advance notice into army-controlled territory when it burned a cache of illegal drugs to mark the International Day Against Drug Abuse and Illicit Trafficking, a Myanmar military column opened fire on June 29 as it entered Pan Kin village.

The shooting came two days after Myanmar troops detained Sai Maung, a man from a different community, and forced him to take them to Pan Kin village to search for RCSS troops. They later beat him unconscious and left him by a roadside where a monk found him and took him to a hospital, villagers said.

“For the injured, we want compensation for treatment as well,” he said. “We are protesting because we want justice for the man who was killed and the other injured people.”

During a two-mile march through town, protesters held photos of the dead man and injured villagers along with placards that read “No Military That Kills People.”

Police initially barred protesters who tried to enter Kyaukme town for violating COVID-19 restrictions on public gatherings, but later failed to stop the crowd, estimated by police to be about 10,000 strong.

“We had stopped them because of the Ministry of Health’s guidelines that prohibit gatherings of more than five people,” Banyar Oo, deputy chief of the Shan State Police, told RFA.

“Though they asked for permission to protest, we can’t let them do it at this time,” he added. “We will take action against the protesters who don’t have permission according to the law.”

Banyar Oo also said that the Myanmar military formed a court martial led by a colonel to investigate the shooting and beating incidents.

Local lawmakers said they filed a complaint over the human rights abuses with the Myanmar National Human Rights Commission.

“One of the victims was killed and the other was injured by irresponsible acts,” said Sai Tun Nyan, a state lawmaker from the Shan Nationalities League for Democracy (SNLD) party, adding that the middle-aged woman was shot at close range.

“We talked about this violation of human rights with our party leader, and four lawmakers from SNLD, including me, reported the case to the Myanmar National Human Rights Commission on July 2,” he added.

On Friday, the Myanmar military issued a statement saying that authorities would take action under the country’s Peaceful Assembly and Peaceful Procession Law against three protest leaders in He Kwi village — Sai Than Maung and two monks, Ashin Zawtika and Ashin Arlara.

The statement did not say how the three led the protest or what their specific roles in it were.

Myanmar spokesman Brigadier General Zaw Min Tun told RFA that the armed forces would not ignore the matter if the shootings and abuse were in fact committed by soldiers.

“There can be collateral damage due to any fighting,” he said. “The government army has been fighting the RCSS, and we’ve had casualties too, but we don’t know about civilian casualties.”

“If government troops violated rules, then we can’t ignore the findings of the investigation, and we will take action against them,” he said. “[But] we consider this protest to be a form of pressure [by the RCSS] because they did it without waiting for the results of the investigation.”

RCSS spokesman Lieutenant Colonel Sai Ohm Khay said that the ethnic army was not aware that locals were going to stage a protest.

Though the RCSS/SSA-S is a signatory of the government’s nationwide cease-fire agreement (NCA) — the only ethnic army in Shan state to sign the 2015 pact — tensions with Myanmar troops have reignited over troop movements into each other’s territory.

The latest flare-up occurred despite a temporary unilateral cease-fire declared by Myanmar forces and in effect from May 10 to Aug. 30 to prevent and contain the spread of the coronavirus.

Clashes between the RCSS/SSA-S and Myanmar forces on June 23 and 26 in Kyaukme and Namtu townships forced about 940 civilians to flee their homes, according to the United Nations Office for the Coordination of Humanitarian Affairs (OCHA).

Humanitarian groups and local authorities have provided basic emergency assistance to the displaced villagers, the organization said in a regional briefing issued in early July.

“Until these incidents, fighting and displacement in northern Shan state was on a downward trajectory compared to 2019 when an estimated 26,000 people were temporarily displaced in the area due to sporadic clashes throughout the year,” OCHA said.