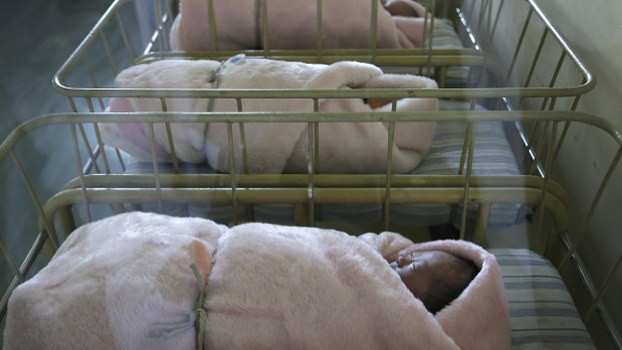 Newborn babies are seen bundled up at the Pyongyang Maternity Hospital during a press tour on Saturday, May 7, 2016 in Pyongyang, North Korea.

Authorities in North Korea have censured a Pyongyang hospital for corruption after a pregnant woman at the hospital died because she was refused treatment when she could not pay a bribe to hospital staff. Six obstetricians were dismissed from Pyongyang Maternity Hospital, which had been known nationwide as the country’s top hospital for women’s health.

“There was a complaint from a local citizen that a pregnant woman died unfairly due to widespread corruption [including demands for bribes] at Pyongyang Maternity Hospital, which is advertised as a free modern medical facility,” a source from Pyongyang told RFA’s Korean Service.

“The person who made the complaint was a relative of the woman who died. She was from [Pyongyang’s] Songyo district,” said the source, while visiting Dandong, China.

The source recounted the moments between when labor started and when the woman passed away.

“As it became difficult for her to breathe, she went to see a doctor at Pyongyang Maternity Hospital, but she was forced to sit in the waiting room because she didn’t bribe [hospital personnel]. She ended up dying because of respiratory arrest, and so did the baby,” the source said.

According to the source, the hospital tried to absolve themselves of any responsibility following the woman’s passing.

“After [her] sudden death, Pyongyang Maternity Hospital said the local ob-gyn in Songyo district [was at fault] for not properly examining the mother’s health while she was in the early stages [of pregnancy,] and had no treatment plan [in place],” the source said.

“The woman’s family said she would never have died if they had treated her in time,” said the source.

Word of the incident spread among the residents of the city shortly after her death, and the authorities made damage control efforts.

“After the story spread that [she] died because she didn’t have the money, the Central Committee [of the ruling Korean Workers’ Party] fired six of the obstetricians at Pyongyang Ob-gyn to try to win over the public,” said the source.

But people were angry that the medical authorities had allowed such corruption in the first place.

“The public had already turned their backs on them and are now blaming them [for what happened],” said the source.

The hospital had a sterling reputation prior to the incident, according to the source.

“Pyongyang Maternity Hospital used to be called ‘the cradle of happiness’ because of their [quality] free-of-charge medical care. They even helped women pregnant with triplets from other regions of the country [back in the 1990s],” said the source.

In North Korea it is rare that people from regions outside the capital would have access to any institutions reserved for Pyongyang’s privileged residents, much less a state-of-the-art hospital. That Pyongyang Maternity Hospital was known to treat outsiders, especially in the 1990s, when the country was struggling with economic collapse and famine, would be seen almost in the same light as charity in the eyes of Pyongyangers.

“But now in the Kim Jong Un era, Pyongyang Maternity Hospital gives preference to the families of powerful high-ranking officials, and ordinary women need to bribe doctors to deliver their babies,” said the source.

“My close friend is an obstetrician and I was surprised when I went to his house. I don’t know how much he receives in bribes, but at his house he has foreign-made furniture and his living standards seem to be higher than even members of the Central Party,” said the source.

The source detailed how Pyongyang Maternity Hospital is even more exclusive outside of its maternity ward.

“The gynecology ward is on the seventh and eighth floors,” said the source, adding, “Most of the patients there are wives of high-ranking officials and wealthy women.”

“Bribes for the treatment of gynecological conditions are more expensive than for childbirth,” said the source.

According to the website of the California-based nonprofit Liberty in North Korea (LiNK), North Korea claims to offer its citizens universal health care, but after a system-wide collapse in the 1990s, healthcare is now only functional in the capital. Citizens living outside the city can now visit the doctor only if they have the ability to pay.

The New Humanitarian published an article in February that cited figures from North Korea’s Central Bureau of Statistics that showed the maternal mortality rate fluctuating between 62.7 and 82 maternal deaths per 100,000 live births in recent years

The article also noted that the World Bank’s 2018 figure for maternal deaths is 11 per 100,000 in South Korea, less than one-fifth the rate in North Korea.

The key cause of North Korea’s maternal health issues was malnourishment, according to The New Humanitarian.